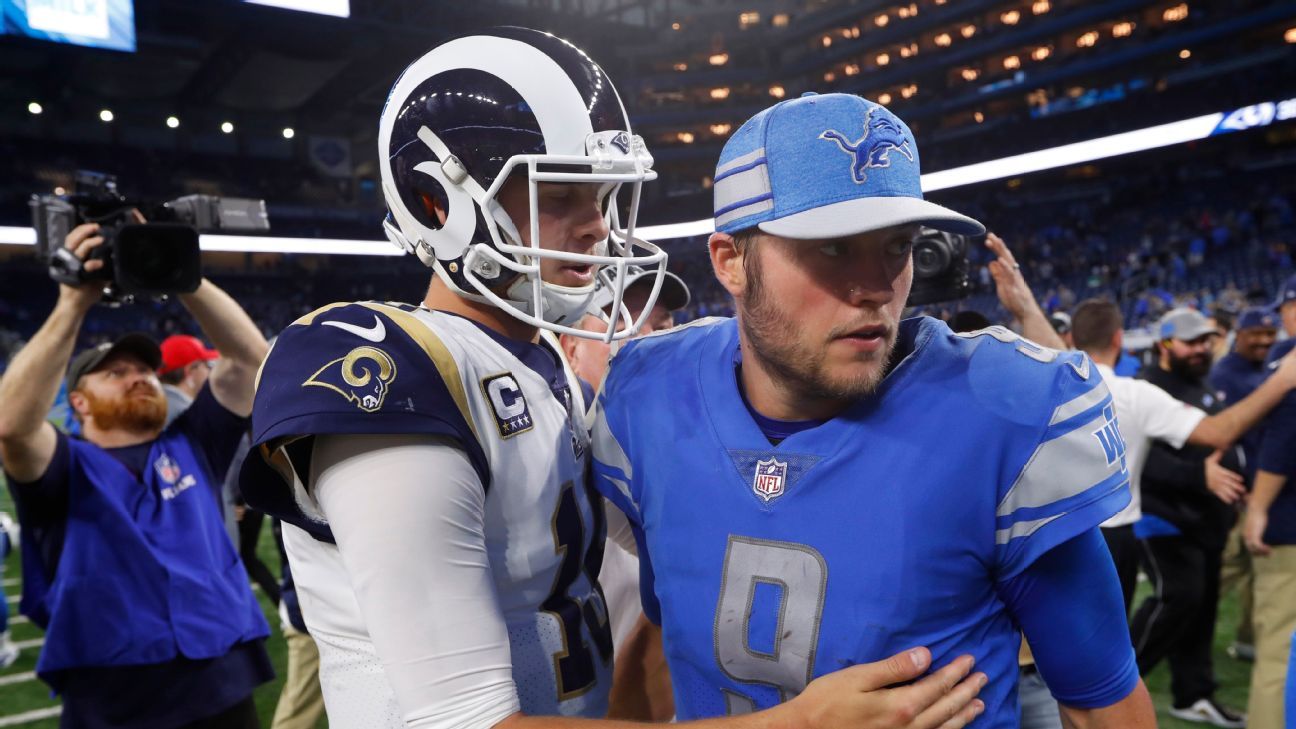 While it’s unclear what the Rams can do with quarterback Jared Goff’s long-term deal on the books, they’ve inquired about Stafford’s services and explored what it would take to get something done with Detroit, sources said.

Cutting Goff would cost the Rams $65.2 million in dead money; trading him would cost $22.2 million. Goff signed a four-year, $134 million extension with $110 million guaranteed in the 2019 offseason after Goff and the Rams made a trip to the Super Bowl.

The Lions’ front office is familiar with the Rams’ salary-cap situation. General manager Brad Holmes was a longtime Rams executive before landing his GM job in Detroit earlier this month.

Rams general manager Les Snead said earlier this week that it would not be easy to overcome the amount of money invested in Goff but added that “anything can be done” in a salary-cap system when asked if it would be possible to move on from the former No. 1 pick. Coach Sean McVay also was lukewarm in his public support of Goff, saying he’s the quarterback “right now” when recently asked about Goff’s status as a 2021 starter in Los Angeles.

And Goff was aware the Rams would likely weigh quarterback options this offseason, with some people around the league believing Goff would welcome a fresh start elsewhere. Goff has 18,171 passing yards, 107 touchdown passes, 55 interceptions and 42 regular-season wins since entering the league in 2016.

The Lions and Stafford last week mutually agreed to a separation. A source familiar with the situation told ESPN on Saturday night that the Lions would be looking for “fair market value” for Stafford, who is the franchise leader in every major passing category.

NFL teams started reaching out to the Lions about Stafford earlier this week, sources told ESPN’s Adam Schefter. Several teams have interest in Stafford, with multiple executives around the league believing the Indianapolis Colts and San Francisco 49ers, among others, will be involved.

Stafford is prioritizing the chance to compete for championships above all else in the process of finding a new NFL home, sources said.

Trading Stafford will mean $19 million in dead money for the Lions in 2021, saving Detroit $14 million in cap space for next season. There’s also a deadline of sorts because Stafford has a $10 million roster bonus due the fifth day of the new league year, which begins March 17.

Perspective teams could attempt to extend Stafford’s contract to cultivate a long-term commitment.

Stafford will leave Detroit, whenever he is traded, having thrown for 45,109 yards and 282 touchdowns with 144 interceptions. The Lions made three playoff appearances with Stafford, losing in the wild-card round all three times.

ESPN’s Michael Rothstein and Lindsey Thiry contributed to this report.

Russian anti-Putin anger spreads: 'We have to protest'