Thirteen days of contact tracing, postponements and injuries for the Wizards 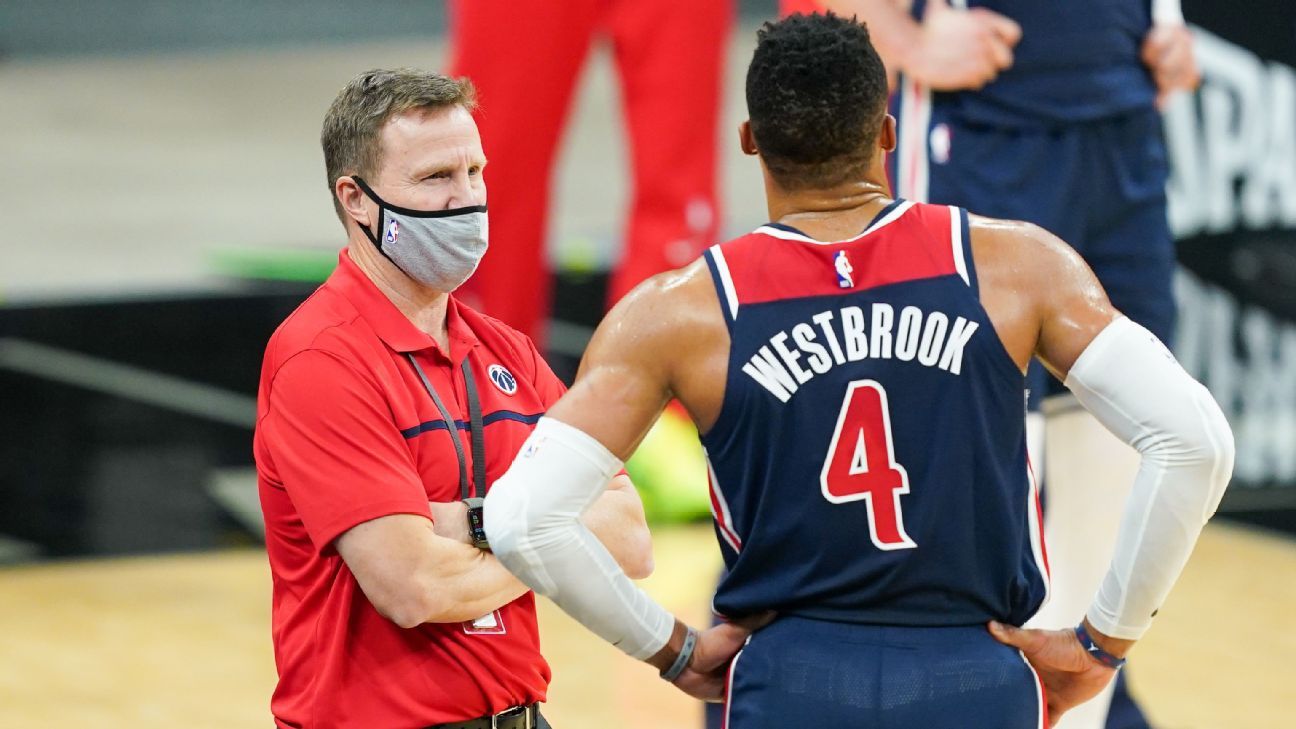 
For nine days, the closest Washington Wizards head coach Scott Brooks came to some of his players was when he would pass by them on his way in or out of the gated parking lot where they received their daily COVID-19 tests. Brooks would wave and honk. No one dared roll their windows down — just to be safe. And while he flashed a friendly smile when passing by, the coach was hiding his own anxiety and fear.

As seven Wizards players entered health and safety protocols over a four-day span in early January, Brooks was thinking the same thing as everyone in the organization.

“‘I’ve been testing negative,'” Brooks told ESPN, thinking back to the 13-day pause between games. “‘Does that mean I am going to test positive tomorrow?’ I am thinking, ‘I know we have a bunch of guys [in the protocols]. OK, I’m next. I am with these guys during timeouts, with these guys at halftime. When am I going to get my positive test?'”

“And no matter how tough you wanna be, it’s still scary,” Brooks said. “People are dying over this.”

There was one false positive test for a staff member, but Brooks and the Wizards’ staff stayed coronavirus-free. Davis Bertans, Rui Hachimura and Moritz Wagner are set to play against Atlanta on Friday. And while Deni Avdija, Troy Brown Jr. and Ish Smith remain out due to health and safety protocols, they could return against Brooklyn on Sunday.

The Wizards organization came to a halt after a 128-107 win over Phoenix on Monday, Jan. 11. The next day, two players entered quarantine per the health and safety protocols. The day after that, three more players followed. By that Friday, a total of seven Wizards were in the protocols.

“These guys are young,” Wizards general manager Tommy Sheppard said Thursday night. “And they are away from their families. Rui’s entire support network is in Japan. Wagner’s parents are all in Germany. Bertans, his wife is pregnant, he had to be away from his wife and kids. Everybody had a unique thing they had to fight through. I am really proud of our team. The last three games were really trying because we were really down to the bone.”

Since Washington’s postponement against Phoenix, the NBA has taken a more proactive approach to limiting the spread of the virus. The league and the National Basketball Players Association agreed to tighten their health and safety protocols, including prohibiting guests into both player and staff hotel rooms on the road and limiting player interactions on the court before and after games.

As of Wednesday, the NBA had postponed 22 games due to teams not having the minimum number of players necessary to safely play in accordance with health and safety protocols. Twelve of those games have involved the Wizards and the Memphis Grizzlies.

“[The NBA is] learning things as we are going. And I am assuming they learned a lot from us,” Brooks said. “I see that more often now, somebody has [the virus] and they shut it down for a couple of games. Because I think it is better to miss two than to miss six.”

The NBA certainly watched what the Wizards went through. The organization noted how it played a string of seven teams (Chicago Bulls, Minnesota Timberwolves, Brooklyn Nets, Philadelphia 76ers, Boston Celtics, Miami and Phoenix) that had players in or later enter the protocols after facing Washington.

“Each iteration or incident is because they’re watching contact tracing, they are watching video,” said Sheppard, who along with Brooks praised the NBA. “They see this and learn from that, and immediately you can adjust.”

The Wizards’ issues with injuries and the coronavirus this season so far has netted them a 3-11 record, the worst in the NBA. Their star guard Beal has been visibly and vocally frustrated after losses. On Jan. 20, Beal voiced concern about the Wizards playing so soon after being cleared to practice with just eight players. The NBA postponed the Wizards’ ensuing game against Milwaukee shortly after Beal and Brooks spoke up.

After scoring 47 points in a 124-106 loss to New Orleans on Wednesday, Beal was asked if he was frustrated with losing and how the season has gone.

“Is the sky blue?” Beal replied.

With nearly half the roster returning from health and safety protocols, the Wizards are optimistic that some level of normalcy can return to their season.

“I think [Beal] is looking at this realistically, these are things that are completely out of our control,” Sheppard said. “Life happens. All these little things start popping up, and you just go, ‘Doggonit. It has been a janky start to the season, for sure.’ There has been a lot of fits and starts.

“But now you see a little bit of blue on the horizon.”