Israel coronavirus: some ultra-Orthodox Jews resort to violence and slurs over lockdowns 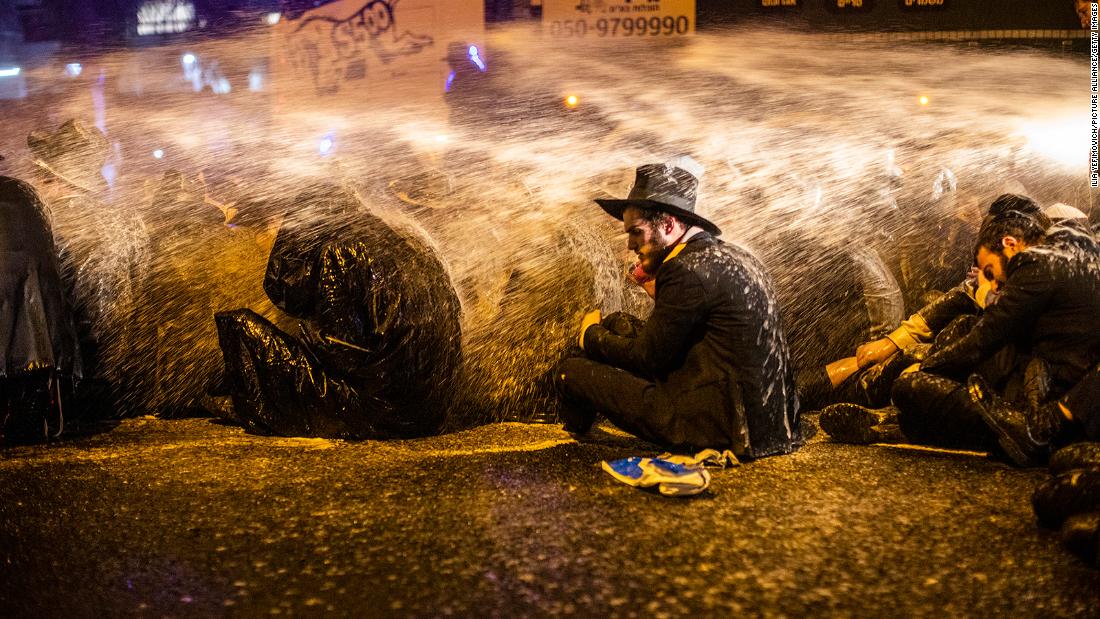 More widely, police actions against them are seen by many Israelis as a long overdue effort to end the exceptionalism that has characterized the ultra-Orthodox for decades. It’s allowed them to shirk military service, live on state benefits and often act as king makers in Israeli politics, critics and political rivals say.

Bnei Brak, a largely ultra-Orthodox city of more than 200,000, and the small Jerusalem neighborhood of Mea Shearim have seen the worst of the violence.

Extremists within the community have been blamed for graffiti on a Jerusalem wall which said that the city’s police chief was “Hitler.”

The atmosphere has become so febrile that some Haredim, as the ultra-Orthodox are collectively known, have pinned yellow Star of David badges on their jackets and labeled recent police crackdowns in Bnei Brak as “Kristallnacht.”

These allusions to the Holocaust and allegations of Israeli “Nazism” have been widely and immediately condemned by rabbis and politicians from within the Haredi community. But the same leaders have been equivocal, at best, over whether to obey the country’s lockdown and social distancing regulations during the Covid-19 pandemic.

The leader of the Lithuanian ultra-Orthodox community, Rabbi Chaim Kanievsky, has repeatedly ordered the community’s schools to stay open in defiance of government regulations over many months. Recently the rabbi is reported to have said that they should not open if confrontation with the police looked likely.

The rate of Covid-related deaths in people over 65 among the ultra-Orthodox was estimated last December to be about 3.6% higher than the Israeli norm, according to the Ministry of Health.

Health ministry data show Haredi communities to be suffering infection rates of well over 20% of those tested, and ultra-Orthodox patient admissions are among the highest in the country.

Haredi families have an average of seven children and are (alongside Israeli Arabs) the poorest community in the country. They live in densely packed areas where the men are encouraged to spend a lifetime in religious study.

Almost half of the Haredi population lives in material poverty, according to the OECD.

Although rarely integrated with other parts of Israeli society, they live highly active social and religious lives. Gathering frequently in large numbers is a central part of their cultural life.

“Every day for hours, we are in synagogues, we are meeting each other, we are together in lessons, we meet the rabbis every day, more on Shabbat,” Dov Halbertal, an ordained rabbi and expert on Jewish law, told CNN.

“In the end it is very difficult practically [to socially distance]. Besides we are big families, we have people of every age, we have 10 people in one small apartment, it’s very difficult… To be locked in the apartment, you are used to a social life,” he said.

An ultra-Orthodox Jew himself, Halbertal is also deeply critical of fellow rabbis who, for almost a year, have led their communities in rebelling against nationwide regulations intended to lower Israel’s Covid-19 infection rate.

He said that many rabbis feared their followers would suffer spiritual damage if they stayed away from study and communal prayer. And that some feared younger members would stray from their congregations altogether.

“The rabbis can lose their power over communities,” Halbertal added.

But he condemned the Haredim for putting themselves above secular laws intended to save lives.

Halbertal spoke on a street in Mea Shearim where almost every corner is plastered with posters announcing the recent deaths of ultra-Orthodox people. They have not all been killed by Covid, but it’s hard to avoid a sense that there are more of these black-and-white notices than usual.

“I love the ultra-Orthodox that I belong to. But I see that the moral failure is so deep and for me I cannot sleep at night thinking of the deaths — of their blood in the earth shouting for us. We fail in the time of our test, of our moral test as religious people,” said Halbertal.

Israel’s government is considering extending a strict lockdown due to end on Sunday for another week, and some politicians have called for a doubling of fines for breaches of social distancing regulations.

Infection rates and deaths have been falling slightly but they remain high even as Israel continues to lead the world in vaccine rollout, with around a third of those targeted for vaccination having had their first shots.

Bnei Brak’s mayor, Avraham Rubinstein, insists that his city is getting to grips with the Covid regulations and condemned violence and attacks on the police.

“There are a few people who are behaving violently. We denounce them. We don’t want them, and their own communities don’t want them. Their communities gave them over to the police,” he said, just a few days after he’d been personally threatened on the city’s streets by mobs of extremist Haredi youth.

Rubinstein insisted that most schools and synagogues are closed and that the municipality was vigorously driving the vaccination campaign. But health ministry data suggest it still has far to go in places like Bnei Brak, with just 12% receiving their first dose. Many other Haredi communities are in the low single figures.

Part of this poor vaccination record may be explained as a result of a boycott encouraged by anonymous red posters seen all over Mea Shearim.

They say that the media is part of a plot to hide evidence that the inoculation campaign began at the same time that a new Covid variant emerged in UK and dub the shot a “vaccine of death.”

These same posters may also be why a CNN team filming in the area was attacked by yeshiva (religious school) teenage students who tried to break a camera, and called the media “murderers.”

Michael Schwartz contributed to this report.