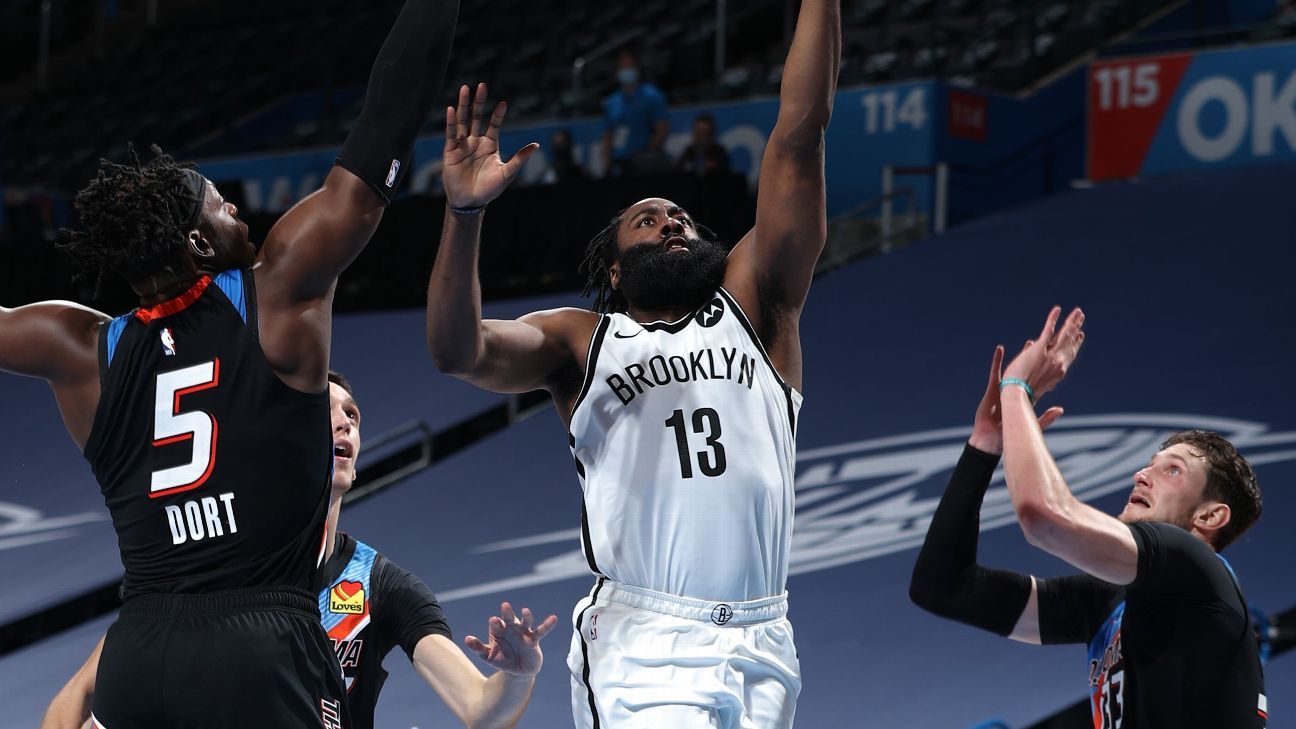 
OKLAHOMA CITY — Even with the NBA’s second-leading scorer sitting out, the Brooklyn Nets matched a franchise record Friday for the most points in a regulation game, dropping 147 on the Oklahoma City Thunder in a 22-point win.

“We’re getting there. … We’re slowly inching forward on both ends of the floor,” coach Steve Nash said. “We struggled defensively at times, but we’re getting more solid with our game plan defensively. Offensively, you’re starting to see a little more flow. You’re seeing James [Harden] able to manage the game like that and manipulate the defense.”

With Kevin Durant sitting as part of a resting plan as he continues to work back from his Achilles injury, Kyrie Irving and Harden took the reins, combining for 50 points — 25 apiece.

“We’re catching a rhythm, obviously, offensively,” Harden said. “But defensively as well. We’re learning our strengths and our weakness and things we can get better at.”

The Nets’ offensive explosion has been steadily building, with 10 of their past 11 games featuring at least 110 points. But they’ve also been, to put it kindly, mediocre on the defensive end. The Thunder, who entered the game last in offensive efficiency, still put up 125 points while shooting 46.5% from the floor.

“There’s a familiarity growing, on both ends of the floor. [But] we’ve got a long way to go defensively,” Nash said. “It’s not our forte or strong suit, but we’ve got to be clean with our game plan and talking and participating in our actions.”

Harden and Irving spent various parts of the game orchestrating solo as Nash staggered their minutes. But there were also long stretches in which they played off one another, with Harden doing his usual isolation drive-and-kick thing, while Irving flashed his finishing ability in the paint.

“I’m always gonna say I won’t take any day for granted. This doesn’t happen often in history where you have this group together at this point,” Irving said. “Some of the guys were starters on their respective teams last year; some of the guys are MVP candidates. And to have all of that collective talent and not get the most of it, we’d be doing ourselves a disservice. So we just want to continue to push each other and hold each other accountable.”

Harden credited the overall communication improving among the group, with assignments, coverages and adjustments being called out clearly throughout the game. Irving and Harden were at the front of the scoring, but there was impressive balance to the game as well, with nine players total finishing in double figures.

“It’s very satisfying anytime you get a win, but anytime the whole team plays well and you do some great things as a collective group, it definitely stands out of the rest,” Irving said.

The Nets have won four straight and are 6-2 since making the trade for Harden. There have been some rough spots at times, with Harden going extended stretches less involved in the offense, or Irving’s efficiency dipping, but the chemistry has been building, Nash said, and is something he only expects to improve.

“Offensively, I think guys are getting a feel and a rhythm for one another, how guys like to play, where they like the ball, how they like to move, cut and play off each other,” he said.

Harden said the Nets are maintaining an eye on the process, noting that it’s only going to get harder as the season progresses. As the games get bigger and the season gets smaller, there will be more of a spotlight on the Nets’ chemistry and how they execute.

“We’re gonna be challenged every night; we’re going to get everybody’s best shot,” Irving said, “but what we’re doing now is just finding the continuity to utilize the strengths we have.”