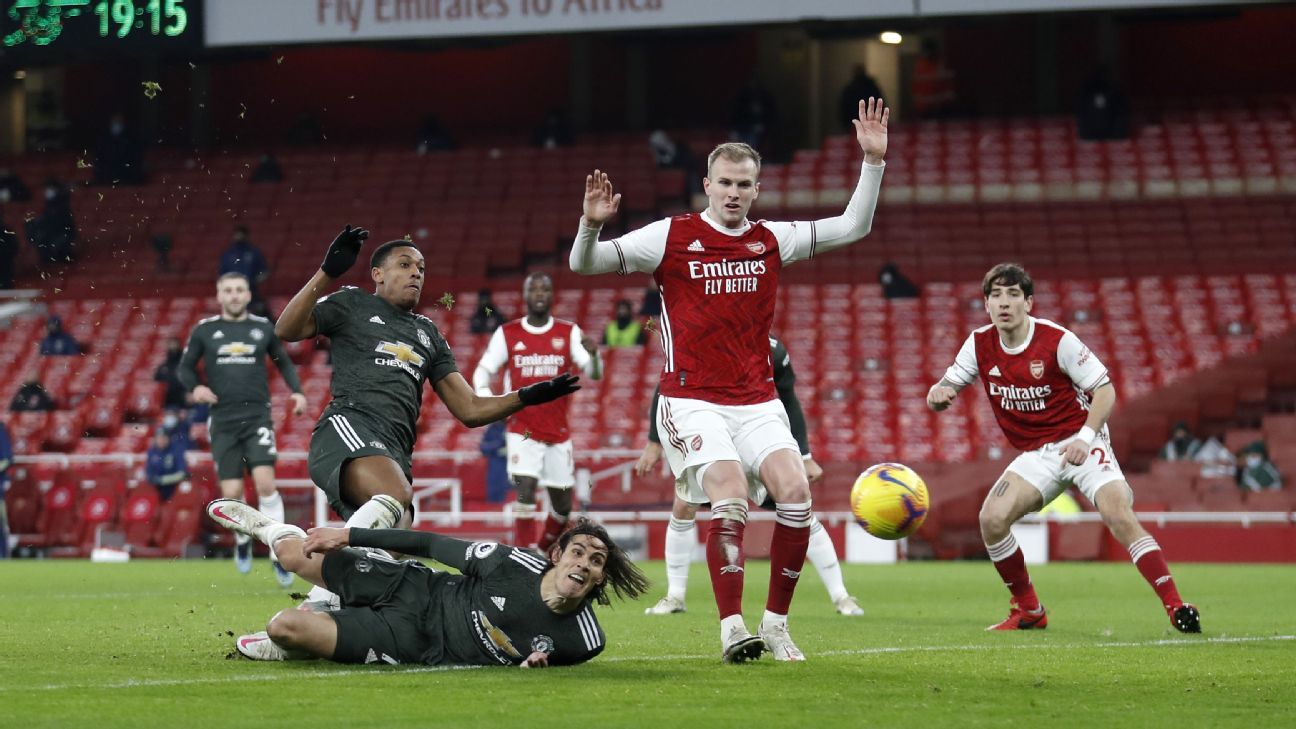 
Manchester United must learn how to beat the best if they want to be the best once more. Neither they nor Arsenal may be the force of old, but both are still members of the Premier League’s “big six” and, with the Gunners depleted through absentees, a 0-0 draw represents another missed opportunity for United, classified alongside a stalemate with Liverpool earlier this month.

And while it would be tempting to highlight Wednesday’s defeat to Sheffield United as evidence of their fallibility, a more sustained pattern for Ole Gunnar Solskjaer’s has come in matches against their closest rivals; in six matches against Man City, Liverpool, Tottenham, Chelsea and Arsenal this season, United have yet to win, with four draws and two defeats.

Scoring would help. The conclusion of this latest outing means it is 538 minutes since their last goal against their main rivals, and that was a Bruno Fernandes penalty in a game against Spurs, which ended in a 6-1 defeat.

United certainly had their chances at Emirates Stadium and Solskjaer highlighted three big moments: The first came in a first half his side largely dominated when Marcus Rashford could not get a shot away when the ball arrived to him at the back post; the second and third were spurned by Edinson Cavani in a more even second period.

Cavani somehow missed an open goal when Luke Shaw fired a cross at him, then directed an acrobatic volley flew inches wide, one minute from full-time. The frustration in front of goal was reminiscent of similar shortcoming against Liverpool earlier this month, when Bruno Fernandes and Paul Pogba could not beat Alisson with opportunities to win the game.

“Every game in the Premier League is tight, but the two you are talking about, we felt we were close to winning them,” Solskjaer said. “We had two massive chances against Liverpool, two good saves by the ‘keeper. Today, two massive chances again but just wide. To get those four extra points, we need a little bit more quality and be more clinical. We went for it today; we felt the game was there to be won.”

And it was, just like at Anfield, when the Premier League champions were bereft of key players and appeared more vulnerable than usual. Arsenal’s line-up was minus arguably their three most influential players, with Pierre-Emerick Aubameyang in quarantine after tending to his sick mother, Bukayo Saka not risked due to a sore hip and Kieran Tierney failing to recover from a calf problem.

Whether subconsciously sitting back as a result or forced to do so by United’s intense high press, Arteta’s side played on the counter-attack in the opening period as the visitors controlled the early exchanges. Fred went closest to the opening goal, but home goalkeeper Bernd Leno made a brilliant save to push a floating, goalbound shot around the post.

Despite losing another key man at half-time with the withdrawal of Gabriel Martinelli, Arsenal improved after the restart as Alexandre Lacazette hit the crossbar with a superb free kick and Nicolas Pepe went close with a low shot that skimmed wide.

“We made some changes with a few things that we had to fix to be much more efficient, to be much closer to them, to be more effective in our high press and the areas where we could regain the ball and then we had a better structure to attack,” Arteta said later.

“We were more of a threat and we stopped giving the ball back to the opponent when we won it and we had much space to run, which is something that against United can really punish you and in the first half we didn’t do that well enough.”

However, United had the best chances after the break as well, only for Cavani to fall short. The 33-year-old has had a positive impact since moving to Old Trafford last summer, but has scored just one goal in nine league games since his two-goal rescue mission at Southampton on Nov. 29.

Meanwhile, Fernandes is the undoubted United talisman and, as is invariably the case, if he does not fire, neither does his team. The Portuguese midfielder went close with one first-half effort but it is five games since he scored or made a goal in league play. United’s mini-slump — they have one win in their last four — is no coincidence.

But four points from 18 available in big-six showdowns is not enough to sustain a title challenge. Solskjaer’s record against the same teams last season was much better, but he is being judged by higher standards this term; the lowest tally any of the previous 10 champions have managed is 16, a mark that United can only equal by winning their last four battles of the English giants.

“We need of course to take our chances and we’ve got the players to do that, we just haven’t done it,” United’s manager said. “We just keep on working, keep on working with them on the training ground. Definitely, we have something for our forwards to sort out. But they’ve scored so many goals throughout their careers.

“We don’t think about the title race or the title now,” Solskjaer added. “We’re in January. We are just focusing on getting back on the road. I think the disappointment [against Sheffield United] was big. The point today gives us more belief again because we feel we dominated. The reaction and the approach to the game was very good.”

Both sides can accentuate the positives. Arsenal have kept five clean sheets in six league games since beating Chelsea on Dec. 26 and were able to give loan signing Martin Odegaard his debut as a substitute, while United set a club record by completing an 18th consecutive away game without defeat.

But there will also be accompanying sense of what might have been. And for United in the big games, it is a familiar feeling.