‘So excited to be uncomfortable’ 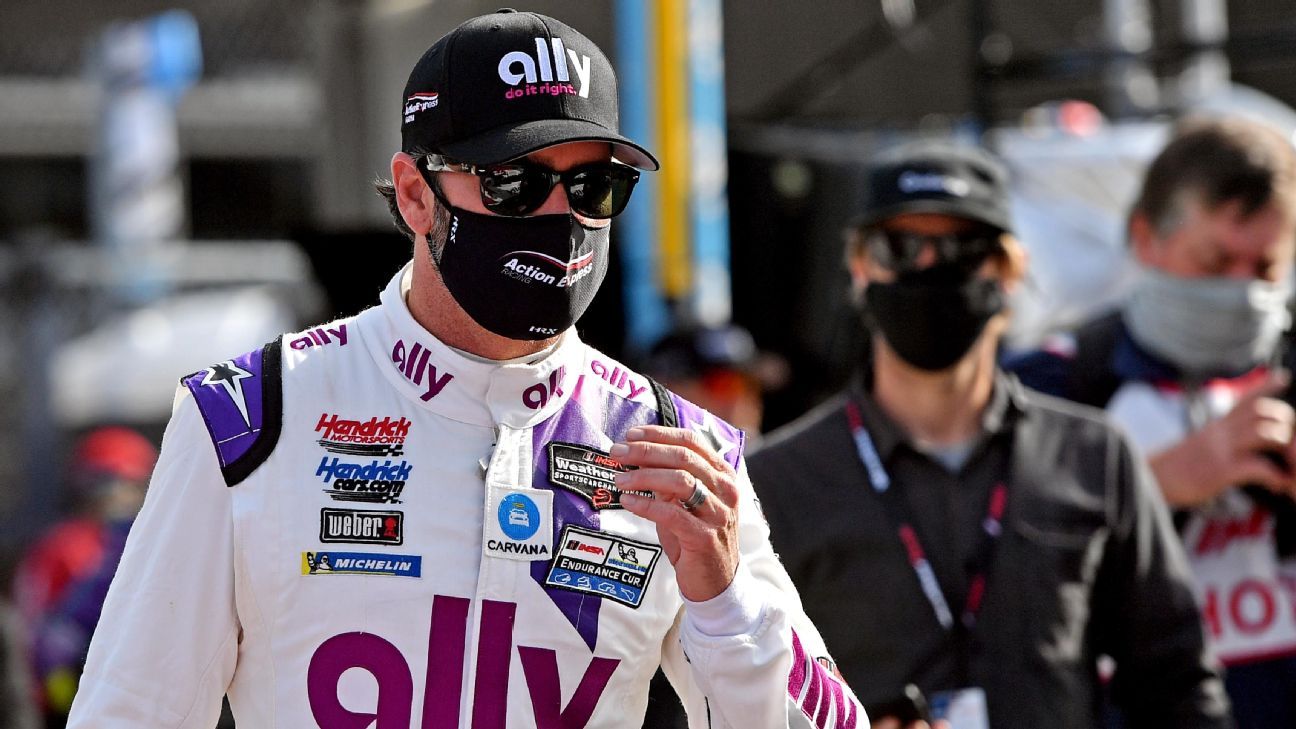 
The nerves hit Jimmie Johnson as he stood on the starting grid before the Rolex 24 at Daytona.

The seven-time NASCAR champion is beginning a new chapter of his career — at 45 years old — in unfamiliar race cars. He was tabbed to start the most prestigious sports car race in America for his Action Express team and Johnson had just one goal for his first stint in the Cadillac.

“Certainly didn’t want to break the toy in the first couple of hours,” Johnson said after driving about 70 minutes Saturday around Daytona International Speedway.

He gave the No. 48 over to teammate Simon Pagenaud and then turned to Kamui Kobayashi, the two-time reigning winner of the Rolex 24, for an animated debrief.

Johnson, a little more than two months removed as the most dominant NASCAR driver of the past two decades, has “jumped into the deep end of the pool with weights on my ankles” as he transitions into new formulas of racing. This Rolex 24 is the eighth of his career but first in a decade, and it’s a warm-up for his move to IndyCar, where he’ll be a rookie in a field stacked with drivers half his age.

His career change has made for a busy offseason of testing alongside some of the top drivers in the world, and the demands have lit a spark in Johnson. He was winless in the final three seasons of his NASCAR career.

“I know the world that I’m stepping into, and I know what I walked away from and the comfort that I had there, and I’m very aware of how uncomfortable I am going to be stepping into this new arena, and it makes me feel alive,” Johnson said. “I am so excited to be uncomfortable and so excited to learn something new, so excited to drive these cars and really kind of grow as a driver and have a bunch of new experiences in life.

“It makes me feel more alive than I have in quite some time.”

The Rolex began with a healthy field of 50 cars, a strong rebound after an event-low 38 entries last season. Daytona officials said infield attendance would be limited for the event but did not release a capacity number. Campers were permitted only in motorhomes with tents banned and masks required on property.

Alegra Motorsports announced right before the race began that driver Michael de Quesada tested positive for COVID-19 and had left the speedway to self isolate. He was replaced in the Mercedes competing in the GT Daytona class by Mike Skeen.

Otherwise, the event went on as scheduled. The midway bustled with fans visiting manufacturer displays, the Ferris wheel was up and running and many of the best road course racers in the world were eager for the twice-round-the-clock endurance event.

Johnson held his own in his first stint driving the Cadillac, and the Action Express entry, fielded in part with Hendrick Motorsports and sponsored by Ally, has a solid chance at the overall win. His team will have to contend with the full-time Action Express entry, which brought in reigning NASCAR champion Chase Elliott for his sports car debut.

Hendrick sent a handful of its employees to Daytona, including former Johnson crew chief Chad Knaus and Jeff Gordon, who was part of the Rolex winning team in 2017 for Wayne Taylor Racing. Johnson climbed atop the pit stand after his drive to chat with both Elliott and Gordon.

Wayne Taylor Racing returned to Daytona as winner of the past two Rolex 24s, as well as three of the past four dating to Gordon’s win. But the team switched from Cadillac to Acura during the offseason and is still adjusting to the move. The transition has been eased by drivers Ricky Taylor, Helio Castroneves and Alexander Rossi, who all piloted the Acura the past three years for Team Penske.

But the Cadillacs — there are four in the seven-car DPi class — have so far been leaders of the pack. The Action Express entry with Elliott in the lineup started from the pole after winning last weekend’s qualifying race, and Chip Ganassi Racing has not shown any signs of rust after a year out of the series.

The Ganassi entry was the overall race leader a little over two hours into the race behind starter Renger van der Zande, who along with Kobayashi won two straight with WTR. Both are seeking to become the first driver to win three consecutive Rolex watches.

Ganassi, who has eight Rolex victories, is also using reigning IndyCar champion Scott Dixon and Kevin Magnussen, who moved to sports cars after seven seasons in Formula One.

As Dixon awaited his turn in the car, he marveled at the job Johnson has done over the past two months. Dixon and Johnson will be Ganassi teammates in IndyCar.

“I think a lot of people, what they see, especially on our team, is just his work ethic and he grinds out everything,” Dixon said. “He’s just trying to get up to speed as quick as possible. This probably has to be the biggest task for anybody that has ever tried going from polar opposite ends of motorsport.”

“It’s been fun really challenging myself behind the wheel in an entirely new way,” Johnson said. “These high-downforce cars, it’s just a lot of fun, number one, and just a massive challenge to rewire all the things I’ve learned from driving the heavy sedans.”

Could a vaccine get rid of malaria for good?