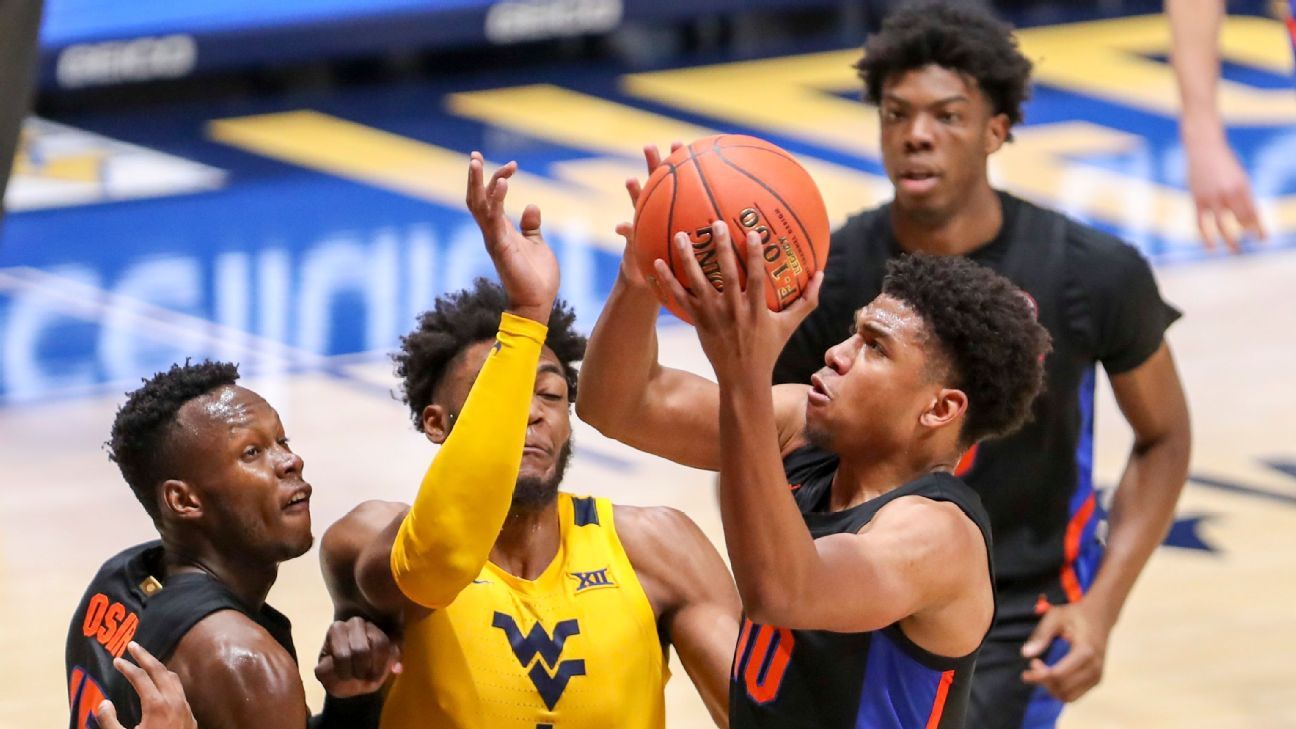 
After Keyontae Johnson collapsed face-first and was subsequently hospitalized for several days in critical condition, basketball became an afterthought for Florida’s men’s basketball team. Johnson was the Gators’ leader, a first-team All-SEC selection last season who was named the preseason SEC Player of the Year before this season.

If Florida struggled on the court the rest of the season, it would have been understandable. And at first, the Gators did. They beat Vanderbilt and LSU, but were then blown out by Alabama, a mediocre Kentucky team and lost at Mississippi State in a span of four games.

Their season has completely turned around since the loss to Mississippi State, however. Mike White’s team won its fourth game in a row on Saturday, going to West Virginia and beating the No. 11 Mountaineers 85-80.

Suddenly, Florida is knocking on the door of the top 25 and can make a strong case as the league’s second-best team behind Alabama.

“We’re very, very excited about it,” White said in his postgame news conference. “It’s good to know that hopefully your guys will gain a little bit of confidence. We’ve done it at home, now we’ve done it on the road. Hopefully that level of confidence will help to have our guys embrace the work even more. Post-Keyontae, this team can be still be a very good team.”

It’s that last sentiment that had been debated before the past couple weeks. After all, Florida was an inconsistent team last season — even with Johnson, Kerry Blackshear Jr. (who graduated) and Andrew Nembhard (who transferred to Gonzaga). The blowout losses to Alabama and Kentucky, the latter coming in Gainesville, raised questions. Following the loss at Mississippi State, the Gators sat at 6-4 overall and 3-3 in the league, with a game against red-hot Tennessee up next. And it got worse: Scottie Lewis had missed the two previous games due to COVID-19 protocols and was out again, while Michigan transfer Colin Castleton was going to miss the Volunteers game with an ankle injury.

Florida then went out and drubbed the Volunteers by 26. And the Gators have been a completely different team since that win.

“People forget that these guys — we came back from Tallahassee and we were done. Completely done,” White said. “Guys went home and didn’t do anything. Some of them did, I’m sure, some of those guys were in the gym. But we didn’t get together collectively for 15 days. And it wasn’t a pause where we’re still doing 5-on-0, Dry 0, watching film with guys … some guys went home for 14, 15 days.

“We needed to mentally heal from the trauma that these guys experienced. We needed these guys to get away from it. We came back on the 26th, and we’re obviously a different team without the conference preseason player of the year, the best player I’ve ever coached, a guy who I thought was going to end up having an All-American-type season.”

It took White some time to find the right mix of personnel. Sophomore point guard Tre Mann, a former McDonald’s All American who struggled last season, has emerged as a focal point of the offense. Tyree Appleby, a Louisiana Tech transfer who sat out last season, has started the past seven games and provided a boost at both ends of the floor and allowed the team to speed up the tempo. Noah Locke has rediscovered his outside shot. Lewis has returned to health and been an X factor, averaging 10.9 points per game, while White inserted Omar Payne into the starting lineup down low for the past four games.

Florida’s Scottie Lewis spins to the paint and gets an acrobatic bucket to drop.

“These guys [are] playing together more without Keyontae. These guys [are] understanding we’ve revamped everything we’re doing offensively, so that’s taken time, and also, getting back in shape. Getting back to taking game shots and getting into a stance,” White said. “I think when we first came back, we were playing for Keyontae, we were playing on emotion as much as anything, came back down to earth a little bit, gotten to work. … We’re obviously better than we were a couple weeks ago.”

But the biggest development has been Castleton establishing himself as one of the biggest impact transfers in the country. He averaged 2.3 points in two seasons at Michigan, then averaged 6.5 points in the first four games this season. Over the past nine games, Castleton is averaging 16.4 points, 6.0 rebounds and 2.8 blocks. Against West Virginia, he finished with 21 points, 7 rebounds and 5 blocks, helping the Gators hold their own on the glass against Derek Culver and the Mountaineers.

“We were just being soft in the first half, didn’t play hard enough,” Castleton said after Saturday’s game. “[Culver] got a bunch of easy buckets that he wasn’t supposed to, so kind of just honed in on that in the second half. Didn’t give him as many easy looks as we did in the first half. Got a bunch of layups and just really locked in on that. Basically, being soft.”

Florida answered some questions on Saturday. West Virginia is annually one of the toughest teams in the country, and unlike most opponents in the way it crashes the glass and plays physically for 40 minutes. The Gators have struggled on the defensive glass and can have issues against teams that attack the paint consistently. But despite the Mountaineers’ 16 offensive rebounds, Florida — primarily Castleton — went toe-to-toe with them in the paint and then made big plays at both ends late in the game.

What does it mean moving forward? Florida should have been ranked in the AP top 25 last week and will likely be in the rankings this week, but the Gators now have a strong case to be considered the best team in the league behind Alabama. They’ve already beaten Tennessee and LSU in the league, although they will face those teams on the road in the next couple weeks.

But regardless of what happens in Knoxville and Baton Rouge, White and Florida have righted the ship in the past two weeks — culminating in Saturday’s win in Morgantown.

“This is really huge, really huge,” Locke said. “I think this is my first one on the road since I’ve been here. I mean, it definitely feels great. We just have to keep the momentum going.”

UFC Real or Not — Israel Adesanya has cleared out middleweight; Leon Edwards…