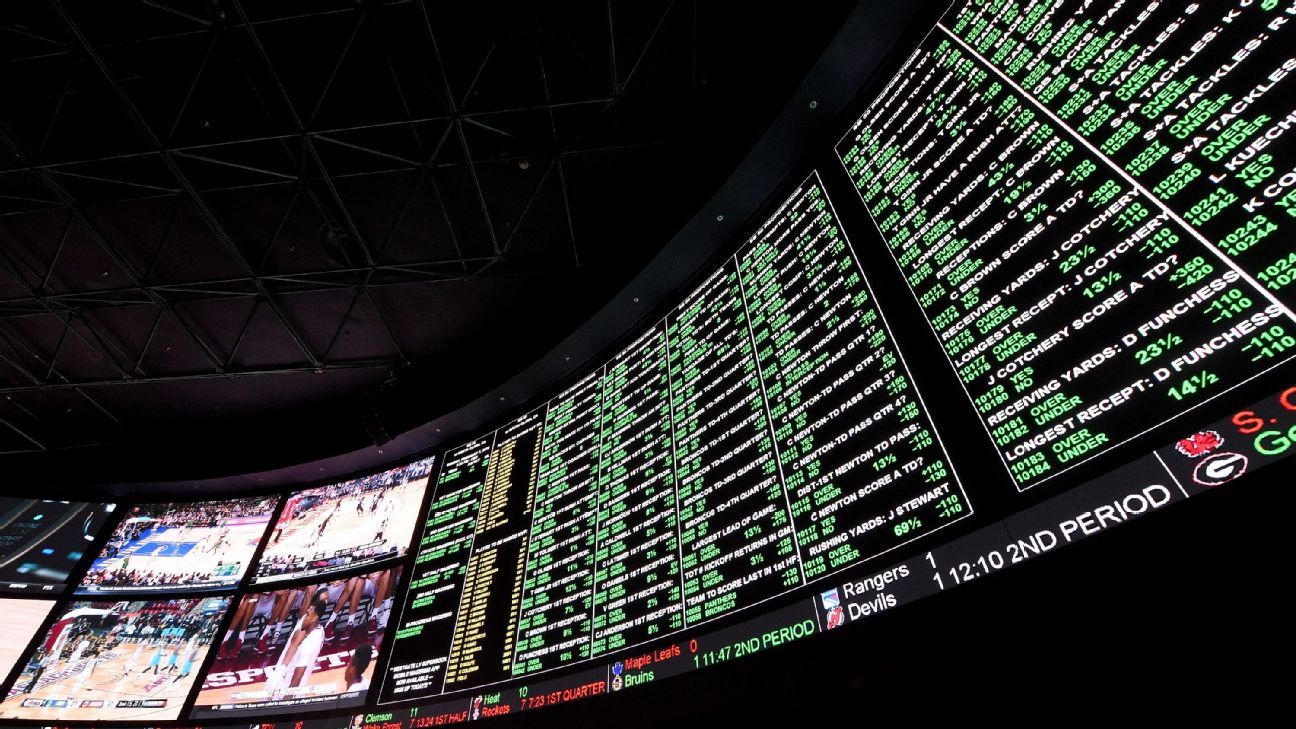 
The Super Bowl, America’s favorite game to bet, is here.

Over the next two weeks, hundreds of millions of dollars — potentially a billion — will be bet on the Super Bowl with U.S. sportsbooks, which are now taking action in 20 states and the District of Columbia. During championship weekend, 30 million sports betting transactions were tracked in the jurisdictions with online wagering, according to leading geolocation compliance firm GeoComply and Conscious Gaming, an organization dedicated to improving responsible gaming practices. In Michigan and Virginia, the latest two states to launch online sports betting markets, 400,000 sportsbook accounts were active over championship weekend.

Even more will be in play over the next two weeks, when Americans bet on everything from the coin flip to the color of Gatorade dumped on the winning coach to the MVP’s postgame acceptance speech. Money will be on the line for all of it.

From the biggest bets to the wackiest wagers, ESPN Chalk will update it right here in our Super Bowl betting notebook.

• $2.3 million: A bettor with BetMGM in Nevada placed a $2.3 million bet on the Buccaneers +3.5 (-115) on Thursday night. The bet would pay net $2 million, if Tampa Bay covers the spread. It’s the biggest bet on the Super Bowl reported yet and helped offset a lot of early action on the favored Chiefs, Jason Scott, vice president of trading for MGM, said.

“This was a bet we were very happy to receive,” Scott said. “We had previously written several other six-figure bets, all on Kansas City, and the public is certainly behind Andy Reid and Patrick Mahomes.”

• There was a slight difference of opinion on the opening line at sportsbooks. The consensus opening number was Kansas City -3, but several sportsbooks, including the SuperBook at Westgate Las Vegas, went a little higher, opening at Chiefs -3.5.

“Three weeks in a row now, where we opened up one of these Buccaneers games, the sharp guys just flooded us with Buccaneers bets,” said John Murray, executive director of the SuperBook.

By the Monday after the matchup was set, the line had settled at Kansas City -3, with added vig to bet the favored Chiefs.

• In the first 24 hours at DraftKings, 77% of the point-spread bets and 78% of the money bet on the point spread was on the Chiefs.

• Forty-one games had closing lines of -3 this season, including the playoffs. Teams favored by three went 25-16 straight-up and 20-21 against the spread this season.

• Seven Super Bowls have had a closing point spread of -3. The favorites in those games are 4-3 straight-up and against the spread.

• Five Super Bowls have been decided by exactly three points.

• “I can’t imagine it going to 2.5,” Murray of the SuperBook said. “I could be wrong about that, but seems crazy to me. Kansas City was considered the best team in the league the whole way. I can’t believe it would go under 3. To go to back to 3.5, it would just take bets from the right people, the most respected people. And they could move it right back up, if certain groups that we really respect came in and laid 3, we would say, ‘OK, let’s go back to 3.5, because that’s what we thought it should be to begin with.'”

• Nevada Gaming Control began tracing the betting on the Super Bowl in 1991. Since then, the state’s sportsbooks have suffered a net loss on the Super Bowl only twice: 1995 Chargers-49ers and 2008 Giants-Patriots.

• It’s known as the bookmaker’s dream: The favorite wins the game, eliminating all the money-line bets on the underdog, but doesn’t cover the spread for the betting public, which almost always gravitates to the chalk. It has happened five times in Super Bowls, most recently in 2009 when the favored Pittsburgh Steelers (-7) defeated the Arizona Cardinals 27-23.

Bookmakers expect to be rooting for it again this. “That’s always the Super Bowl dream,” Murray of the SuperBook said.

• Johnny Avello, sportsbook director for DraftKings, said his shop was facing a $1 million liability on the Buccaneers in his odds to win the Super Bowl.

• The largest bets on the Super Bowl are normally in the million-dollar range and are typically placed by casino VIPs, not professional sports bettors. Bookmakers do not make a habit of taking their largest bets from their sharpest customers.

• The tradition of dumping Gatorade on the Super Bowl-winning coach dates back 35 years, and people love to bet on it. Orange has been the most common color, used 33% of the time since Super Bowl XL, including with the Chiefs last year.

• There have been 26 overs, 26 unders and one push in the Super Bowl (no over/under on Super Bowl I).

• The coin flip has landed on tails 29 times and heads 25 times.