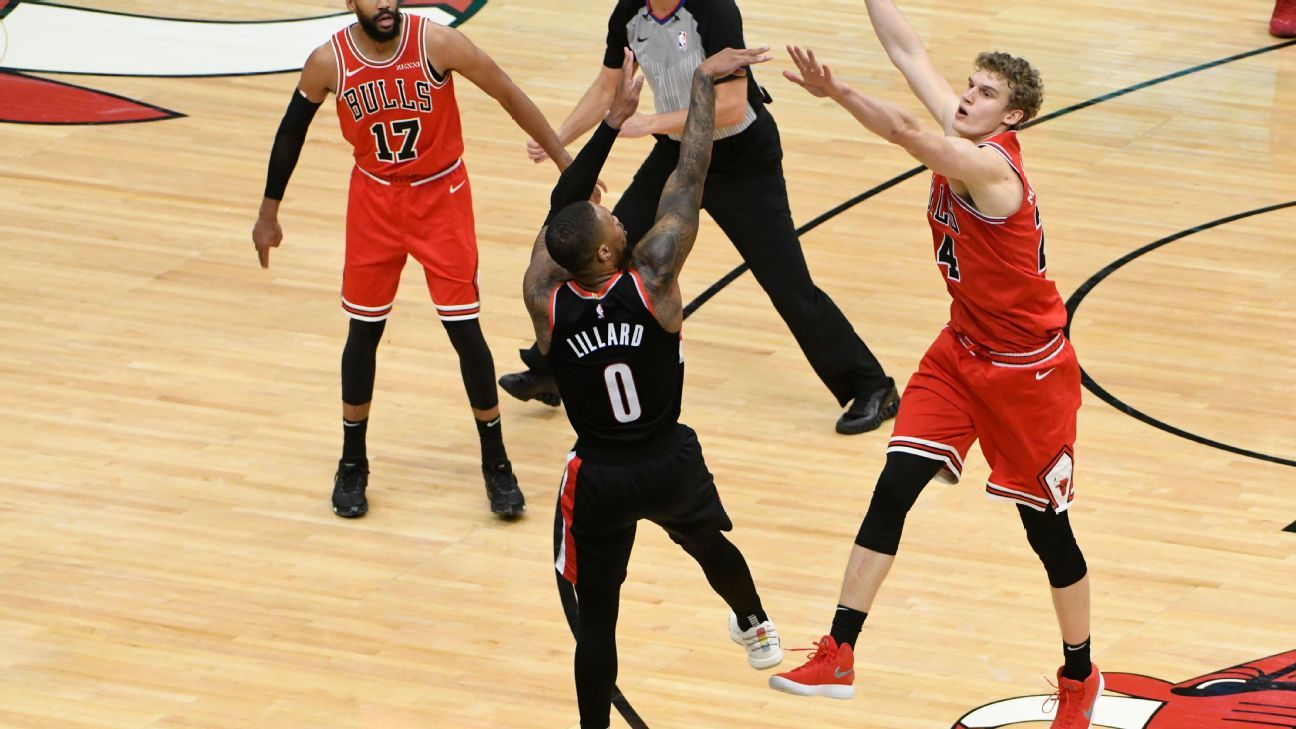 Down five points to the Chicago Bulls on Saturday night with 8.9 seconds left, the Portland Trail Blazers entered what NBA fans have come to know simply as “Dame Time.”

Damian Lillard hit a 37-foot 3-point shot with less than 10 seconds left to put the Blazers within two points. The Blazers then tied up Bulls star Zach LaVine and won the jump ball — which eventually ended up in Lillard’s hands.

Lillard proceeded to drill a buzzer-beating, step-back 3 over the long arms of Lauri Markkanen to beat Chicago 123-122.

“This one is special because in these situations where we’re down five, I think, with 11 seconds left, those are the moments where the winning team thinks they’ve got the game pretty much wrapped up,” said Lillard, who scored 14 points in the fourth. “And the opposing team is discouraged.”

Lillard finished with a game-high 44 points, 9 assists and 5 rebounds and hit his third career game-winning buzzer-beater, including the playoffs. That is the most in Trail Blazers history, according to ESPN Stats & Information research.

For Lillard, it was also his 35th career 40-point game, more than double of any other player in franchise history. Clyde Drexler has the next-most with 17.

Lillard’s teammates Enes Kanter and Gary Trent Jr. weren’t surprised by his late-game heroics. Inside the fanless United Center in Chicago, Kanter was among the first of his teammates to greet him with a hug. Kanter said he’s “used to that shot” but also recognizes that it’s “unbelievable what he can do.”

So, too, does Trent.

“The first time, I was shocked when I got here at first as a rookie, seeing it from day one, whether it was ending practice, ending games,” Trent added. “But now at this point, it’s what he does. Nobody is surprised in a sense. He makes big-time shots. He’s done this time after time after time, so at this point, I knew it was going in when he shot it.”

Chicago trailed by as many as 19 points on the night before, clawing back to make it a close game in the second half. Markkanen ended with a team-high 31 points with six rebounds, and LaVine contributed 26 points with 7 rebounds and 4 assists.

After nailing the shot Saturday, Lillard credited his relatives for planting those roots within him of pushing through adversity in critical moments.

“It started in my own family. That’s the crazy thing, and I think that’s why I always reference my upbringing and the kind of family that I come from because of just the challenge and how competitive it is in my own family,” Lillard said. “It can be something like a spelling bee. It can be anything. We compete to the death and it don’t matter. You’re held to a certain standard in my family where it’s just like you’re going to be built for the low moments, you’re going to be built to handle the high moments properly.

Ikea bought 11,000 acres of forest in Georgia to protect it from development