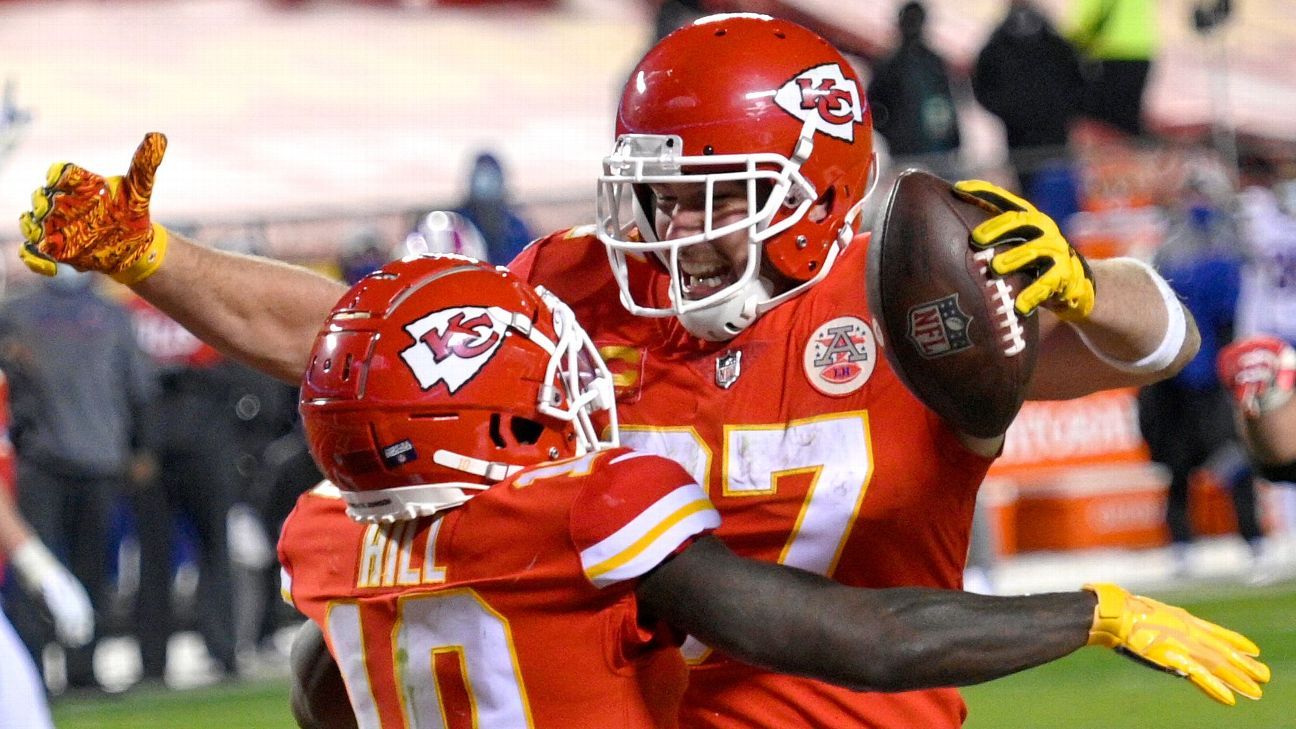 
KANSAS CITY, Mo. — At one point late in the regular season, Travis Kelce and Tyreek Hill were competing not only for the Kansas City Chiefs’ lead in receiving yards, but for the NFL receiving title as well.

Their competition remained friendly, as always, because each benefits from having the other around.

“[Hill is] the deadliest threat in the National Football League,” said Kelce, who wound up with 1,416 yards, an NFL record for a tight end and 140 more than Hill. “You can’t put a cap on his speed. He’s the biggest big-play threat in the game. That’s where it makes my job so much easier because he just draws so much attention.”

In the end, Kelce finished second in the NFL overall in receiving yards and Hill eighth (1,276 yards) — and neither played in the Chiefs’ regular-season finale against the Chargers. They will be the second tight end-wide receiver combo with 1,200 receiving yards each to play in a Super Bowl. But as good as Kelce and Hill were in the regular season — their big games included one against the same Tampa Bay Buccaneers they will face in the Super Bowl Sunday (6:30 p.m. ET, CBS) — they’ve been even better in the two playoff victories.

They are the first teammates in NFL history to each record 100 receiving yards in consecutive playoff games in a single postseason. They have accounted for 79% of the Chiefs’ receiving yards (second highest for a Super Bowl tandem), 68% of the receptions (second) and 63% of the targets (first).

“They’re playing really good football right now,” quarterback Patrick Mahomes said of Kelce and Hill. “That’s the biggest thing. I’m just taking what’s there, trying to get the ball to guys in space. I’m never someone that chooses who I’m throwing to. I just throw it to whoever’s open. Those guys have been getting open and I’ve been able to get them the ball. I’m sure the Bucs have seen that as well, so I’m sure they’ll have a game plan to slow those guys down. We’ll have to adjust to that.”

Hill said he has learned from the way Kelce meticulously runs his routes. Assistant coach Greg Lewis will often show video to Hill and the other wide receivers of Kelce as a teaching tool.

“Kelce, for him to be his size [260 pounds] and he’s very nimble and very light on his feet for a guy of his stature,” Hill said. “When I first got here, I was like, ‘Man, this big guy can run routes, are you serious?’ But the dude is crazy good. Kelce is crazy good.

“We don’t too much get into stats. I feel like we try to pride ourselves on winning the game. Now, granted, now we want to make the big play — I’m not going to say that. But as far as looking at stats, we just want to win the game and just be the best and just help each other out.”

Kelce and Hill — especially — were key in the Chiefs’ 27-24 win over the Bucs in Week 12. Kelce had eight catches for 82 yards. Hill had 13 catches for 269 yards, including touchdowns of 75, 44 and 20 yards. He had two touchdowns when he hit 20 miles an hour in the first quarter against the Bucs, according to NFL Next Gen Stats data. He had 203 receiving yards in the opening quarter.

But Hill had 66 yards in the final three quarters and Kelce five yards in the second half after Tampa Bay made adjustments in their coverage.

“As you saw the last time, the Bucs worked double-teams against us on those two, and we’ve got to work on that and make sure we’ve got those things covered there,” Chiefs coach Andy Reid said.

Hill gained 211 yards when Bucs cornerback Carlton Davis was the nearest defender, the most allowed by any defender in the past five seasons, according to the NFL Next Gen Stats.

But as for why Hill seemed to slow down after his torrent first quarter against the Bucs in Week 12?

“I just got tired,” Hill said jokingly. “I got tired of running. No, let me stop. Todd Bowles is a great defensive coordinator. He’s been doing it for a long time. I’m sure he’s seen guys like me throughout his career. Just being able to dial up Cover 2, Cover 55 strong and things like that to slow me down.

“Also, putting Carlton [Davis] on me, slowing me down and bringing the safety over the top a bit to double me and Kelce. That kind of slowed us down a lot, plus their front seven is tremendous. Once they get clicking on defense, they’re a great defense. They fly around the field — they’re great. I feel like I just got lucky and was able to get open.”

Elon Musk: Bitcoin is on the verge of broad acceptance

Chris Young was freed with the help of Kevin Sharp, the judge who sentenced him. Now he’s fighting for prison reform