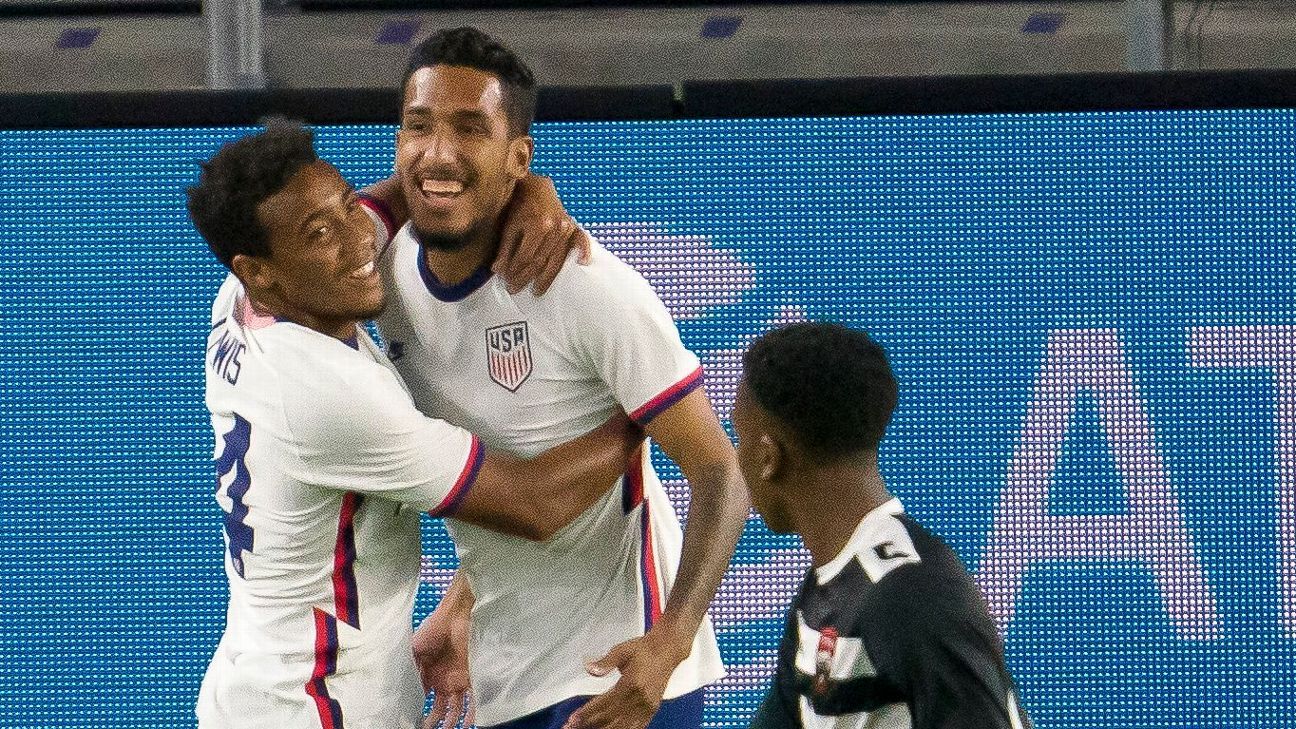 
Jesus Ferreira is one of those players who seems to be perpetually in search of a position.

His attacking talent, in terms of his touch and finishing ability, is undeniable. Yet last year with FC Dallas, he spent time playing in just about every attacking role you could think of — center-forward, winger in a front three, attacking midfield — and he couldn’t make any one of them his own.

On Sunday, United States men’s national soccer team coach Gregg Berhalter might have revealed Ferreira’s most effective role, that of a false nine. The Dallas forward certainly had a night to remember against Trinidad & Tobago. Yes, the Soca Warriors were massively short-handed and hadn’t played an official match in over a year; it showed as the U.S. was three goals in front inside of 23 minutes. But Ferreira took advantage with two goals and three assists in what ended up being a 7-0 win.

More importantly, Ferreira’s movement — whether it was dropping deep to receive the ball or making runs in behind the defense — added another dimension to the U.S. attack. He was clearly in sync with wide players Paul Arriola and Jonathan Lewis, who added two goals apiece.

“When you have wingers that can threaten the back line, you can afford to drop a striker and still get that verticality and still be able to stretch the opponent,” Berhalter said. “We saw that tonight again. We’re really pleased with [Ferreira’s] performance. What we talked to him about today was arriving in the penalty box, and he certainly did that. To me, it was a complete performance and he deserved the man of the match.”

Granted, it wasn’t the first time Ferreira had played in that role. Berhalter used him in similar fashion, and to good effect, a year ago in a 1-0 friendly win against Costa Rica. But not much went right for Ferreira during the rest of 2020. With designated player Franco Jara and Ricardo Pepi hogging the minutes, and with a bout of COVID-19 sidelining him for a spell, Ferreira simply looked lost at times. In 979 minutes with Dallas, he managed just a goal and one assist last year. He blew that away in 63 minutes of work on Sunday.

“Obviously, 2020 was a tough year for me only scoring one goal in the league,” Ferreira said. “I was kind of upset, but I didn’t take that as a slowing-down year. I took it as, ‘You have to do better.’

“We have to make sure that 2021 is a way better year than the past two years. And so just today was a right step forward.”

Maintaining the faith of a national team manager can be an important component in riding out a difficult stretch. All players look for ways to manufacture confidence, and the right message in the right moment can help a performer create some self-belief when it otherwise might be missing. Ferreira said that was the case with Berhalter.

“Me and Gregg, we had a lot of conversations to what was going on and stuff,” Ferreira said. “It makes me happy that he’s stuck by me, and now I can show him what I can do best.”

Replicating that form at club level doesn’t figure to get much easier in 2021. Jara and Pepi are still there to contend with. Different teams beget different personnel with different tactics. But Olympic qualifying also beckons, and U.S. under-23 coach Jason Kreis has long been an admirer of Ferreira. A successful qualification effort could provide yet another boost for Ferreira and lead to a more settled place in his career.

Sunday’s outing saw more of the style Berhalter has tried to impart take shape. Outside backs Aaron Herrera and in particular Sam Vines contributed consistently to the attack. And with Jackson Yueill pinging diagonal passes to the wings, and with the U.S. making continual use of overlapping runs, there was space to be had out wide.

Such was the gulf between the two sides that it was tough to pick out winners and losers, but some players clearly benefited more than most. One of those was Vines, especially since his left-back position is one that seems perpetually thin, and he is another player for whom Olympic qualifying could benefit.

Arriola continues to make progress in his comeback from an ACL injury that sidelined him for most of 2020. Lewis showed the kind of damage he can do in a starting role. Goalkeeper Matt Turner barely touched the ball, but he did save a penalty from Alvin Jones — a nemesis from the night back in 2017 when T&T knocked the U.S. out of World Cup qualifying — to preserve the clean sheet.

The 2021 campaign will be action-packed, with the Nations League finals, the Olympics, Gold Cup and World Cup qualifying on the schedule. Those will prove to be much sterner tests than what the U.S. saw Sunday night, but the year is off to precisely the kind of start Berhalter wanted.