UFC debate — Conor McGregor? Michael Chandler? This is who Dustin Poirier should fight next 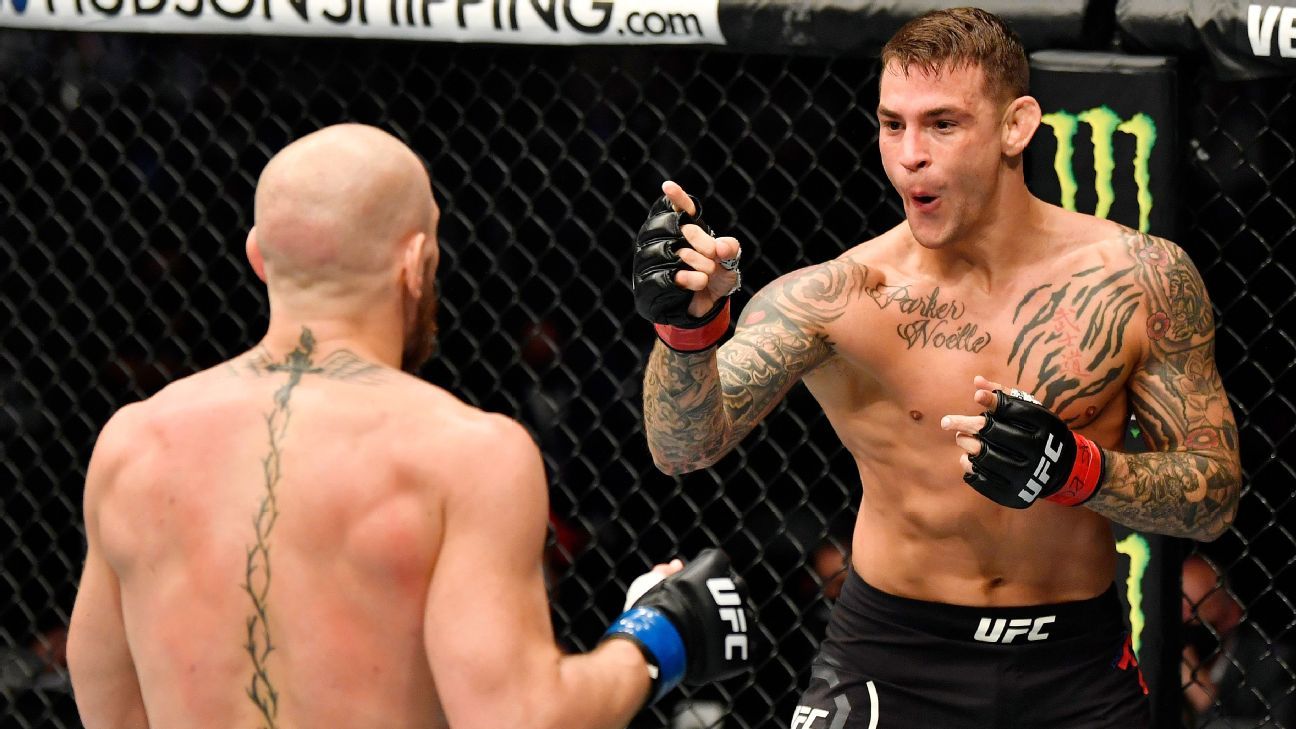 The biggest uncertainty is at the top: Who really is the champion? Dustin Poirier believes he’s the legitimate champ after beating Conor McGregor at UFC 257, because Khabib Nurmagomedov is actually retired. But for now, the UFC rankings still list Nurmagomedov as the title holder.

Then comes the question of who should Poirier fight next. Assuming a title is on the line, should he go for the top challenger, who would be Charles Oliveira, or possibly Michael Chandler? Or should the veteran of 10 years try to cash in and take a trilogy bout against McGregor, regardless of whether a title is at stake?

ESPN’s Brett Okamoto and Marc Raimondi agree that Poirier is the lynchpin to all of the scenarios, but they disagree with how the UFC should proceed.

Okamoto: Assuming Khabib Nurmagomedov vacates the 155-pound title in the near future, which we both believe he will, this marquee division is up for grabs.

Obviously, you’ve got Dustin Poirier knocking out Conor McGregor on Jan. 23. You’ve also got Michael Chandler coming over from Bellator and making an instant splash by stopping Dan Hooker on the same card. You’ve got Charles Oliveira and his eight-fight win streak. Justin Gaethje, who is still highly ranked. Nate Diaz is a wild card. Great options. I think it kind of starts with Poirier, though, right? He’s the first domino to fall. So let me ask you: Who should Poirier fight next?

Raimondi: That really is the $1 million question, isn’t it, Brett? And the reason why I use that terminology is because, for me, the answer is simple. Poirier should take the fight that earns him the most money. That is likely the trilogy with Conor McGregor.

I know what hardcore fans are going to say. I get it. And I also know Poirier wants to be the champion more than anything. But he also has to think of his family.

How many people have ever gotten the payday McGregor opponents receive? And then, how many have gotten it twice? Only Nate Diaz has, and he made so much money that he has only fought two times in the past five years and is doing absolutely fine. If Poirier beats McGregor again, the title fight will be there for him. So will millions of dollars.

Okamoto: You disappoint me, Marc. I thought I was conversing with a fellow MMA purist. You know if Poirier fights McGregor again, there will likely be a UFC championship attached to it, and we both know, as amazing as McGregor’s career has been and as popular as he is, he shouldn’t be fighting for a UFC title in his next bout. I don’t even have him ranked inside the top 10 at lightweight right now. He hasn’t won a 155-pound fight since 2016.

But … I see your point. And I don’t entirely disagree. Poirier said it himself, he’s interested in another fight with McGregor, or one with Nate Diaz. Those are money fights — which Poirier deserves. He has been fighting in the UFC — and WEC before that — for over 10 years. Cash in.

But I think there’s a way for him to cash in and still do what’s right by the division. Before I propose that, though, how likely do you think it is the UFC books Poirier vs. McGregor 3 right away, and how do you justify making it for a title?

Raimondi: I really can’t justify that being for the title, if I’m being honest. The UFC really painted itself into a corner by not making the UFC 257 main event between Poirier and McGregor for the title. That would have solved all the problems that we’re trying to hash out now.

In an ideal world, Poirier vs. McGregor 3 would not be for the title. But you’re 100% right. If that’s next, I could very well see the UFC putting the belt on the line. I guess the argument would be that McGregor already has a win over Poirier and this one is for all the marbles? I wouldn’t really buy that since McGregor beat Poirier almost seven years ago.

What I would like to see is Poirier chase the McGregor trilogy first and let the Oliveiras, Chandlers and Gaethjes of the world sort out the division. Then, Poirier can go after the gold if he beats McGregor. I really believe that the opportunity to beat the biggest star in the history of the UFC twice is too significant to pass up.

The title is great, but plenty of people have won that. Beating McGregor twice, if he can do it? Poirier would go down as a legendary name in combat sports. If Poirier goes out and fights Oliveira next — with all due respect to the excellent Brazilian fighter — it would draw a fraction of the audience, attention and money involved.

Okamoto: OK, so I’m glad you said all that, because it sets up my solution perfectly. And I don’t even know if we’re really “debating” right now, Marc, but my competitive spirit is kicking in and I’m about to drop the mic on you, my friend. You ready?

Here’s what should happen. The UFC should crown Poirier the champion. Now, I know the promotion doesn’t like doing this, historically. They want the belt to be won in a fight, in an event they can promote. But here’s what you do. You jump on the Poirier train right now. You capitalize on Nurmagomedov’s decision to retire — which will still be big news, once it becomes “officially” official — and you come out and say, “Dustin is the guy. This is the best 155-pounder in the world. He beat Max Holloway twice. He knocked out Justin Gaethje. He beat former champions Anthony Pettis and Eddie Alvarez. And he just knocked out the great Conor McGregor! We had to put a belt around this man’s waist! He’s the man!”

And by doing that, you do a couple of things. You put Poirier on a champion’s contract, meaning he makes more in his next fight. You throw marketing weight behind him, and incentivize him to legitimize the belt, which is the best thing for the sport. And then you book McGregor vs. Diaz 3, knowing that fight sells, and you can turn around and sell the winner — regardless of who it is — as a future title contender for Poirier. Boom! Marc, tell me how good that is.

Raimondi: I don’t disagree with what you just said in principle. Poirier should be the champion right now. However, the UFC doesn’t just hand out titles like that. If that were to happen in this case, I’m all for that.

And the idea of setting up McGregor vs. Diaz 3 with the winner potentially fighting Poirier down the line sounds like a great idea. However, what happens if Poirier goes out and loses to Oliveira or Chandler? Obviously, Gaethje would have a chance to beat Poirier if they had a rematch. Is it worth the gamble for Poirier to forego the chance to face McGregor in a career-defining trilogy bout?

Poirier is a sportsman, and I think he’d like his odds in any of those cases. But it is quite the risk. What if McGregor lost that third fight with Diaz and stepped away from MMA? The big-money trilogy would be gone forever. I believe in striking while the iron is hot. This is prizefighting, and more than the title — for better or worse — the prize is money. And that means McGregor is the fight to make immediately if you’re Poirier.

The good news is that Poirier has put himself in the driver’s seat. He has plenty of options, most of them very good. One question for you while we’re here, Brett: If Poirier is granted the title now, who is his first challenger?

Okamoto: All true points. Under my scenario, it really is up to the UFC to make it worth Poirier’s while to forego the immediate trilogy fight with McGregor.

To answer your question, personally I would go with Michael Chandler. You talk about striking while the iron is hot, Chandler is the hot hand when it comes to a title challenger right now. He was perfect in that fight against Dan Hooker, and his postfight speech was on point as he called out McGregor and Nurmagomedov.

If the UFC were to go with Oliveira instead, nothing wrong with that. He’s deserving, clearly. But I think in Chandler, you’ve got a former champion from another promotion who came in and proved himself in his debut. So I would do Poirier vs. Chandler, and make it Poirier’s first title defense.

Thanks for the support everyone! Was not my night/morning in there but a great contest to improve on. I’m excited at the blockbuster trilogy I now have on my hands. Dustin is a hell of a competitor and I look forward to going again. God bless us all, happy Sunday ❤️

To wrap up the Poirier-McGregor topic — the UFC can go a long way into checking all the boxes here, if they just really throw their weight behind Poirier. Recognize him as the champion. Put him on a champion’s contract. Promote him as the baddest man at 155 pounds. You’re still right, all of that won’t get him quite the same money an immediate trilogy bout with McGregor would, but there’s value in Poirier getting the credit he deserves as an undisputed UFC champion for the first time.

And if McGregor does beat Diaz in a fight we both know would sell well over 1 million pay-per-views, and then says he’s obsessed with making the Poirier situation right … well, Poirier just cashed out even more than he would have if he booked this fight right now.

Raimondi: I wouldn’t be against any of those scenarios. I’d lean more toward Oliveira being next up, just because of that incredible performance over Tony Ferguson. I mean, I’ve never seen anyone handle Ferguson the way Oliveira did. There’s a case to be made that Oliveira is the best lightweight in the world right now after eight straight wins. With that being said, Chandler would be a great challenger for Poirier, and if sold right, I think that could be a really big fight.

Let’s clash for this crown. Winner takes all, and becomes the King of Lightweight division https://t.co/fGJd6OlvIX

Both of those, though, would pale in comparison to a trilogy fight with McGregor. Sure, that could still happen down the line if Poirier is the reigning champion, but that’s putting a lot of faith in happenstance. This is a crazy world. We’re still in a global pandemic. And if another crack at that McGregor payday is out there for Poirier, I don’t think anyone should begrudge him for taking it. It wouldn’t just be about the money, either. Even if Poirier became the champion — as he should be right now — that still doesn’t hold the same cachet as the potential of two wins over McGregor. If Poirier effectively ended McGregor’s run as an elite fighter with his fists in two straight wins, he’d be remembered forever.