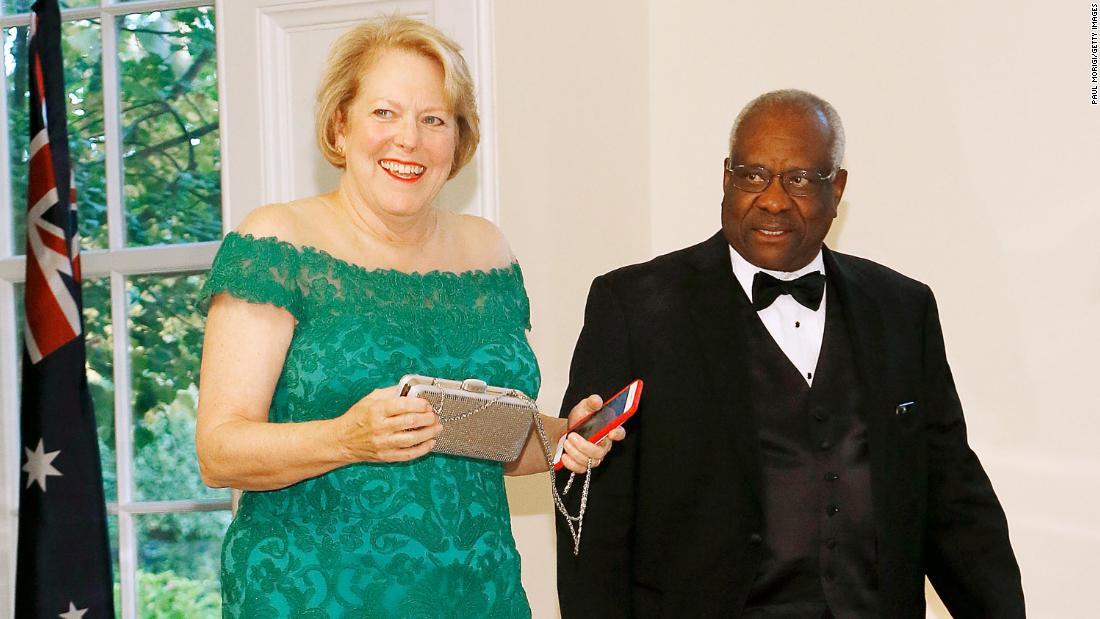 “I owe you all an apology. I have likely imposed on you my lifetime passions,” Thomas wrote in mid-January to an email list comprised of former clerks and their spouses and partners.

“My passions and beliefs are likely shared with the bulk of you, but certainly not all. And sometimes the smallest matters can divide loved ones for too long. Let’s pledge to not let politics divide THIS family, and learn to speak more gently and knowingly across the divide,” Thomas wrote to the former clerks.

“I would ask those of you on the contrary side to have grace and mercy on those on my side of the polarized world, and feel free to call and talk to me individually about where I failed you as a friend here,” she said. “I probably need more tutoring … Otherwise, on behalf of both of us, be assured of our love for each of you.”

The Supreme Court and Ginni Thomas did not immediately return requests for comment.

The former clerk told CNN that the email list, which also includes the spouses of the justice’s former clerks, is mostly used to discuss job changes, children or personal events such as the purchase of a new family pet.

The source familiar said that it is Thomas who serves as a kind of “den mother” to her husband’s former employees, reaching out to hear news or planning reunions.

But a Trump-related dispute — largely between three former clerks — broke out in recent days. The Post reported that a sampling of the posts made to the group were shared with the paper by a member upset with some of the pro-Trump messages written by Thomas and others before and after the November election.

Neither source could remember another time the group diverged into politics or seemed politically divided on the email chain.

“There are some liberals who are also former clerks,” the person said. “We have lots of different people as former clerks, it is not a shock that some would disagree.”

The Post reported that on the Facebook page of Thomas, a longtime conservative activist and Trump loyalist, she “celebrated” supporters of the then-president who had gathered in Washington to attend the rally in an early morning post. Later, during his rally, Trump incited the deadly Capitol insurrection, which resulted in the death of five people, including a US Capitol police officer.

In a separate Post, the newspaper said, Thomas wrote: “GOD BLESS EACH OF YOU STANDING UP or PRAYING.”

Later, after the violence occurred at the Capitol, Thomas added a comment to one of the posts, saying it was written before the violence took place, the Post said, citing reporting from Slate.

“Many of us are hurting, after leaving it all on the field, to preserve the best of this country,” she wrote. “I feel I have failed my parents who did their best and taught me to work to preserve liberties.”

Following last month’s rally, some of the justice’s former staffers sparred over email about the rally, the source confirmed to CNN. One such disagreement involved John Eastman, a former Thomas clerk who spoke at the rally and once served as one of Trump’s attorneys.

In one email, Eastman, who left his job as dean of Chapman University’s law school following the rally, wrote: “Rest assured that those of us involved in this are working diligently to ascertain the truth.”

His post garnered an “angry response” from Stephen F. Smith, a law professor at Notre Dame, who the Post said wrote back: “If by ‘truth’ you mean what actually happened, as opposed to a false narrative, then I agree.”

“I hope (and trust) that you — and everyone on this list — agree that the search for truth doesn’t in any way justify insurrection, trying to kidnap and assassinate elected officials, attacking police officers, or making common cause with racists and anti-Semites bent on wanton violence and lawlessness,” Smith wrote, according to the Post.

Eastman and Smith have not responded to CNN’s request for comment.

But the source familiar with Thomas’ emails, who had not seen her posting on Facebook, said that when reading the email chain she wasn’t sure why Thomas was apologizing because the dispute seemed to between clerks and not about anything Thomas had expressed — at least on the email chain.

Jeff Bezos to step down as Amazon chief executive

How Bezos spends his immense wealth