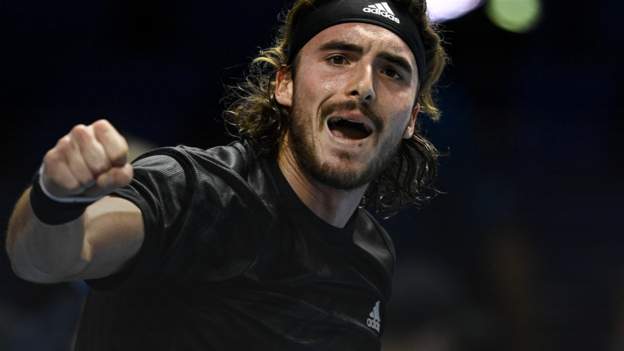 When Stefanos Tsitsipas arrived in Melbourne for the Australian Open, among his luggage was a much-loved link to the past.

It’s a simple item – a T-shirt that reads: USSR 1956 – but it helps illustrate something of the unique personality behind one of tennis’ most intriguing talents.

In 1956, Tsitsipas’ maternal grandfather Sergei Salnikov became an Olympic champion in Melbourne, playing as a striker for the Soviet Union’s football team.

Some 65 years later, the 22-year-old Greek grandson he never met is chasing his first Grand Slam victory in that same city.

Family means a lot for Tsitsipas. And so does the Australian Open – this was where he first announced his sporting potential by defeating his idol Roger Federer on his way to the 2019 semi-finals.

Since then, he has won four ATP titles, including the ATP Finals of 2019, and is currently ranked sixth in the world.

Already seen as a natural heir to the current generation’s dominant figures, he is exciting to watch, and a charismatic, refreshing presence on and off the court. But there is another, perhaps unexpected side to him.

This outwardly confident young man for a long time struggled with crippling shyness, and remains deeply affected by an extraordinary near-death experience he says continues to shape him still.

The early parts of Tstisipas’ story might feel familiar to the tennis world. He began playing at a very young age, encouraged and assisted by parents with a background in the sport. His mother Julia Apostoli was herself a professional, and she and husband Apostolos Tsitsipas worked as tennis teachers in the Athens suburbs.

“My mum was also my coach when I was younger so she taught me a lot, including discipline, generosity and kindness,” Tsitsipas tells BBC Sport.

“My dad had a big influence too. And he still has today. He’s the reason I have developed my game. His guidance and life advice helped me to mature.”

The young Tstisipas was extremely talented, loved playing and enjoyed significant early success – he was a junior world number one. At the age of 16 he began elite training at an academy on the French Riviera run by Patrick Mouratoglou, Serena Williams’ coach.

But within his story are many more unique details, one of which is truly remarkable.

In October 2016, swimming off the coast of Crete, Tsitsipas and a friend nearly drowned after being dragged out to sea by a sudden, dangerous current. Neither could understand what has happening. They both panicked and frantically tried to fight the current, exhausting themselves in the process.

In a powerful, nine-minute video blog published on his YouTube channel, Tsitsipas describes the horror of the experience that followed; how he felt totally powerless and was convinced he would die, how he made peace with death as vivid memories of his childhood flashed across his mind.

He reflects on the way the incident has matured and changed him – he had turned 18 only two months before – how it has made him “fearless”. He calls it “the day I was supposed to lose my life”.

It was Apostolos who saved both young men. He swam in after them and somehow managed to help them back to safety.

“What happened was the result of a mechanism all humans have inside, especially parents,” Apostolos says. “When this mechanism magically activates, as it did that day, miracles occur.

“An essential condition for this to happen is the unconditional faith we have in what we do and what we love. What happened confirmed the love and faith we have for one another, that the sacrifices we make are not in vain.”

In his video blog, Tsitsipas says of his dad: “If we were supposed to die and lose our lives that day, we would have to do it together. He was a hero.

“That was the day I saw life with a different perspective. I remember after that how much psychologically it changed me.”

Tsitsipas now sees himself as somebody who “understands life better, a person who takes better decisions”. Part of that process has also been influenced by events of the past year.

He says: “I was very lost at the beginning [of 2020]. I had never faced something like this pandemic, being away from competition and staying in one place. But I did see that as an opportunity to expand and try new things, which I’m super grateful for. It gave me time to reflect, to see different sides of things.

That development can be seen not just on the court but in the travel videos he publishes on YouTube, in his photography or podcasts. Tsitsipas enjoys various ways of expressing himself.

“For me it’s a way of living in the moment. It gives me a lot of freedom. I feel free, like I’m in my own world. It feels like an escape from tennis, like a hobby that could potentially lead to a second job one day,” he says.

Growing up, however, Tsitsipas was shy. He was bullied at school.

“It wasn’t easy for me to talk to people,” he recalls.

“I guess I was a good observer and a good listener. I was curious about the world. I was very curious to see what people had to say and was learning from them. I was very quiet around my family, always observing.”

That character trait was also spotted by Mouratoglou in the south of France. The renowned French coach is perhaps something of a kindred spirit. He too lived a childhood marked by shyness.

“Stefanos developed his own inner world,” says Mouratoglou, who, along with Apostolos, still coaches Tsitsipas.

“At the beginning, when he joined in 2015, he was very introverted. He used to stay inside his family environment, away from the others. When people don’t show their emotions, they create a very rich inner life.

“But he understood that I had kind of the same experiences and we talked about it. I think he’s not that shy now. He’s made a lot of progress.”

Tsitsipas adds: “There is no more shyness. I’m a person who likes to capture moments of my life, have my thoughts and my experiences shared online because that’s how it works these days.

“Tennis is a lonely sport so having hobbies and things to do except playing tennis is very important for someone’s mental well-being. My grandfather Sergei was also a producer, a screenwriter. He enjoyed doing that, I guess it comes from my Russian side and it’s in my blood.”

Despite – or perhaps because of – their close bond, there are still moments of public tension in the Tsitsipas family.

At the ATP Cup in January 2020, Tsitsipas accidentally hurt his dad as he smashed a racket at the side of the court.

A month later at an event in Dubai, he said he sometimes felt his parents were “way too involved” in his career. In response, his mother decided to attend one of his news conferences, posing him a series of questions about the importance of family to success in tennis, putting the young man in an awkward situation.

“When Stefanos was younger, it was easier,” Apostolos says. “My double role needs to be reconsidered with him growing older. I need to understand that he’s taking on more responsibilities and decisions. I need to listen to him much more.

“He has worked hard for the past two years. He’s played a lot of matches, semi-finals, finals, tough matches that brought him more experience.

“He’s taking some decisions alone, choosing details he wants to focus on and the way he’s organising his work and his team. He’s assuming his responsibilities, he knows where he wants to go and how. It brings a better energy.”

Tsitsipas says: “It works pretty well. We have good chemistry. We fight sometimes but at the end of the day we don’t separate, we are always here for each other. He is a very good person, he has a good heart.

“My family is my stability and I owe a lot to them.”

Just how far can Tsitsipas go? He and his team have high hopes for this month, for starters. In some ways it would be the perfect place for that first big win, given Melbourne’s significant Greek community.

Greece has perhaps never been considered a major tennis country, but that mentality has changed with Tsitsipas climbing the rankings. Already he is their best player in history.

“Stefanos has the potential to win various Grand Slam tournaments,” says Mouratoglou, who himself has Greek roots.

Apostolos says: “I think he’s ready to win a Grand Slam. Psychologically, also. He believes in his capacities and no-one know his limits.”

For Tsitsipas, his family and his country, it’s an opportunity to write a significant new chapter.

“I see this just as the beginning,” says Tsitsipas.

“I’m sure if I win the Grand Slam I would make my grandfather very proud. If I work hard enough and have a little bit of luck, too, then, yes.

“It would be the best moment of my career, for sure.”

Golden Globes 2021: Six things to look out for in the nominations

PSG haven’t given up on Neymar, Messi reunion in Ligue 1