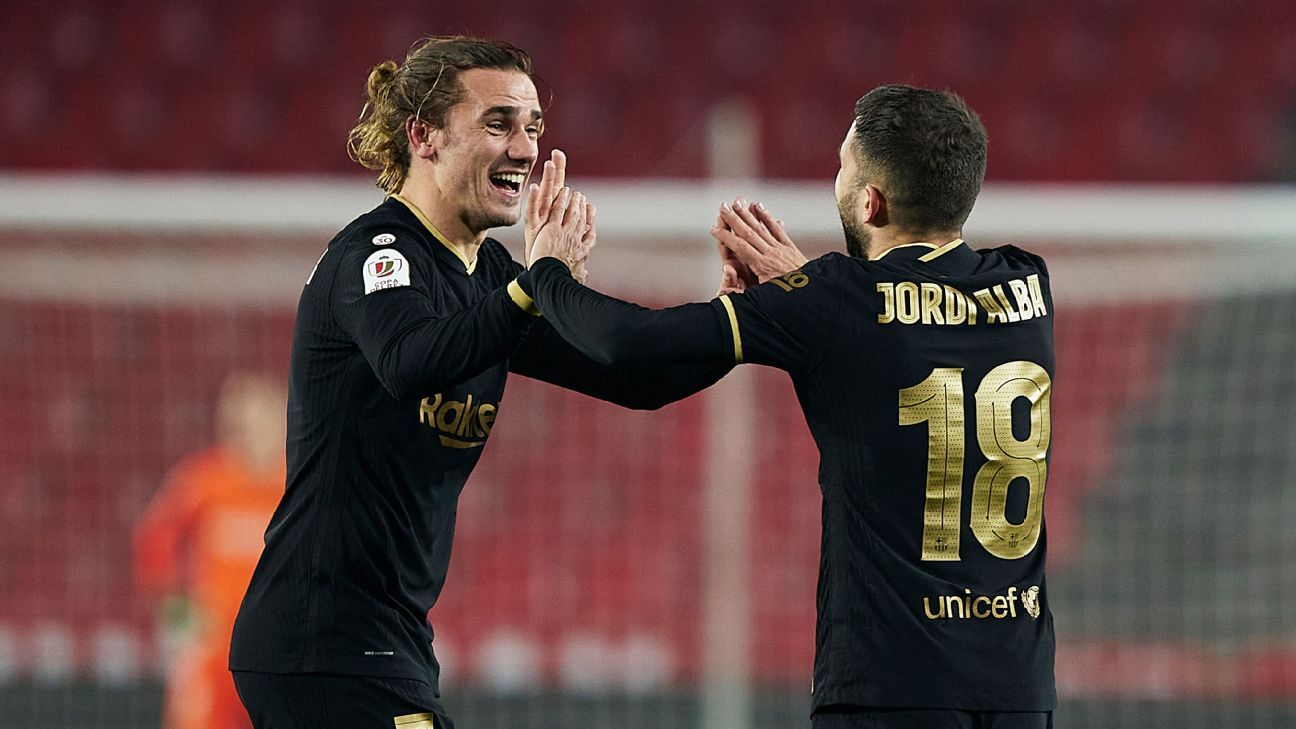 
Barcelona came from behind to beat Granada 5-3 after extra-time in a thrilling Copa del Rey quarterfinal on Wednesday at the Nuevo Estadio de Los Carmenes.

Goals from Kenedy and Roberto Soldado had the home side on track for a surprise win, but an 88th-minute own goal from Aaron Escandell and a 92nd-minute header from Jordi Alba took the match into extra-time. Antoine Griezmann put Barca in front early in the additional 30 minutes, but Granada levelled just before the break when Fede Vico scored a penalty after Sergino Dest was adjudged to have fouled Carlos Neva. However, Barca responded again, with Frenkie de Jong restoring their lead and Alba adding his second of the night with a stunning volley to ensure Ronald Koeman’s side will be in Friday’s semifinal draw.

This felt like a big night for Koeman’s side. Any doubts about their togetherness were blitzed with a rousing comeback that will fill them with belief. They scored five but it could have been 10 — or more. They registered 36 shots and hit the woodwork three times, through Francisco Trincao, Ousmane Dembele and Lionel Messi.

There were big performances all over the pitch, especially from Griezmann, who scored one and set up three. The France international really took responsibility when the tie looked lost. Messi’s fingerprints were all over most goals, too, in another sensational display, even if he didn’t score.

Finally, De Jong and Pedri showed incredible levels of in-game intelligence to know when to pick their moments to attack and when to help defend when Barca were taking risks to get back into the game.

This was two steps back for Samuel Umtiti after some encouraging signs in recent weeks following his recovery from a long-term knee problem. Despite some decent performances, doubts have remained about his ability to perform consistently and against better opposition. Against Granada, he came unstuck, making mistakes for both goals before being taken off in the second half. Sergi Roberto, making his first start after two months out, was taken off injured in the second half.

Manager rating out of 10

7 — Koeman’s attacking changes haven’t worked in the past but they came off this time. Dembele and Riqui Puig were especially good off the bench.

GK Marc-Andre ter Stegen, 7 — Could do little about the goals and was a great sweeper-keeper late on, stepping high to win a header in the build-up to Alba’s first goal.

DF Sergi Roberto, 6 — His return was cut short when he was taken off with an injury in the second half.

DF Ronald Araujo, 7 — Made a couple of uncharacteristic mistakes in the first half but was phenomenal as Barca came back considering he was the only out-and-out defender left on the pitch.

DF Samuel Umtiti, 4 — Was put in a tricky spot for the first goal but even so should never lose the ball in his own box. For the second goal, he was caught ball watching and then didn’t have the pace to keep up with the 35-year-old Soldado.

DF Jordi Alba, 9 — Showed incredible energy to join in attack after attack. Got his reward with two brilliantly taken goals and an assist.

MF Frenkie de Jong, 9 — A tireless performance, taking on a range of different roles throughout the night depending on the needs of the team. Won balls back in defence and scored his sixth goal of the season at the other end.

MF Pedri, 8 — Like De Jong, picked his moments well. The ball was glued to his feet in and around the Granada box and he was good at tracking back, too.

FW Francisco Trincao, 6 — Still waiting for his first Barca goal. Had an effort tipped over in the first half and smashed the underside of the bar in the 62nd minute just before coming off.

FW Antoine Griezmann, 9 — Probably thought it wasn’t his night when a spectacular bicycle kick was saved by Aaron but his luck changed. His shot off the post was turned home by Aaron for Barca’s first, he set up both of Alba’s goals and he scored one of his own in a virtuoso display. Now has 12 goals this season.

FW Lionel Messi, 8 — Didn’t score but his back-post crosses led to the first two goals, his shot led to De Jong’s strike, he smashed the woodwork and drew save after save from Aaron. He didn’t stop.

DF Sergino Dest, 6 — Unfortunate to give the penalty away for a light barge on Neva.

FW Ousmane Dembele, 7 — Hit the woodwork, delivered some dangerous crosses and caused problems with his pace.

FW Martin Braithwaite, 6 — Had a flicked header saved in extra-time and was a presence in and around the box.

MF Riqui Puig, 7 — Didn’t have a direct involvement in any of the goals but his presence played a big part in Barca’s improvement.

At the scene of deadly Ischia mudslide