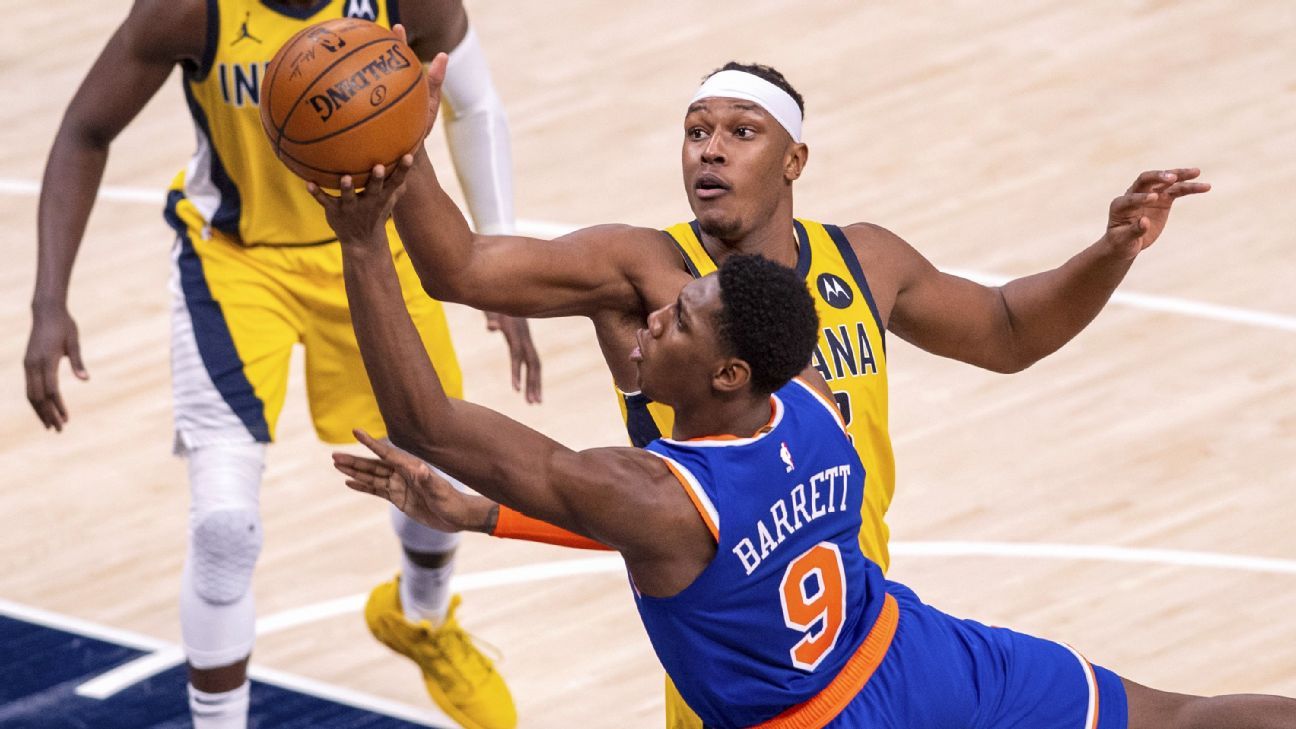 WHEN MYLES TURNER was told he would miss two to three weeks after suffering an avulsion fracture in his right hand on Jan. 14, he had one reaction.

The Pacers’ next scheduled game, against the Phoenix Suns, was postponed, giving Turner time to meet with two hand specialists — one based in Los Angeles and another with the organization — who both told him it wouldn’t require surgery but would be extremely painful to compete. That was all Turner needed to hear.

He showed up to Indiana’s practice facility just five days after getting hurt, sporting a protective pad on his hand and insisting he was ready to go.

“He could’ve very easily just sat on this and said, ‘I’m gonna sit out here the two or three weeks.’ No way, he wasn’t having anything to do with that,” Bjorkgren said. “He knows his importance to this team and also he knows just how active he can create our defense and what he means to protecting the rim for us.”

Turner takes his job as the Pacers’ defensive centerpiece too seriously to miss extended time, especially right now when he’s in the midst of his best season as a pro. The six-year veteran changed his entire approach this offseason, both physically and mentally.

Entering Wednesday night’s game against the Milwaukee Bucks (7 p.m. ET on ESPN and the ESPN app), Turner is averaging 3.9 blocks per game, which would be the most for any player since Hall of Famer Alonzo Mourning in 1998-99. Earlier this season, he blocked at least three shots in 10 consecutive games, the third-longest streak for any player in the past decade.

“You can lead the league in shot-blocking and still not make an All-Defensive team,” Turner told ESPN. That’s exactly what happened to him when he averaged a league-best 2.7 blocks per game in 2018-19.

“My drive this year pushes beyond rim protection,” he continued. “I want to show the league what everyone in Indy’s known for years now — that I’m a defensive anchor and I take pride in that.”

THREE WEEKS BEFORE training camp started, Bjorkgren met with his young star in Santa Barbara, California, where Turner was training, and laid out everything he wanted to see from the big man, setting Turner’s goals for the season.

“My first couple years, I’ve had long-term goals. Like, ‘Oh, I want a championship. I want to be an All-Star. I want to do this, this and that.’ But, I think I had to focus more on the short-term,” Turner said. “Now, it’s like, I’m at this point in my career where every year, I want to get better and better, focusing on myself to better the team.”

As a rookie, Turner started 30 games, but eventually found himself coming off the bench because of the thing he now thrives at, defense. He admitted that he never took that end of the court seriously until he got to the NBA, relying solely on his athletic ability to block shots without learning the finer aspects of what it takes to play NBA-level defense.

“As far as rotations, guarding guys on the perimeter, pick-and-roll defense, I got burnt a lot in certain situations, and I got benched for that,” he said. “So, that kind of just gassed me up in a sense there as well because you can always control that end of the floor, and as I started playing more and more and I had to realize that.”

For Turner, that’s been part of a maturation process that hasn’t gone unnoticed by his teammates.

“He’s just more mature in how he’s thinking about the game, leading as well, listening as well and being able to be led,” Pacers wing Justin Holiday said. “So, Myles has done a great job and allowed the game to come to him as well as if he’s not shooting well, still affecting the game.”

The impact Turner makes on Indiana’s defense is stark. When he’s on the court, the Pacers give up a stingy 104.3 points per 100 possessions, better than the league-leading 104.8 mark of the Los Angeles Lakers. When he sits, the Pacers allow opponents to score 113.8 points per 100 possessions, a mark that would rank 28th in the league. Opponents are also shooting 8 percentage points worse from the field when Turner plays.

“Overall, there has been a jump [in his game],” one Eastern Conference scout told ESPN. “Part of it is just as opponents drive to the lane and try to finish as the rim, he has legitimate size. Whether he blocks the shot, which he’s been doing more this year, or also just altering the shots, he’s definitely a presence.”

This year’s Pacers are playing more zone, allowing Turner to stay close to the rim. Their guards are coached to funnel opponents into Turner, where he can deny them at the rim. They’re building the defense around him, and so far, Turner says the plan has been working.

“When I come out there, defensively, I make a huge difference. I change games,” Turner said. “Fourth quarter, that’s where I really lock in. I really feel like I’m able to push my team and I’ve won a lot of games with my defense, so just knowing that I have that and knowing that my teammates know that I’m back there and being able to have everybody’s back, it makes it easier for everybody.”

Turner is tied for the league lead with five blocks in clutch time (Toronto’s Chris Boucher also has 5), which accounts for 71.4% of the Pacers’ total clutch-time blocks this season. In the fourth quarter and overtime overall, Turner has 16 blocks, second most behind only Utah Jazz two-time Defensive Player of the Year Rudy Gobert (17).

“Just got to pretty much be aware of where he is at all times,” said Collin Sexton, who scored 28 points against the Pacers on New Year’s Eve. “You might think you have a free layup and he might just come out of nowhere and block it, so you’ve got to make sure you’re aware and make sure your eyes are out looking for him.”

“I don’t know how the voting goes with all the awards and all that, but I’m pretty sure he’s up there in the ranks,” Portis said. “I don’t know too many guys that’s averaging four blocks … he’s having a helluva year right now.”

IN THE SHORTEST offseason in NBA history, Turner found ways to grow. Instead of training in his home state of Texas, like he typically does, he went to Santa Barbara, California, where he worked out six days per week at Peak Performance Project (P3) in the mornings. In the afternoons, he participated in private basketball workouts and film sessions with personal trainer, Ross McMains, where they always ended with film sessions. He also studied players like Kevin Garnett and Chris Bosh, focusing on their defensive play.

McMains and Turner worked together to break down his game, body movements and tendencies. Inside P3, they targeted his hips, core, glutes and entire lower body for him to become agile enough to defend in all different scenarios such as pick-and-roll, on the perimeter and rotations in addition to shot-blocking.

“P3 worked to improve the mechanics of his foot and ankle, his ability to maintain control of his trunk/torso during dynamic movements and general lower body power,” P3 general manager Adam Hewitt said. “During his time, Myles increased concentric force output by 13%.”

That increased explosiveness, a new Pacers system more tailored towards his strengths, plus Turner’s emphasis on mental health has produced the perfect marriage.

“He was this big-time talent that was just kind of waiting to take off,” said McMains, a former Sacramento Kings assistant coach. “There’s still a lot more untapped there.”

In his second game back after learning about the right hand fracture, he swatted six shots against Toronto then racked up another five against Charlotte on Jan. 27 while competing in the white, protective pad.

Still, Turner says he feels like he has a point to prove every time he checks into a game. Playing in Indiana, it’s easy for his accomplishments to go under the radar — Wednesday’s game is one of just two on national TV for the Pacers in the first half of the season. That’s part of the reason why he wasn’t going to let a hand fracture stop him from showing he belongs in the conversation as one of the NBA’s elite defenders.

“I have an opportunity to do something special this year individually,” Turner said. “Becoming Defensive Player of the Year.”