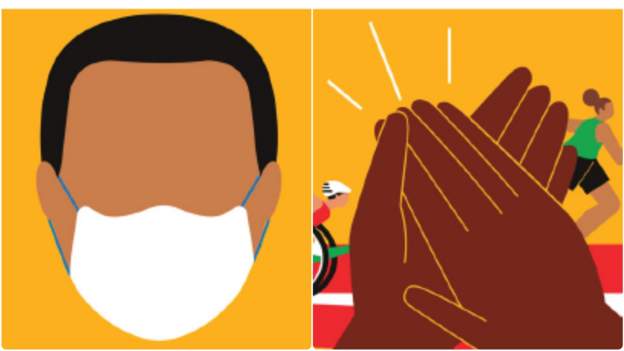 
Singing or chanting will be discouraged at the re-arranged Tokyo Olympics and Paralympics in a bid to safeguard against the spread of coronavirus.

Instead, those attending the Olympics – due to begin on 23 July – and Paralympics – set to start on 24 August – will be encouraged to clap in order to show support.

The suggestion is one of a number of rules detailed in a ‘Playbook’ published by organisers.

The first Playbook is aimed at members of international federations and technical officials but further versions due to be published will be aimed at athletes and media.

The move to highlight the processes in place to ensure a safe Games comes as organisers stress they are committed to a “successful and safe delivery” of the Games, despite Tokyo currently being in a state of emergency due to the coronavirus pandemic.

Under a page titled “think hygiene” the Playbook says individuals should “support athletes by clapping and not singing or chanting”.

In addition attendees will have to complete a “14-day activity plan” detailing “all your planned activities”, including travel and accommodation plans.

While the first Playbook is not aimed at athletes, it would also appear competitors may not be allowed to attend other sporting events at the Games.

“You must only leave your accommodation to go to Official Games Venues and limited additional locations,” the Playbook adds.

‘Attend at your own risk’

The plans stress, however, that risk cannot be “fully eliminated” and that attendees do so “at your own risk”.

A vaccination will not be compulsory for those attending the Games, although a negative Covid-19 test in the four weeks leading up to the event will be, while athletes will be be tested a minimum of every four days during the Games.

Attendees must adhere to the rules outlined in their Playbook or risk having their accreditation or right to be at the Games withdrawn.

Further guidelines include avoiding enclosed spaces and physical contact “including hugs and handshakes”, and that public transport should not be used unless permission is given.

IOC president Thomas Bach has repeatedly stressed that the Games will go ahead despite speculation to the contrary.

IOC executive director Christophe Dubi said: “We each have our part to play. That’s why these Playbooks have been created – with the rules that will make each and every one of us a sound, safe and active contributor to the Games.

“We know these Olympic Games will be different in a number of ways. For all Games participants, there will be some conditions and constraints that will require flexibility and understanding.

“You will see that we have asked for an activity plan, why? Not because we want to restrict the freedom, but because we want to make sure that all activities are taking place safely and in case there is an issue everybody can be informed properly and traced back, people can be contacted when needed.

“By committing to following the Playbooks we will be stronger together. In return, the Olympic and Paralympic Games Tokyo 2020 will be remembered as a historic moment for humanity, the Olympic Movement and all those contributing to their success.”

Premarket stocks: How Amazon can keep thriving even without Jeff Bezos