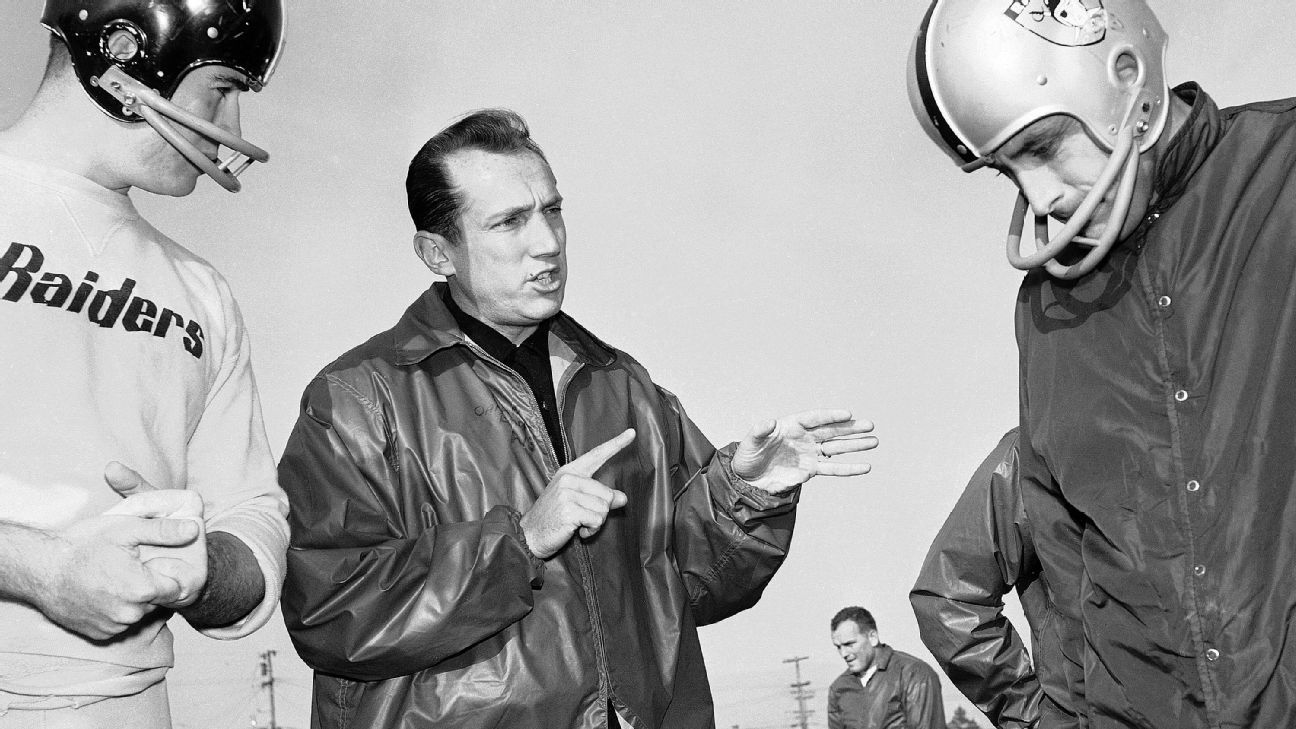 
HENDERSON, Nev. — The feud between former NFL commissioner Pete Rozelle and late Raiders owner Al Davis was more than legendary, it set the stage for the NFL becoming what it is today — a billion-dollar industry that is more national obsession than national pastime. ESPN’s 30 for 30 special “Al Davis vs. the NFL” delves into the rivalry and debuts Thursday on ESPN (9 p.m. ET) and ESPN+. Here’s a timeline of the events that brought Rozelle and Davis together and drove them apart.

1963: Davis joins the Oakland Raiders as general manager and head coach, changing their color scheme from black and gold to silver and black. The Raiders also improve from 1-13 to 10-4.

1966: Davis becomes AFL commissioner on April 8. On June 8, the AFL-NFL merger is agreed upon. Davis then resigns as AFL commissioner on July 25 and rejoins the Raiders as managing general partner. Davis is not happy with Rozelle getting a lion’s share of the credit for the merger, setting the stage for the drama to come.

1968: The Raiders appear in Super Bowl II, falling to the Packers 33-14 on Jan. 14 in Miami’s Orange Bowl. It is the first of five Super Bowl appearances by Davis’ team.

1976: Rozelle testifies in Raiders safety George Atkinson’s $2 million slander suit against the Pittsburgh Steelers and coach Chuck Noll, who referred to Atkinson’s play as part of a “criminal element” in the NFL. Rozelle removes Davis from the competition committee, essentially, as Rozelle said, using Atkinson as a “straw man” in a suit against the league.

1977: The Raiders culminate a stretch of eight AFL/AFC title game appearances in 10 seasons by winning a Super Bowl, beating the Minnesota Vikings 32-14 at the Rose Bowl on Jan. 9. Rozelle presents the Lombardi Trophy to Davis.

1980: Davis signs an agreement to move the Raiders to Los Angeles on March 1, in the wake of the Rams vacating the Los Angeles Memorial Coliseum for Anaheim. NFL owners block the move. Davis files an antitrust lawsuit against the NFL, and the Raiders remain in Oakland, where they go on a playoff run.

1981: The Raiders become first wild-card team to win the Super Bowl, beating the Philadelphia Eagles 27-10 in New Orleans on Jan. 25, setting up a potentially explosive Lombardi Trophy presentation from Rozelle to Davis. There were rumors something would go down between the two on the dais. But as then-Raiders coach Tom Flores told ESPN, “The game was bigger than the two of them and neither of them would degrade the game. They loved the game too much to degrade the moment.”

And while Flores said he knew nothing of a supposed players’ prank on Rozelle during the presentation, one former Raider laughed at the suggestion, saying, “Some things are better left in house.” Yes, 40 years later. Meanwhile, Davis’ antitrust suit begins and ends in a hung jury on Aug. 13. A retrial is scheduled.

1982: Raiders brass has to get ahold of Davis on a Los Angeles courtroom payphone to get his OK to draft USC running back Marcus Allen, who exclaims, “I’m an Oakland Raider,” upon getting the call at home. Allen would never play in Oakland, though, as Davis wins the retrial and the right to move to Los Angeles as a jury on May 7 decided the NFL violated antitrust laws. “We’re fighting for a principle,” Rozelle said at the time, promising an appeal. “We don’t think the antitrust laws were intended to let a team just get up and move after 12 straight years of sellouts and to set up a situation where every team can conduct an auction for its franchise when its lease is up.”

The Raiders practice in Alameda, California, during the week but play home games in Los Angeles during the strike-shortened 1982 season, in which they go 8-1 but lose a second-round playoff game to the New York Jets.

1984: The Los Angeles Raiders win Super Bowl XVIII against defending champion Washington 38-9 on Jan. 22 in Tampa, Florida, setting up another potentially awkward trophy presentation from Rozelle to Davis. A handshake is shared.

1985: Rozelle is enshrined in the Pro Football Hall of Fame.

1986: Davis sides with the USFL in its lawsuit against the NFL, which resulted in a $1 judgement for the USFL. The upstart league folds.

1987: Replacement players are used in a 15-game, strike-shortened NFL season. Davis accepts a nonrefundable $10 million check to move to the L.A. suburb of Irwindale. The move never happens.

1989: A teary Rozelle, 63, announces his retirement at the NFL owners meetings in Palm Springs, California, citing the feud with Davis as a contributor to his decision. “We were fierce competitors but there was always admiration and even a little bit of love and emotion,” Davis said that day. “We got caught in a Vietnam affair where it never ended, for the last 10 years.” Rozelle’s retirement takes effect on Nov. 5.

The story of decades-long battle between the Raiders’ owner and NFL commissioner Pete Rozelle debuts Feb. 4 and can be viewed on ESPN+. Watch on ESPN+

1992: Davis is enshrined in the Pro Football Hall of Fame.

1995: The Raiders have designs on building their own stadium in Inglewood, California, but Davis balks when the NFL, in exchange for financing, asks him to take on a second team. Instead, the Raiders return to Oakland, signing a letter of intent on June 23.

Pope in South Sudan tells clergy to raise voices against…