Ohio State Buckeyes rise up toward being No. 1 seed 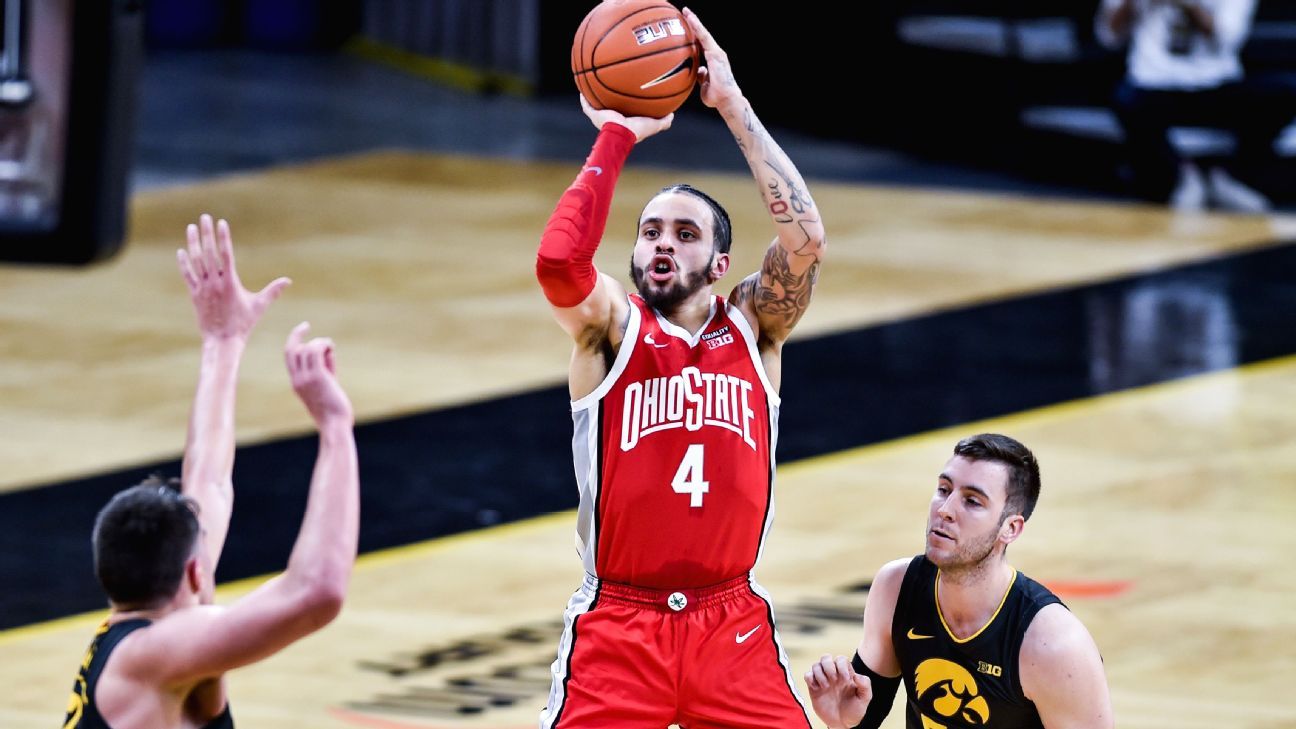 
It’s time to add Ohio State to the conversation for a 1-seed come Selection Sunday. The Buckeyes went into Iowa on Thursday, made 14 3-pointers and departed with an 89-85 win over the Hawkeyes.

The 1-seeds in most projected brackets the last few weeks have included a rotating cast of characters alongside the Zags and Bears. Villanova has been a staple, but the Wildcats just lost convincingly to St. John’s. Houston had played itself into the mix, but the Cougars suffered a shocking loss at East Carolina on Wednesday night. Michigan hasn’t played in two weeks and it’s unclear how the Wolverines will look after their COVID-19 pause — or when they will play again. Texas and Iowa also have had some weeks on the top line, but both the Longhorns and Hawkeyes have lost three of their last four.

After Thursday’s win in Iowa City, Chris Holtmann’s Buckeyes certainly have a path to a 1-seed, and one can say they control their own destiny for it.

Ohio State now has the most Quadrant 1 wins in the country with seven, including victories on the road against Illinois, Iowa and Wisconsin. There’s a sweep of Rutgers and a December win over UCLA in Cleveland. The sheer quantity of quality wins compares favorably to the other candidates: Villanova has two Quad 1 wins, while Iowa, Houston, Texas and Michigan have three apiece. The closest teams to Ohio State (besides Baylor and Gonzaga) in the Quad 1 win category are Illinois and Alabama, with five apiece.

According to ESPN Stats and Information research, the Buckeyes’ five wins against teams in the AP Top 25 this season are the most in Division 1, as are their four road wins over AP Top 25 teams.

Entering Thursday, Ohio State was No. 12 in the NET, No. 12 in the BPI and No. 10 at KenPom. The Buckeyes were No. 7 in ESPN’s Strength of Record metric, which measures a team’s résumé. And they’re going to rise in each of those metrics after beating Iowa.

Ohio State has one of the best offenses in college basketball, with matchup problems E.J. Liddell and Justice Sueing consistently causing issues for defenses with their versatility. Duane Washington broke out of his slump Thursday, and Justin Ahrens has proved a real boost for the Buckeyes in Big Ten play with his outside shooting. Kyle Young is a glue guy up front who crashes the offensive glass, and Zed Key is an old-fashioned back-to-the-basket post player who is effective against opponents with legitimate post players. CJ Walker’s return from injury has solidified the point guard spot; he had nine assists and just one turnover against Iowa on Thursday. In other words, the Buckeyes check the “eye test” box too.

There’s still a long way to go until Selection Sunday — but that also means Ohio State has plenty of chances remaining to boost its profile further. Among others, the Buckeyes still have to face Michigan, while second games against Iowa and Illinois remain on the schedule. But all three of those teams have to come to Columbus, where Ohio State has lost just one game this season and lost just two last season.

We’re not expecting the Buckeyes to run the table to earn a 1-seed but they probably won’t have to; given the unpredictability of college basketball this season, it’s unlikely anyone besides Gonzaga and Baylor (and maybe Drake) will go unbeaten the rest of the way.