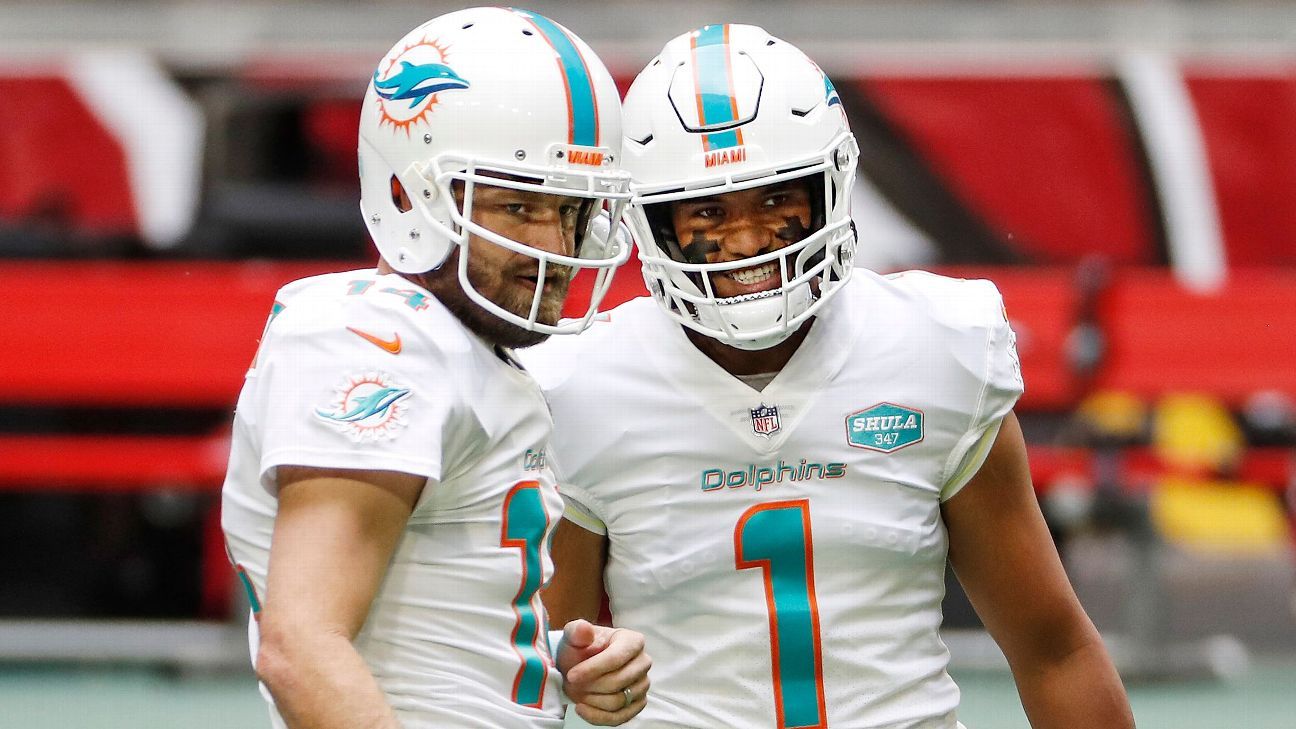 
DAVIE, Fla. — Count Ryan Fitzpatrick among those expecting the Miami Dolphins to push forward and build around Tua Tagovailoa in anticipation of a big leap in Year 2.

Fitzpatrick has heard the early offseason criticisms of Tagovailoa and the trade rumors connecting unhappy Houston Texans quarterback Deshaun Watson to Miami, but he’s not worried about Tagovailoa at all.

Fitzpatrick believes there are several good reasons Tagovailoa will be much improved for the Dolphins in 2021.

“To have an offseason, to have repetitions, to have some sense of continuity with [co-offensive coordinators] George Godsey and Eric Studesville in his ear calling the plays and working with him. All that stuff points to him having a much better season this year and continuing to progress as a quarterback. That’s the most important thing for him — progression.

“They drafted him in the top five for a reason, with his skill set and what he can do. There are very few people on this planet who can do that. For them to be fully bought in and believe in him, he’s going to do the same thing. He’s going to buy into what they’re coaching and I think good results are going to come from it.”

In 2020, Fitzpatrick, 38, happily played mentor to Tagovailoa as a rookie in Miami. The two jelled extremely well with Tagovailoa willing to learn by watching early on and Fitzpatrick embracing his self-proclaimed “placeholder” role. Although he’s set to be a free agent in March, Fitzpatrick offered Tagovailoa one more piece of advice on how to handle the offseason noise, notably regarding Watson.

“That’s the nature of being a QB in the spotlight,” Fitzpatrick said. “Unless you’re winning the Super Bowl, there are always going to be questions and rumors. You look at a guy like Jared Goff, who was in the Super Bowl a few years ago and a No. 1 pick, now he’s on another team.

“I saw Tua’s comments from the other day. The advice I would give him and what he’s going to do is put your head down, you go to work, you tune all that stuff out and you let your presence, leadership ability and play on the field doing all the talking for you. There’s always going to be rumors. There’s always going to be haters and doubters. As long as you have the belief in yourself and a team that believes in you because of how you carry yourself every day, that’s what matters. It gets harder and harder as social media is such a big part of everybody’s life now to tune it out, but that’s what he has to do, and that’s what I think he’s going to do.”

Tagovailoa, appearing on ESPN’s Get Up on Thursday morning, responded to the Watson trade rumors, saying he’s just focusing on improving in his second season.

“I can control what I can control,” he said. “I’m the quarterback for the Miami Dolphins.”

As Fitzpatrick spoke with ESPN while promoting Mountain Dew, this week marked the first time he talked publicly since Week 16, when he came off the bench to lead Miami to a comeback victory over the Las Vegas Raiders. He tested positive for COVID-19 just a few days later, making him ineligible for the Dolphins’ season-ending loss to the Buffalo Bills. Fitzpatrick said he lost his sense of smell and taste until earlier this week, but that he was otherwise asymptomatic and no one else in his family caught the virus.

As for Fitzpatrick’s future, he plans to play his 17th NFL season in 2021 in what he called a “really easy” decision. He says he’ll “never say never” in regard to a return to Miami, but that he has been in the league long enough to know how these things go. He praised the city and franchise for what has been a great two seasons.

Fitzpatrick played a huge role in guiding the Dolphins from a rebuilding team to one of the NFL’s best stories in 2020, as Miami made a five-win jump to a 10-6 record. However, he’s expected to seek a larger role from a more quarterback-needy team.

Fitzpatrick started seven games in 2020, completing 68.5% of his passes and throwing for 13 touchdowns and eight interceptions. He also had a 77.1 QBR and was the unquestioned leader of the Dolphins. He could be in line for another a bridge starting-quarterback role or a chance to compete for a starting job in a number of places.

“I love being out there,” he said. “I love playing. I love the grind. I love the adversity with my teammates. I love being part of a team. These decisions have become heavier in recent years with some of that stuff but I’ve got a really supportive family and looking forward to continuing on and playing next year. All things being equal, I want to be out there on the field playing. It’s just a lot more fun for me to be playing than it is to be sitting and watching. I’m going to see what’s out there and make an informed decision with my family.”

Ohio State Buckeyes rise up toward being No. 1 seed