Wooden Watch — Can you make a case for someone other than Luka Garza? 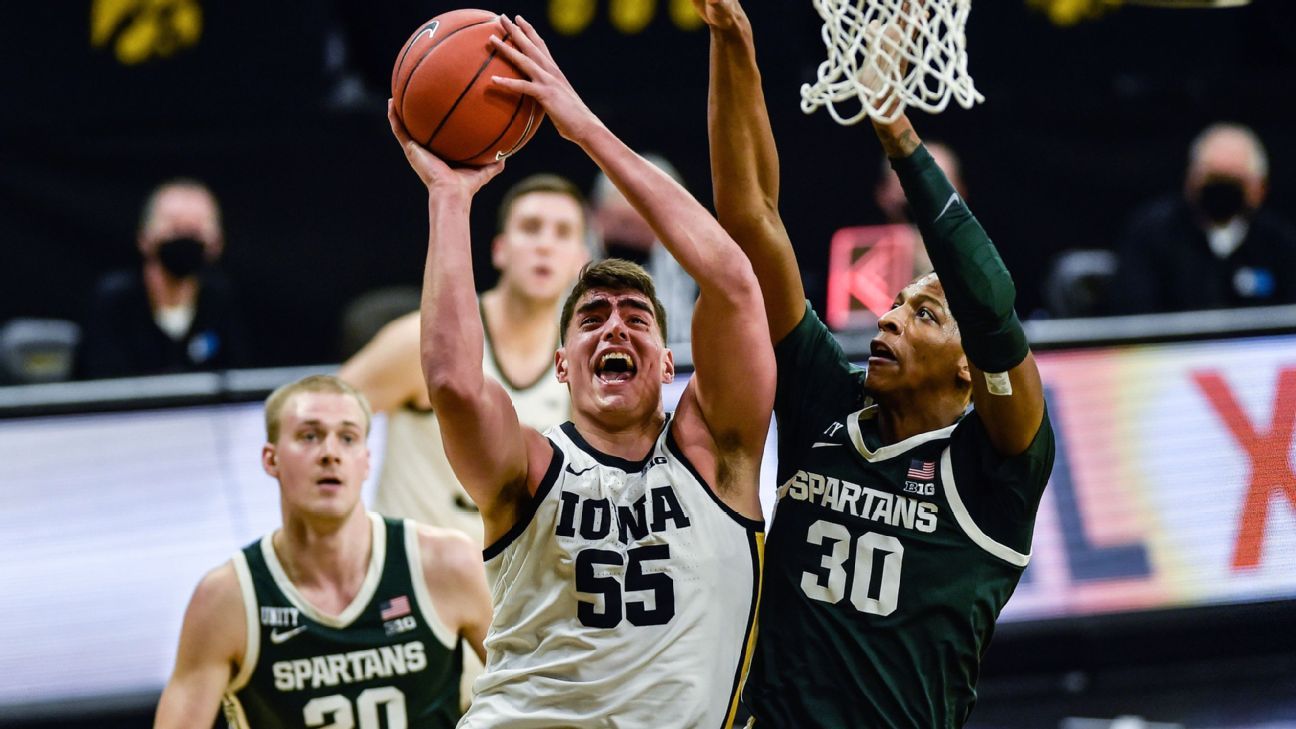 
The watch list of 20 players for the 2021 John R. Wooden Award was announced Monday in a race that is shaping up as a matchup of Iowa’s Luka Garza — the nation’s leading scorer and last season’s Wooden runner-up — against the field. With roughly a month to play in the regular season, ESPN.com’s panelists sized up Garza’s candidacy, while trying to identify someone else who might have a case to challenge him for the honor.

What’s the top three of your Wooden ballot look like right now? If forced to make a case for someone other than Iowa’s Luka Garza at the top, could you make a reasonable argument?

Myron Medcalf, senior college basketball writer: The top of my ballot is Luka Garza, Jared Butler and Corey Kispert. Ayo Dosunmu is right there. The other Gonzaga guys — Jalen Suggs, Drew Timme, too — but I just think Garza separated himself from the pack a long time ago.

The greatest difference is the rest of the guys on the list have a stronger supporting cast. Gonzaga is stacked. Baylor, too. Butler went 6-for-18 on Saturday against Auburn and Baylor still won by double-digits. He went 2-for-11 against Texas Tech last month and Baylor still found a way to win.

Illinois has four players not named Dosunmu averaging at least eight points, including Kofi Cockburn, who is averaging a double-double. But Garza is carrying Iowa. He doesn’t have that level of depth to help his team beat good opponents if he struggles. His worst night this season was a 6-for-18 (16 points) effort in a victory over UNC. Four days later, UNC struggled early against North Carolina Central as it stumbled to a 5-4 start. He had 30 points against Gonzaga and Iowa still lost by double-digits. Imagine what would have happened if he had gone cold that day?

He’s shooting 46% from the 3-point line. At 6-foot-11. If the Wooden Award is this sport’s MVP, then Garza has a Teflon case. A more interesting discussion is, “Who will join Garza on the list of first-team All-Americans?” But national player of the year? The strong collection of talent behind him is in a tight race for second place.

Jeff Borzello, college basketball insider: Garza clearly is at the top, then I’ll go with Butler and Dosunmu. There should probably be a Gonzaga player in that mix, but Drew Timme, Corey Kispert and, to a lesser extent, Jalen Suggs split the vote.

I’m not sure there’s a legitimate argument for picking anyone besides Garza — but I think I could make a case for Butler if really pushed. Look, he’s the best guard in college basketball and he’s doing it on one of the clear-cut two best teams in the country. I also think he’s playing his best basketball at the right time. He was tremendous against Kansas and Oklahoma State a couple of weeks ago, then had 21 against Texas on Monday night. Butler was an All-American-caliber player last season and his numbers are up across the board this season: scoring, passing, shooting, adding a couple of steals. He’s also really difficult to handle late in games.

Baylor hasn’t been in a close game yet this season — zero games within an eight-point margin — but Butler’s second-half efforts are a big reason for that. He turned it on late against Texas Tech, was on fire against Oklahoma State coming out of halftime, and seems to have a stretch every game where he buries three or four shots in a row to give the Bears breathing room.

John Gasaway, college basketball writer: On the one hand, I could really get behind a campaign to replace Garza with Butler as the consensus national player of the year. The following fun fact can change day to day, but there have been stretches this season in which Butler has simultaneously had both the highest assist rate and the highest steal rate in Big 12 play. And that’s coming from a guy who’s making the same (ridiculous) percentage of his 3s as Garza, and is doing so at a higher volume. Put it this way: There’s little doubt in my mind that Butler’s been the best all-around player in the country this season. If you’re going to war, you want him on your side.

Matt Coleman III misses a jumper for Texas and Jared Butler gets it on the other end to sink a 3-pointer for Baylor.

But then I think about it some more and what I’m going to call the “Medcalf test” pushes my POY vote back to Garza. If Baylor lost Butler, the Bears very well might still finish the regular season undefeated. If Illinois lost Dosunmu, my No. 3 pick, coach Brad Underwood, would give more minutes to Andre Curbelo (granted, losing some perimeter scoring in the process). If Gonzaga lost Timme, or Kispert, or Suggs, the Bulldogs likely would still run the table heading into the NCAA tournament. But, as Myron rightly indicates, if Iowa lost Garza, the whole essence of the Hawkeyes would collapse in an instant.

Fran McCaffery has what on paper is the best offense in the country and he can make that claim because Luka Garza is on the floor. Jordan Bohannon and Joe Wieskamp have combined to make 75 3s this season because help defenders are drawn to Garza like a magnet. The Hawkeyes generate more shots by far than any other Big Ten offense because Garza is a high-usage star with a ridiculously low turnover rate. Subtract him from the team and the whole high-efficiency machine grinds to a halt. Garza is my pick for POY.

Joe Lunardi, ESPN bracketologist: It’s Garza, if only because Iowa — without his offense — would be nowhere near the Top 10. The rest of the Top 10 has an average defensive efficiency ranking of 17.9; Iowa checks in at No. 117. The topic has been beaten to death, but there will almost certainly come a night in March when not even Garza can score enough to save the Hawkeyes. In the meantime, he and Iowa are incredibly fun to watch. My vote goes to Big Luka, with a Wendy’s franchise thrown in as a sponsor’s bonus.

Having said all that, Butler is having an extraordinary season. At the offensive end, he is efficient and deadly with a shooting line of .536 FG/.446 3PT/.756 FT. Those are near-video game numbers for a guard (and, if you really want your eyes to roll, look at Garza’s). These are the best two players in the country by a wide margin, with the added bonus for Butler being that his defense keys a Baylor team that punishes opponents at both ends. Garza’s overwhelming numbers will get him the trophy, but Butler’s all-around excellence is driving an undefeated season.

I’m taking the easy way out for third place, declaring a three-way tie among the Gonzaga trio of Kispert, Timme and Suggs. Someone from the Zags has to be on the list and each is critical to Gonzaga’s ongoing dominance. Honorable mention to Cameron Krutwig of Loyola Chicago. The best mid-major player in the country went to the Final Four as a freshman and is headed back to the NCAA tournament as a senior. Kofi Cockburn is rightfully praised, but he’s not even the best center in his own state.