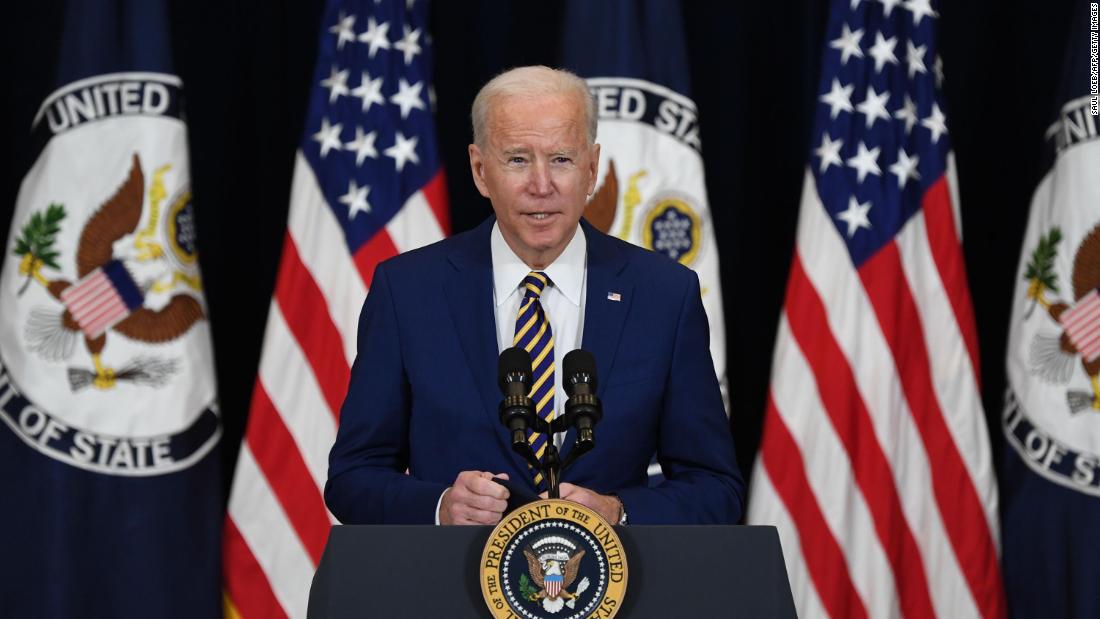 Biden’s announcement at the State Department was just one of the significant changes he said he will make to US foreign policy, including freezing troop redeployments from Germany, raising the cap for refugees allowed into the US and reaffirming US support for LGBTQ rights worldwide.

In a call for values-led engagement with the world, Biden stressed that the global challenges of the moment, including the need to counter “advancing authoritarianism,” will “only be solved by nations working together.”

“We can’t do it alone. … We must start with diplomacy rooted in America’s most cherished democratic values,” Biden said. “Defending freedom. Championing opportunity. Upholding universal rights. Respecting the rule of law. And treating every person with dignity.”

Biden acknowledged the threat to those values and to US global standing from the attempted insurrection encouraged by former President Donald Trump.

“Though many of these values have come under intense pressure in recent years, even pushed to the brink in the last few weeks, the American people are going to emerge from this moment more determined and better equipped to unite the world to defend democracy because we have fought for it ourselves,” the President said.

He delivered his speech after making less formal remarks to State Department employees, telling them that “we’re going to rebuild our alliances. We’re going to reengage the world and take on the enormous challenges we face dealing with the pandemic, dealing with global warming and again, standing up for democracy and human rights around the world.”

The President, who visited the State Department on Thursday with Vice President Kamala Harris, used the speech not only to unveil policy changes, fulfill campaign promises and reverse Trump administration policies, but also to reassert US global leadership and realign foreign policy to better service the middle class.

“Everything” the Biden administration does when it comes to foreign policy will be examined as to whether it makes life “better, safer and easier for working families,” national security adviser Jake Sullivan told reporters in a briefing to preview the President’s remarks.

Biden announced that “we are ending all American support for offensive operations in the war in Yemen, including relevant arm sales,” and said he will appoint an envoy to focus on the long-standing conflict. He said the conflict is “a war that has created humanitarian and strategic catastrophe,” but he also made clear the US will “continue to help and support Saudi Arabia.”

Biden said Secretary of Defense Lloyd Austin will lead a “global force posture review” and, while that review is ongoing, will “freeze any troop redeployments from Germany … so our military footprint is appropriately aligned with our foreign policy and national security priorities.”

The President also announced his intention to increase the number of refugees admitted into the United States after years of historical lows under the Trump administration, and fulfill a campaign promise in doing so.

The Trump administration set a refugee cap of 15,000 for this fiscal year, the lowest since 1980. On Thursday, Biden said he will raise the admissions cap back up to 125,000 persons for the first full fiscal year of his administration and will direct the State Department to work with Congress on the issue.

“The United States’ moral leadership on refugee issues was a point of bipartisan consensus for so many decades when I first got here. We shined the light of the lamp of liberty on oppressed people,” Biden said. “It’s going to take time to rebuild what has been so badly damaged. But that’s precisely what we’re going to do.”

The President also announced he would issue a presidential memorandum to agencies “to reinvigorate our leadership on the LGBTQI issues, and do it internationally” as part of an effort “to further repair our moral leadership.”

“We’ll ensure diplomacy and foreign assistance are working to promote the rights of those individuals included by combating criminalization and protecting LGBTQ refugees and asylum seekers,” Biden said.

His comments build on the commitments Secretary of State Antony Blinken made during his confirmation hearing to swiftly appoint an LGBTI envoy, allow embassies to fly the pride flag and formally repudiate the findings of former Secretary of State Mike Pompeo’s controversial “Commission on Unalienable Rights.”

Biden put particular emphasis on the need to rebuild America’s moral standing after four years of a president who rebuffed traditional alliances and increasingly scorned democratic norms; a tenure that saw peaceful protesters violently dispersed before a photo op; an embrace of conspiracy theorists and White nationalist groups; and ultimately a deadly insurrection aimed at overturning the results of a free and fair election.

“We will compete from a position of strength by building back better at home, working with our allies and partners, renewing our international institutions and reclaiming our credibility and moral authority, much of which has been lost,” Biden said.

The President touted his administration’s moves to elevate cyber by appointing the first national deputy security adviser for cyber and emerging technology, to weave climate objectives into all diplomacy and to rejoin the World Health Organization and the Paris climate agreement.

And he touched on a few specific cases. He called on the Burmese military to “relinquish power they have seized. Release the advocates and activists and officials they have detained, lift the restrictions in telecommunications and refrain from violence.”

Biden hailed Wednesday’s agreement to extend the New START Treaty with Russia, to preserve the only remaining nuclear arms agreement between them, but also criticized Russia for jailing opposition activist Alexey Navalny. “He should be released immediately and without condition,” he said.

The President spoke only generally about China, saying the US will confront Beijing’s “economic abuses, counter its aggressive, coercive action to push back on China’s attack on human rights, intellectual property, and global governance.” But some thorny issues — including nuclear negotiations with Iran and the continuing conflict between Israelis and Palestinians — he didn’t mention at all.

Biden and Harris’ visit to America’s oldest Cabinet agency was meant “to make sure we know that we have their support, and that means a great deal,” Blinken said.

Biden and Harris repeatedly told the diplomats gathered in the auditorium and those watching online how much value the administration places in their work.

Harris told the department that “this is the foundation on which we stand” and “everything you do … makes a difference in the lives of everyday Americans.”

Biden in particular hammered the point home. “In our administration, you’re going to be trusted and empowered to do your job,” the President first said in his remarks to staff and then reprised the theme in his second, more formal speech. “This administration is going to empower you to do your jobs,” Biden said, “not target or politicize you.”

Myanmar coup: Does the army have evidence of voter fraud?