Covid destroyed lives spent together. Now those left behind must say farewell by Zoom 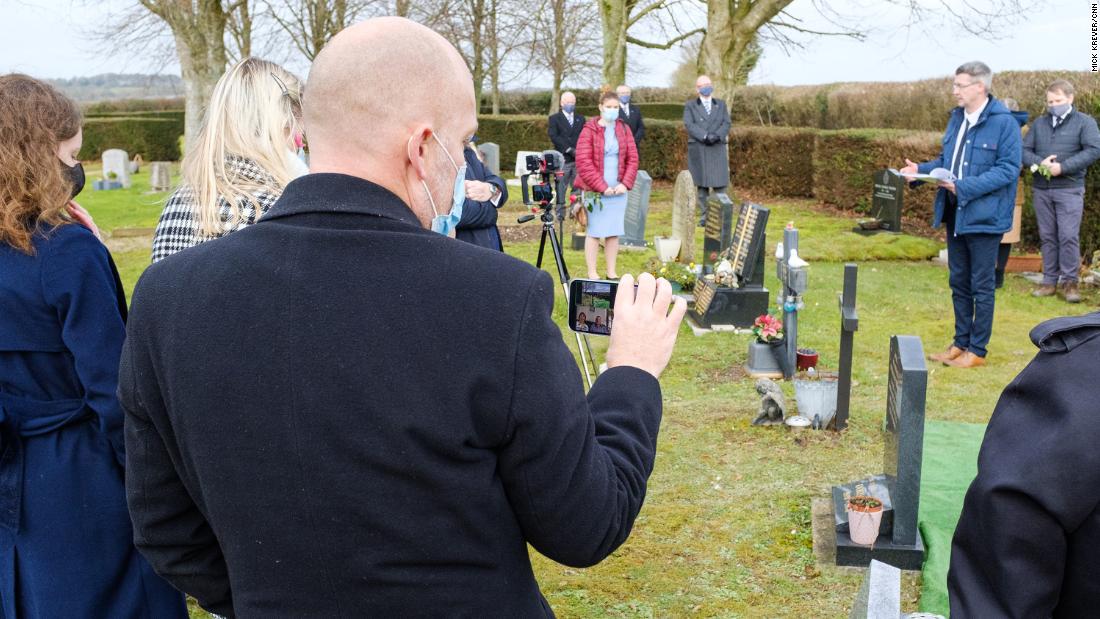 One hundred miles away, near the southern English coast, someone holds up an iPhone as a coffin containing the body of Herbert John Tate, 103, is lowered into a wet, clay-lined grave.

The Zoom call is as much closure as Skinner, 72, can get — at least for now.

“It’s not how it’s supposed to be,” she says. “There’s no interaction, physically. And that’s the biggest thing that’s missing during this terrible time.”

“It would have been an absolute huge party,” Skinner says, imagining the send-off she’d like to have given her father. “It would be solemn there at the graveside. But afterwards we would be singing and dancing and having a great time, because that’s what Dad would have enjoyed.”

Tate was a devout Christian, a lover of spiritual music, and a loyal partner to his late wife Doris, whom he had known since they were children. He was a strict man, Skinner says, whose commitment to family was the major theme of his funeral.

“He was desperate to be with my mum,” she says. “And I’m just so relieved that he’s out of that body that was causing him so much pain.”

Skinner is profoundly aware of the connection she has to others in her position. She recalls, earlier in the pandemic, seeing a news report on TV about a mass burial.

“I couldn’t imagine how people must be feeling,” she says. “And the fact that they’re losing closer loved ones — husbands and wives, children maybe — and not be allowed to be with them. [They] must be absolutely distraught.”

Missing out on coping mechanisms

Edwina fitzPatrick understands that feeling. She spent months mourning, largely alone, after her partner died just days before the UK went into its first lockdown.

In a long wool coat in her south London garden, fitzPatrick, 59, warns the tramping photojournalist away from her two bee colonies with a laugh. She is wearing a large brooch of a bee. The honey-making was her husband’s project. Now it is hers.

Last March, back when the threat from Covid-19 seemed more abstract, she and her husband Nik Devlin began feeling unwell. They didn’t think too much of it, assuming it was n’t anything serious.

When his condition worsened fitzPatrick called the National Health Service’s helpline; she says she was told he should simply stay at home if — as they thought at the time — they hadn’t been exposed to someone with Covid-19.

But when he started coughing up blood, she called an ambulance. It arrived at 1.30 a.m. He was quickly moved to intensive care.

“I wheeled him through with one of the nursing staff, through the hospital,” she recalls. “That’s the last I saw of him — waving through a window and blowing kisses at each other.”

Just over a week later, after being put on a ventilator, and then dialysis, Devlin was dead. He was 56.

“It’s so sudden,” fitzPatrick says. “You don’t really have time to digest it. If somebody was slowly dying — you know, if there was cancer, for example — you get more preparation than this.”

Devlin was her best friend — she says he pursued her so relentlessly that he later joked she married her stalker.

“He was so much fun to be with,” she says. “He was creative. There was a huge emotional intelligence with Nick. He used to … say … ‘Every night we’ll put our love to bed, and every morning we’ll wake it up again.'”

FitzPatrick says that in losing her “beloved,” to Covid-19 she, like many others, was forced to experience “bereavement, plus trauma” — a combination of sudden death, potentially being ill oneself, and missing out on the normal coping mechanisms.

The day Devlin died, fitzPatrick returned from the hospital to a home filled with his things. Her brother cycled over to be with her, but just days later, the country locked down, and she was alone.

“I did think very strongly and seriously about committing suicide that first weekend,” she says, adding that she decided to stay alive to see Devlin’s first novel through to publication — which she did, last summer.

Normal life, fitzPatrick says, is “you and your partner and your friends and your community.” Coronavirus — and the lockdowns and restrictions it has led to over the past year — mean “that kind of disappeared. So, you’ve just got this one thread, no safety net.”

After months of thinking about Devlin, she decided to take action. She found a counsellor and set up CovidSpeakEasy: Weekly Zoom sessions for those left behind, to speak in a way they cannot with anyone else.

“I have a stock phrase, which is: ‘I have good days and bad days,'” fitzPatrick says, explaining. “We don’t want to tell people just how terrible we’re feeling, both physically and mentally.”

Samie Miller, 46, is struggling to come to terms with her father’s death, and says others’ expectations about the traditional grieving process, and the delays caused by the pandemic, have not helped.

“Some people think that I should be okay, and over it,” she says, breaking down in tears. “And I’m not. I’m not at all. I’m waiting for bereavement counseling. I don’t know how to live without my dad.”

Miller’s father, David, was taken to hospital last April. After running a high temperature, he collapsed at home. Arthritis aside, she says he was a healthy 66-year-old.

The last time Miller saw him, he was being wheeled through her parents’ garden to a waiting ambulance. He was put on a ventilator the next day, and died just over two weeks later.

“I never thought in a million years that would be the last time,” she recalls, standing in the same spot, in a small former coal-mining village in northern England, 10 months later.

Miller says the pandemic has extended her suffering by holding up the usual moments that help to bring closure. She says it took six months to have his gravestone made.

She is determined that her father’s death should not go unnoticed.

When St. Paul’s Cathedral, in London, began a digital memorial called “Remember Me,” she jumped at the opportunity to get involved, uploading a photo of her father, smiling mischievously, with a straw hat and a sun-kissed complexion.

He was “my best friend, my go-to person,” she says. “My dad deserves to be remembered. He was a family man. He loved his family. He was amazing. And I want people to know [that] in hundreds of years to come.”

She says that even now, approaching the first anniversary of his death, she sometimes feels like she is living someone else’s life.

“You know when you’re watching the news, you’ve got all these facts and figures coming up, and … then you think, hang on a minute, I’m one of them families,” she says. “I lost my Dad. They’re talking about my Dad. And that’s hard, so hard.”

CovidCovid destroyed lives spent together. Now those left behind must say farewell by Zoom - CNNdestroyedfarewellleftLivesspentuk
0
Share

Uighur: US condemns reports of rape in Chinese camps

Zion Williamson and Brandon Ingram can score for New Orleans Pelicans, but now they’re starting to lead on defense too