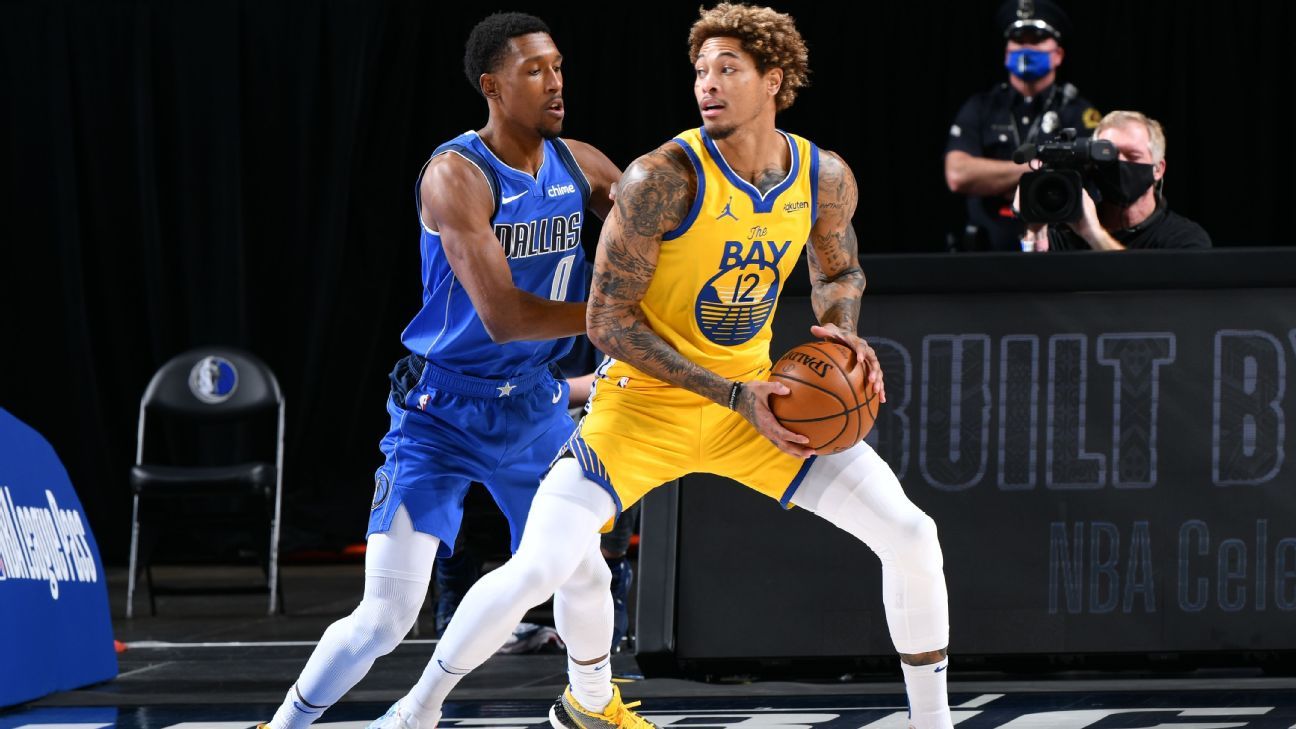 
Stephen Curry had a simple message for Kelly Oubre Jr. as the new Golden State Warriors swingman struggled to find his way early in the season. Curry wanted Oubre to be patient in his approach and continue to pick and choose his spots.

But most of all, the former two-time MVP wanted the 25-year-old to focus on what he could control even when his shot wasn’t falling.

“The one thing is you just got to block out the noise,” Curry said during a videoconference with reporters following Thursday’s 147-116 road win over the Dallas Mavericks. “Everybody’s going to critique every single thing, and if you ride that emotional roller coaster, you’re going to be in for a long year.”

Curry and his teammates have repeatedly defended Oubre, who is shooting 37.6% from the field this season, from criticism. It’s a loyalty that has defined the Warriors culture for years and a trust that was rewarded in a major way Thursday when Oubre poured in a career-high 40 points to lead an injury-depleted Warriors group to one of its more impressive wins of the season.

The Warriors have always believed Oubre was capable of these types of performances, and their small-ball lineup provided the perfect platform to produce when his team needed it the most.

“Obviously for Kelly, it’s been a rough first quarter of the season,” Warriors head coach Steve Kerr said. “And yet within that span, he’s had some excellent games for us. He’s played very well at times; he’s just had some really poor shooting nights during that span that people have locked in on, but Kelly’s getting more comfortable.

“Guys in the locker room love him and want to help him continue to get comfortable, and this was obviously a great night for him and for the whole group.”

Kerr’s point is underscored by the fact the Warriors became just the fifth team in the past 25 seasons to score at least 35 points in every quarter of a game, according to ESPN Stats & Information research. The Warriors scored 35 or more points in all four quarters of a game for the first time since Jan. 8, 1991, against the Denver Nuggets.

Oubre, who had scored 34 points combined over his past three games, including a stretch during the last four minutes of Tuesday’s loss to Boston Celtics in which he was pulled in favor of Kent Bazemore, played with the kind of confidence the Warriors have seen only in flashes this season. He hit seven 3-pointers Thursday, which is almost a third of the 24 3-pointers he had made all season going into the game.

“It’s honestly been a great learning experience for me,” Oubre said during a postgame appearance on NBC Sports Bay Area. “I take it back to me being a freshman in college again because it was more of a psychological change. I had the tools to take it to the next step, but mentally I had to slow myself and wrap everything [together] and find my flow. So I’m finding that gradually — so I’m really happy to play with a great player in Steph so that we can continue to push this mode forward.”

The offensive mode that unleashed Oubre’s best was fueled by veteran Draymond Green, who was forced to play a point-center role with big men James Wiseman (wrist), Kevon Looney (ankle) and Marquese Chriss (ankle) all out. Green’s 15 assists were just one shy of his career high and they were the fifth most by any player this season. Green became just the third starting center in history to dish out at least 15 assists in a game, according to Elias Sports Bureau data, joining Wilt Chamberlain and Nikola Jokic.

“People always look at scoring,” Warriors swingman Damion Lee said. “Draymond’s one of the best defenders in the game, and also one of the best playmakers. He’s always looking to find guys, to get guys shots. Whether he’s pushing it in the break, he gets a rebound, you guys have seen it time and time again. He’ll get the rebound and have that burst at half court and immediately just start surveying and seeing where the advantages are.”

Kerr noted he believes Green is “finding his rhythm” and was confident this type of play from him has been building over the past two weeks as Green continues to find his wind after missing training camp and the first four games of the season (COVID-19 protocols and a foot injury). With Green rounding into a familiar from and Oubre breaking out for his best game as a Warrior, Kerr and his players trust their team might be able to withstand the injuries that threaten to derail their inconsistent season.

As has been the case all season, Oubre and Green set a tone for the group that is easy to follow. When they play well, the Warriors usually win — when they don’t, the group has little chance. Curry wants Oubre to maintain that even approach as the young slasher continues to find his way.

“We don’t get too high on the highs and too low on the lows,” Curry said. “From the jump, coming into training camp, there was a lot to figure out on the fly.

“And there’s got to be a patience around it in terms of we’re not going to be perfect every night. When he doesn’t have good games and things kind of change from night to night, that he has to stay engaged, stay aware. … I think the biggest thing is that he can impact games with his energy and his defensive presence and discipline. And then offensively, that’s going to come with just more reps and understanding how we’re trying to execute on that end of the floor.”

Munawar Faruqui: Bail for jailed India comic who did not crack a joke