How Biden’s Labor Secretary could shake up the gig economy 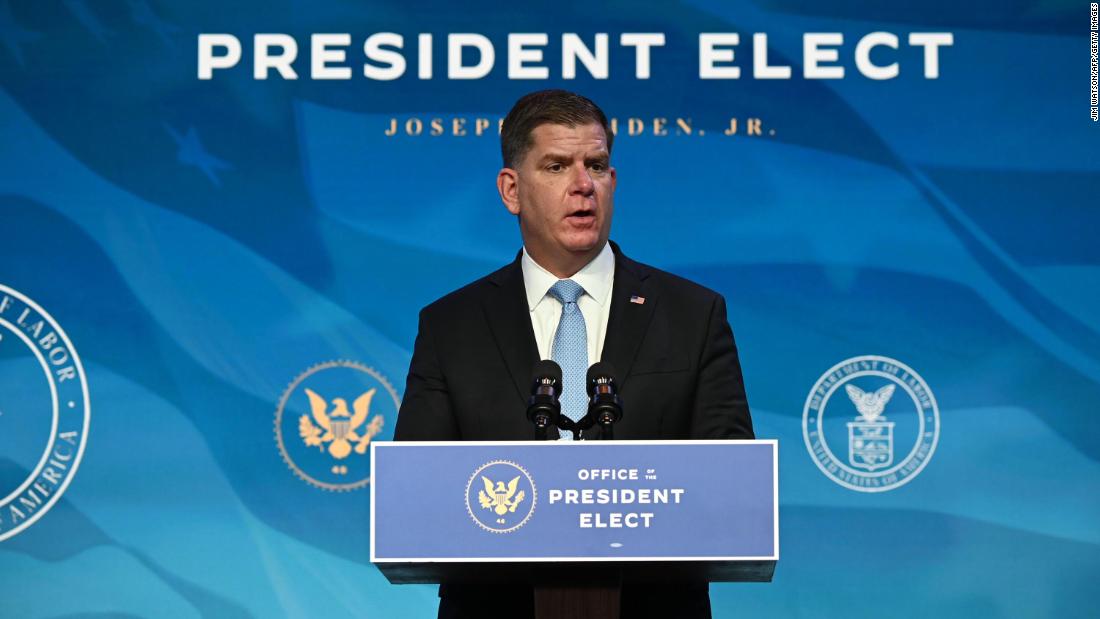 At the same time, these companies are pushing to defend a controversial business model, one in which they treat their workers as independent contractors rather than employees who would be entitled to traditional benefits and protections such as workers’ compensation, unemployment insurance, family leave, sick leave, or the right to unionize.

“Right now we are at a crossroads,” said Shannon Liss-Riordan, a Boston-based labor attorney who has been challenging Uber and Lyft over worker classification through various lawsuits for seven years. “If he rises to the challenge, Marty Walsh can have one of the biggest impacts on labor in this country since Frances Perkins,” she said, referring to Franklin D. Roosevelt’s Labor Secretary, who was the chief architect behind the New Deal.

While Walsh has yet to delve extensively into the issue of app-based gig worker classification, labor experts and friends who’ve known him professionally throughout his career say they are encouraged by his background advocating for workers in the construction field, which has long dealt with the topic of misclassification.

“In construction, when contractors started reclassifying their workers from employees to independent contractors, it was just a scam to save money,” said Mark Erlich, a fellow at the Harvard Labor and Worklife Program who formerly served as Executive Secretary-Treasurer of the New England Regional Council of Carpenters and who has known Walsh for roughly 20 years. “What’s different now is it’s no longer [viewed as] a ‘scam,’ it’s [positioned by the companies] as beautiful scheme — a new conception of work in which you are your own boss, have flexibility scheduling — it is actually seen as desirable.”

The companies have long defended their business model, which was popularized by Uber during the last recession, claiming that workers have more flexibility when treated as independent contractors than employees. But there’s nothing preventing companies from offering flexibility to employees. Rather, it is a business decision — and one that critics say exploits workers in an effort to keep costs low for the companies.

In statements, a Lyft spokesperson said the company looks forward to working with Walsh and the new administration “to strengthen opportunities for app-based workers.” An Uber spokesperson echoed the sentiment, while stating it “supports efforts to ensure worker independence, while providing drivers and delivery people with new benefits and protections.”

Instacart and DoorDash pointed CNN Business to a spokesperson for the App-Based Work Alliance which is a coalition backed by Uber, Lyft, Instacart, DoorDash and Uber-owned Postmates.

“Our country’s independent workforce has been essential in helping our communities overcome the many challenges we’ve faced throughout this pandemic. We are looking forward to working with the Biden-Harris Administration, including the Secretary of Labor, to address the rapidly evolving needs of the 21st century workforce,” said Whitney Mitchell Brennan, a spokesperson for the App-Based Work Alliance in a statement to CNN Business. “We encourage Mayor Walsh to commit to promoting federal policies that will support the growing on-demand economy.”

Erlich said Walsh has “very strong instincts” about working people and working families. Walsh, the son of Irish immigrants, joined a union when he was 21 and later went on to earn his Bachelor’s degree while working as a legislator. For several years while in that role, he served as head of the Boston Metropolitan District Building Trades Council, an umbrella group of local unions, before becoming Boston’s mayor in 2014, a position he held when tapped by the Biden administration.
As mayor of Boston, Walsh made clear he saw a role for government in regulating gig companies, recently pushing for new fees on Uber and Lyft rides to encourage shared rides and decrease congestion. He’s also been critical of how services like DoorDash and Instacart are at times inaccessible to certain neighborhoods.

Representatives for Walsh and the White House did not respond to requests for comment. Walsh’s nomination as Labor Secretary is pending Senate approval. At his confirmation hearing Thursday, Walsh spoke of pivotal moments in his life — from having cancer as a child, to following in the footsteps of his father’s union job and recovering from addiction — that have informed how he views the work of the Department of Labor.

“Workers’ protection, equal access to good jobs, the right to join a union, continuing education and job training, access to mental health and substance use treatment. These are not just policies to me, I lived them,” Walsh said. “Millions of American families right now need them. I’ve spent my entire career at different levels fighting for them.”

Walsh wasn’t questioned about his stance on gig worker classification, but he did indicate some support for the PRO Act, legislation that was reintroduced by Democrats Thursday and would significantly alter existing labor law and make it easier for workers to unionize. “That is one step towards helping people organize freely. I do believe in the right of organizing. I do believe in the right of people being able to join a union, if they want to join the union. So, I certainly support that,” said Walsh.

The PRO Act would have implications for the gig economy, as it would implement an “ABC” test — which the gig companies fought against in California — for determining if a worker is an employee or contract worker, if passed.

Walsh’s Department of Labor can make a significant impact on worker classification not only by interpreting existing laws and using the office as a bully pulpit, but also through directing and coordinating enforcement action against employers who may not be following laws, according to labor experts.

Joanne Goldstein, who has known Walsh for 15 years through various jobs of hers such as the head of the Massachusetts Attorney General’s Fair Labor Division and as the state’s Secretary of Labor and Workforce Development, said he cares most about workers having access to social and economic safety nets.

“We had a number of situations where he’d approach me in my capacity to see what we could do in the context of the law to help workers have the wages, benefits, safety and training that workers deserve,” Goldstein told CNN Business.

Given the current economic downturn, the issue of gig worker classification may not be the first priority on Walsh’s list. But as Becki Smith, a director of work structures at the National Employment Law Project, notes, “It is urgent that they be very clear about their interpretation of the law very quickly.”

“The first order of business is going to be to erase Trump policies that very radically reinterpreted who among us gets access to basic legal protections,” Smith said. Much of that can be done administratively without changes in the federal law, Smith added.

The stance under former President Donald Trump’s Department of Labor favored employers, as relayed in a 2019 advisory memo and a rule squeezed in during the final days of the Trump administration. The latter clarified the standard of employment under the Fair Labor Standards Act, which establishes baseline standards like minimum wage and overtime for employees, to make it easier for companies to classify their workers as independent contractors.
Both Biden and Vice President Kamala Harris have signaled some opposition to the gig companies on this issue. They called for “no” votes on Prop 22, and campaigned on a platform that included putting “a stop to employers intentionally misclassifying their employees as independent contractors” and ensuring workers in the gig economy “receive the legal benefits and protections they deserve.”

Still, the coalition backed by Uber, Lyft, DoorDash and Instacart wasted no time in issuing a statement on Inauguration Day to congratulate Biden and Harris while pushing its agenda for “modern policies” that will give workers “access to benefits, while protecting their flexibility to earn independent income on their schedule.”

To really make a mark on the issue, Walsh will have to take on “the entrenched folks out of Silicon Valley,” said Erlich. Among that group are former Obama administration officials who are now in key roles at gig companies such as Lyft’s chief policy officer, Anthony Foxx, and Lyft board member Valerie Jarrett. Uber’s chief legal officer, Tony West, served in the Justice Department for the Clinton and Obama administrations and is Harris’ brother-in-law.

As Liss-Riordan, the Boston-based attorney, put it: “This could be an extremely significant position and there are a lot of people putting very high hopes in Marty that he does what needs to be done.”