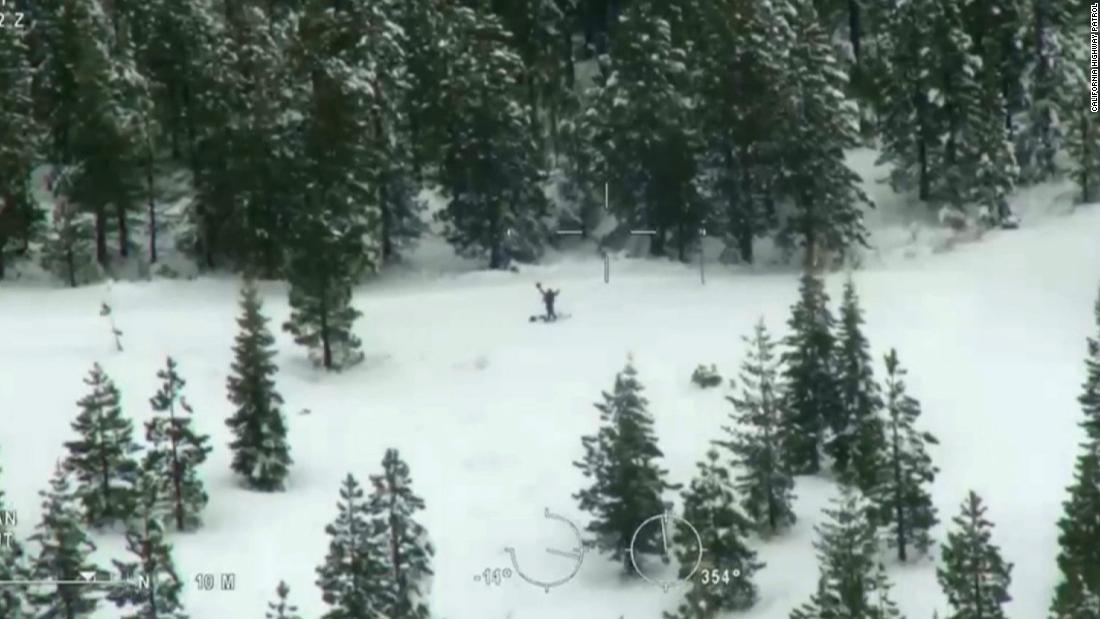 Harland Earls, 29, was traveling from Grass Valley to Truckee for a birthday party on January 24, a drive that would typically take less than two hours, when a heavy snowstorm shut down Interstate 80. Seeking an alternate route, Earls turned to his GPS, according to the Sierra County Sheriff’s Office.

The device directed Earls to the shortest route on the map. But the GPS didn’t account for Henness Pass Road being an unplowed mountain pass and Earls ended up being stuck for days in snow so deep he was unable turn his vehicle around, the sheriff’s office said.

“The GPS doesn’t know if there’s six feet of snow on a road or if the road is clear and passable,” Sierra County Sheriff Mike Fisher told CNN.

Stuck and unable to obtain a cell phone signal, Earls tried tying small branches to the tires of his pickup truck to gain some traction, his mother, Julie Earls told CNN. In the process, his cell phone got wet and stopped working. The resourceful man found some dry spaghetti noodles and handwarmer packets in his truck, and popped them into a Ziploc bag with his phone. It took three days, but the phone finally dried out enough to for him to charge it and make a call. But finding cell service wasn’t as easy.

While Earls survived on two cans of beans, some sausages and a few pieces of stale, moldy bread, the man’s family reported him missing and assembled search parties to hunt for him. Law enforcement was alerted and various agencies were on the lookout for Earls and his pickup truck.

The sheriff’s office said that Earls’ pickup truck had a camper that provided some shelter and he had winter clothing and some propane for a camp stove.

In the meantime, another storm moved through the region, dumping even more snow, his mother said

Yet she wasn’t about to give up on finding her son.

“I will not wait until spring to find his body. I will find him now if I have to go out there myself,” Julie Earls said, noting that her son had always been interested in survival skills and that as a boy, she would often find him reading a survival skills book with a flashlight in the middle of the night.

Earls was able to cut wood for a fire, and used a small propane camp stove to melt snow into drinking water, which he drank out of a small dog dish. He tried hiking out a few times, but couldn’t make it far enough to find a cell phone signal as he kept sinking into the deep snow. He had now been stuck for seven days

“And then on Sunday (January 31), he really was desperate and he was out of provisions and … his phone was finally charging up to at least 50%,” his mother said. “So it gave him the chance to hike up to the highest point.”

Earls strapped two snowboards to his feet to use as makeshift snowshoes to hike to a place where he could get cell service. The connection was bad and the call quickly dropped, but it lasted long enough for him to give the 911 operator his name and birth date.

Law enforcement was able to pinpoint the GPS location of his phone and launched ground search and rescue teams as well as a helicopter. After scouring the area, the California Highway Patrol helicopter crew located him “almost immediately,” Fisher said.

His mother said Earls declined any medical attention once he was rescued.

“He just wanted to get home. He was hungry, cold and tired, very weary as I met him at the sheriff’s station,” she said.

“I’ve been feeding him all of his favorite foods and vitamins and rehydrating,” she said. “He drank probably a gallon of water the first day that he got here.”

Jordan Spieth’s confidence is building, but is his game finally ready to win again?