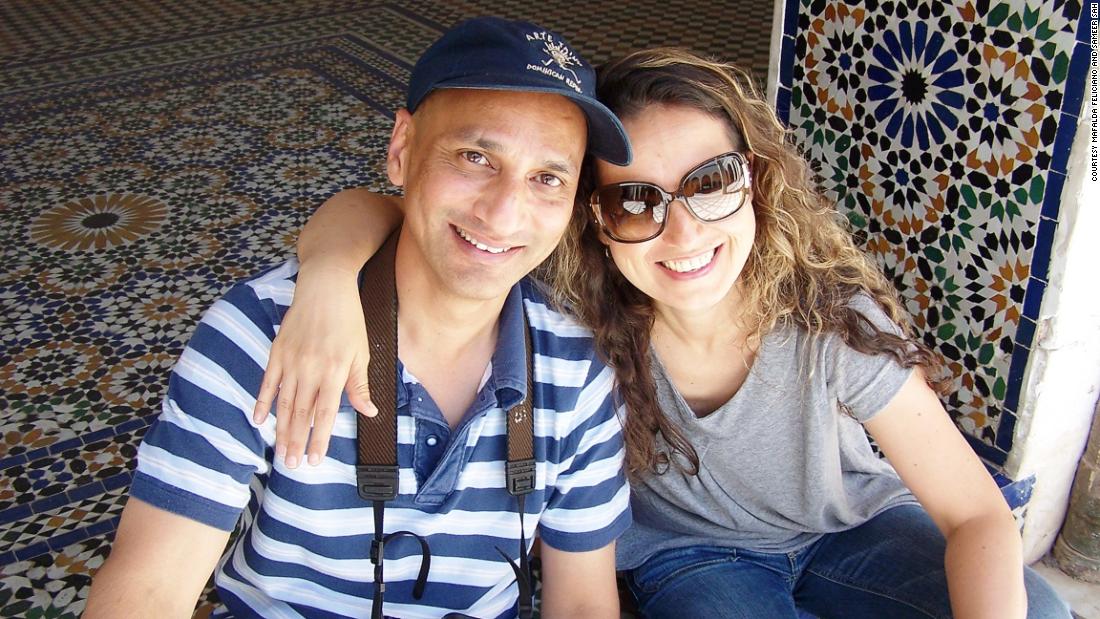 
(CNN) — If everything had gone according to plan, they would probably never have met. But Mafalda Feliciano’s original British Airways flight from Brazil was overbooked, so she was bumped on to another — and then fate played its hand.

Traveling with her sister and brother in law for a vacation in Egypt in September 2004, the group was re-routed via London.

After they lost their original seats, Feliciano ended up on her own, in the middle of a row, between two strangers.

By her own accounts, Feliciano, a then-37-year-old medical physicist from Brazil, is naturally shy and introverted. She had no intention of making conversation with the passengers on either side of her. Instead, she settled in for a quiet flight across Europe.

About two hours into the journey, bored of napping, Feliciano went to turn on the inflight entertainment. She reached for what she thought was her remote, built into the armrest, and hit the on-button.

It was the wrong remote. She’d accidentally turned off the screen belonging to the guy in the window seat next to her.

“He was like, ‘Excuse me, but I was watching a movie and you just stopped my movie,” she recalls. Embarrassed, Feliciano apologized. “Oh, I’m sorry, sir,” she said.

Laughing at the formality of her apology, he replied: “I haven’t been knighted by the Queen.”

The window seat passenger was Sameer Sah, a 38-year-old, Indian-born Londoner who worked for an international charity. He was a frequent BA flier and — as he jokingly puts it — “basically threw a tantrum at the airport and said, ‘No, I want a window seat.'”

It was kind of his fault that Feliciano and her family had ended up sat in different rows.

Sah was taken with Feliciano right away: “She was pretty,” he says. He thought she looked much younger than her 37 years.

As for Feliciano, she wasn’t fluent in English at the time, so not all his jokes landed, but she knew she enjoyed his company.

When the flight started to descend over Cairo, Sah hedged his bets. He asked Feliciano if she’d like to get dinner together during her week in Egypt.

Feliciano hesitated, she was keen, but this wasn’t how she’d envisaged this vacation going.

She was recently divorced, and, in a strange coincidence, she’d actually met her first husband on an airplane, on an internal flight in Brazil.

What were the chances of another romance beginning in the air, and would this one work out?

Mafalda Feliciano and Sameer Sah in Cairo, Egypt, right after they met in 2004.

Right before Feliciano set out for her Egypt vacation, a friend had offered to do a tarot card reading.

Feliciano didn’t believe in fate, or divination, but she indulged her friend anyway.

She recalls her friend shuffling the cards and then looking at her, knowingly.

“She said, ‘The cards are telling me you’re going to meet someone on this trip.'”

Feliciano just laughed in response. “I’m not going to meet anyone,” she insisted.

Now here she was, making an unexpected connection on a flight before she’d even touched down in Cairo.

Feliciano agreed to dinner with Sah, but requested that her sister and brother-in-law accompany them.

She hastily explained the situation to her family when they were reunited at Cairo Airport.

“They were like, ‘You just met him on the flight, but he’s coming for dinner?’ They were a bit shocked.”

But the evening was a success. “We had a very good time, all of us together,” says Feliciano.

The couple, pictured right, with Feliciano’s sister and brother-in-law in Cairo, Egypt in 2004.

The group ended up spending most evenings together. Sah would work during the day and Feliciano spent her time touring the city’s sites with her family.

Then, in the evening, the couple met for dinner — at first with Feliciano’s sister and brother-in-law in tow, then later, on their own. They also did some sightseeing altogether, including to the pyramids of Giza.

The connection didn’t fizzle out when the week ended. Feliciano and her family moved on to the next leg of their vacation in Istanbul, but she continued to chat to Sah on the phone most nights.

Before long, he visited her in Brazil and they decided to begin a long-distance relationship.

The couple embarked on a long-distance romance, meeting across the world. Here they are in Marrakesh, Morocco.

Feliciano says her friends were astonished — a few joked they should start flying more.

But her friend who’d read the tarot cards just said she’d told her so.

Over the next couple of years, Feliciano and Sah met every three months or so for two-week vacations. They reunited in London, Brazil, Brussels, the Netherlands, New York, and the Dominican Republic. Both love to travel and say exploring the world with one another was an unforgettable experience.

But as the two-year-anniversary of their fateful airplane meeting rolled round, the couple had reached a deadlock.

“Either we split up or we get married.”

As fun and as glamorous as it was to travel together, it was hard being apart from one another in-between.

Plus, it was expensive, Sah says he was racking up credit card debt.

The couple decided to go all in — they’d get married, and Feliciano would move to London.

Their wedding celebrations took place in Brazil. A night to remember, lasting until the early hours of the morning.

“A big party, a lot of drinking,” laughs Sah.

Feliciano and Sah settled in London after two years of meeting on vacation, including on a train to Casablanca, Morocco, pictured here.

After the exhilaration of the wedding and the whirlwind romance of the last few years, the reality of their decision sunk in.

Some of Feliciano’s friends had told her relocating for love was a mistake — she was leaving an established job in Brazil.

“My boss said, ‘I’m sure you’re going to be back after a month, your job is here,'” says Feliciano.

Sah’s friends were excited for him, but the situation with his family was difficult. He was also divorced, with two children, and his parents and siblings refused to recognize Feliciano as his wife.

Within two months of arriving London, Feliciano got a job at a hospital, but it was a lower rung on the ladder than she was used to.

She’s since risen the ranks and is now Head of Brachytherapy Physics at Colchester General Hospital, southeast of London, where she treats cancer patients.

The couple also had to adapt to living together full time.

“There were a lot of problems in the beginning,” says Feliciano.

“It took us, I think, a year, to calm down. It was two different people, two different cultures — completely different as well — living under the same roof.”

Sah was frustrated that he had to do all the cooking, and Feliciano wasn’t a fan of Sah’s dishes.

Plus, Feliciano was dealing with the stresses of living in a new country and attending language classes.

A recent photo of Feliciano and Sah with their dog, Ziggy.

But after a year of being at odds, the couple sat down and talked candidly about their relationship and its future.

“We reached a point when we thought it wouldn’t work out at all,” says Sah. “But then we sat down, spoke, then made an effort — both of us — and turned our lives around. And here we are after 16 years.”

Now the two live happily in the historic town of Colchester, in the southeast of England with their dog, a cocker spaniel called Ziggy who Feliciano calls their “beautiful boy.”

Feliciano, who used to be suspicious of serendipity, now thinks their meeting was fate.

“I think it was meant to be,” she says. “Me, a person from South America, meets a person from India, flying over Europe, going to Africa.”

But right now, with flying curtailed and social distancing and mask-wearing the norm, it seems very unlikely two strangers on a plane would strike up a conversation and make a connection.

It’s been a surreal year for Sah and Feliciano. She’s continued to work in the hospital during the Covid-19 pandemic, treating cancer patients with radiotherapy and trying to stay safe.

Meanwhile, the tuberculosis charity Sah had been working with for the last few years folded last year, and he’s now working as a freelance consultant.

“First of all, it’s a belief in the other person,” says Sah. “And secondly, there’s a lot of perseverance. If you want to make things work, there is never an easy part. You really have to work hard to make it work.”

How Biden’s Labor Secretary could shake up the gig economy