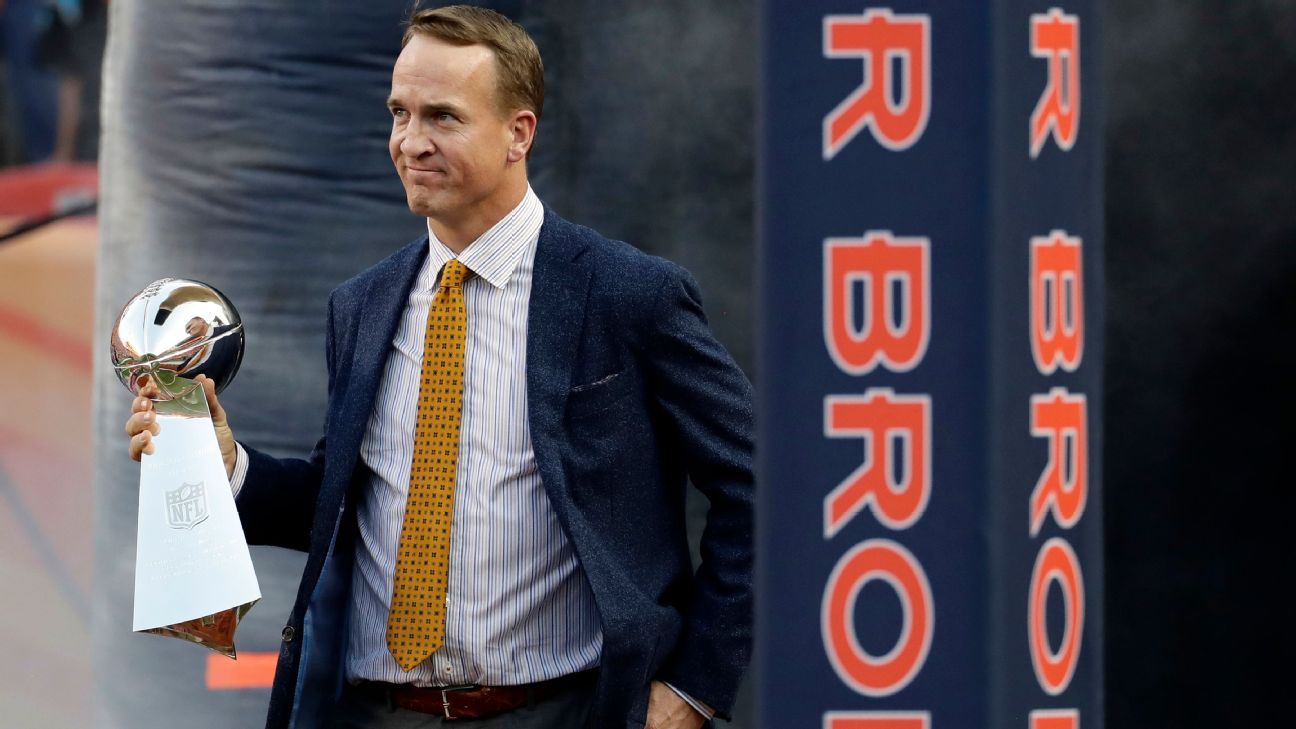 
Quarterback Peyton Manning added the last, and perhaps only missing, entry to his NFL résumé Saturday night when he was named as one of eight new enshrinees to the Pro Football Hall of Fame in Canton, Ohio.

Manning, who was in his first year of eligibility, played on two Super Bowl-winning teams, was a five-time MVP, a 14-time Pro Bowl selection, a former Offensive Rookie of the Year and Comeback Player of the Year.

Manning, Woodson and Johnson were all in their first year of eligibility. They combined for 29 Pro Bowl selections, and Woodson was the league’s Defensive Player of the Year in 2009.

Among the modern-era finalists, Lynch, who had been a finalist eight times, has waited the longest for enshrinement.

Also included in the Class of 2021 is former Dallas Cowboys wide receiver Drew Pearson, who was elected as a senior inductee, and former Steelers scout/personnel executive Bill Nunn, who will be posthumously enshrined in the contributor category. Former Raiders and Seattle Seahawks coach Tom Flores, the lone finalist in the coach category, is also bound for Canton.

This marks the third time in the past four years that three first-time eligible players have been selected for enshrinement in the same year. Champ Bailey, Tony Gonzalez and Ed Reed were enshrined in 2019 as first-time eligible finalists, as were Ray Lewis, Randy Moss and Brian Urlacher in 2018.

The Class of 2021 was chosen Jan. 19 by the Hall’s board of selectors during a virtual meeting. The eight new Hall of Famers will be enshrined during a multiday event Aug. 5-9 in Canton. The extended enshrinement weekend will also include ceremonies for the Hall’s Class of 2020, as well and the Centennial class of Hall of Famers selected as part of the league’s 100th anniversary. Both were canceled last year because of COVID-19 restrictions.

After 14 seasons with the Indianapolis Colts, Manning signed with the Broncos in 2012 — making him one of the most accomplished players to change teams in the free-agency era. The Colts had 11 10-win seasons with Manning at quarterback and won Super Bowl XLI, with Manning earning MVP honors.

“It’s almost an impossible task to put into words what Peyton Manning has meant to the Colts, the NFL, the city of Indianapolis, the state of Indiana, and fans across the globe,” Colts owner Jim Irsay said in a statement. “His preparation, performance, and success on the field were legendary and speak for itself. Books have been and will continue to be written about the impact he and his family have made in all aspects of sports and life.

“As one of the best to ever play, Peyton is rightfully credited for revolutionizing and mastering the quarterback position, the most important position in all of sports. There have been many greats to play the game, but few had the absolute command of the field as Peyton did. Simply put, he changed the way quarterbacks play the game, and every quarterback since has learned from watching him.”

The Broncos won Super Bowl 50 to close out the 2015 season — the last game of Manning’s career — and complete a four-year run in Denver that saw the team win 50 games and four consecutive AFC West titles. Manning retired with numerous single-season and career records, including his 5,477 yards passing and 55 touchdowns in 2013.

Woodson was a nine-time Pro Bowl selection and finished his 18-year career tied for fifth in interceptions, with Ken Riley, with 65. He led the league in interceptions with nine for the Packers in 2009, and earned a Super Bowl ring with Green Bay the following season.

The cornerback-turned-safety also forced 33 fumbles in his career, recorded 20 sacks and had three 90-tackle seasons, including 113 tackles with the Raiders at age 38.

Johnson played nine seasons for the Lions before abruptly retiring following the 2015 season, when he had 88 catches for 1,214 yards and nine touchdowns. He retired in part due to injuries that plagued him throughout his career — fingers bent in different directions and an ankle injury so bad and that lingered for so long it almost forced him from the ‘Dancing with the Stars’ competition in 2016.

Because of the Lions’ struggles — something he later said contributed to his retirement — Johnson played in only two postseasons. He finished with 211 receiving yards and two touchdowns in his first postseason appearance, a 45-28 loss to the New Orleans Saints in the NFC wild-card round that followed the 2011 season.

Johnson recorded five 1,200-yard receiving seasons and ranks 31st in career receiving yards. He finished his career as Detroit’s leader in targets (1,312), receptions (731), yards (11,619) and receiving touchdowns (83). His 84 total touchdowns are second in Lions history behind Hall of Fame running back Barry Sanders (109).

“The culmination of all the work, all the grind, all the ups-and-downs that you’ve been through, just to be able to excel at the level and be able to have the opportunity to be among such greats, I’m sleeping with a smile tonight,” Johnson said on the NFL Honors broadcast when told of his election.

Johnson, 35, will be the third player inducted into the Pro Football Hall of Fame at age 35 or younger, along with Gale Sayers and Jim Brown.

Lynch, a versatile, smart and punishing player over the course of his career, was a nine-time Pro Bowl selection, including his last four years in the league, which he spent in Denver and helped the Broncos come a game from the Super Bowl in 2005. He had eight 80-tackle seasons, including 84 tackles in 2006 at age 35, to go with three seasons with over 100 tackles. Over his last 11 seasons, he played on only two losing teams, and was a catalyst behind Tampa’s Super Bowl title in 2002.

Faneca was a nine-time Pro Bowl selection and is one of 12 guards in NFL history to be named first-team All Pro six or more times — he was first-team All Pro six times, a streak that was only broken when the Steelers needed him to move to left tackle for much of the 2003 season because of injuries to other players. In 10 seasons with Pittsburgh, two with the New York Jets and one more in Arizona, Faneca missed a grand total of one game. His best days came with the Steelers, who had a top-10 rushing attack in all but one of his seasons there, and won the Super Bowl in 2006.

Pearson was the only first-team selection to the All-Decade team of the 1970s who had not previously been enshrined in the Hall of Fame. A former college quarterback who made the Cowboys’ roster as an undrafted rookie wide receiver, Pearson was one of the elite of his era. His career was shortened by a liver injury he suffered in a car accident at age 33.

Nunn was a scouting pioneer, who began advising NFL teams on players from the nation’s Historically Black Colleges and Universities he had evaluated as a sports writer. Nunn later spent more than four decades with the Steelers, and was a key figure in the team’s dynastic run in the 1970s and return to the Super Bowl in the decades that followed. He died in 2014.

Flores won Super Bowl rings as a player, assistant coach and head coach to go with an AFL championship as a player. Flores and Hall of Famer Mike Ditka are the only people in NFL history who have been Super Bowl winners as players, assistant coaches and head coaches. His nine seasons as Raiders coach included two Super Bowl victories, an 8-3 postseason record and a playoff winning percentage of .727, which ranks behind only Vince Lombardi.

Jacksonville Jaguars left tackle Tony Boselli and Miami Dolphins linebacker Zach Thomas were among the finalists whose names were not called.