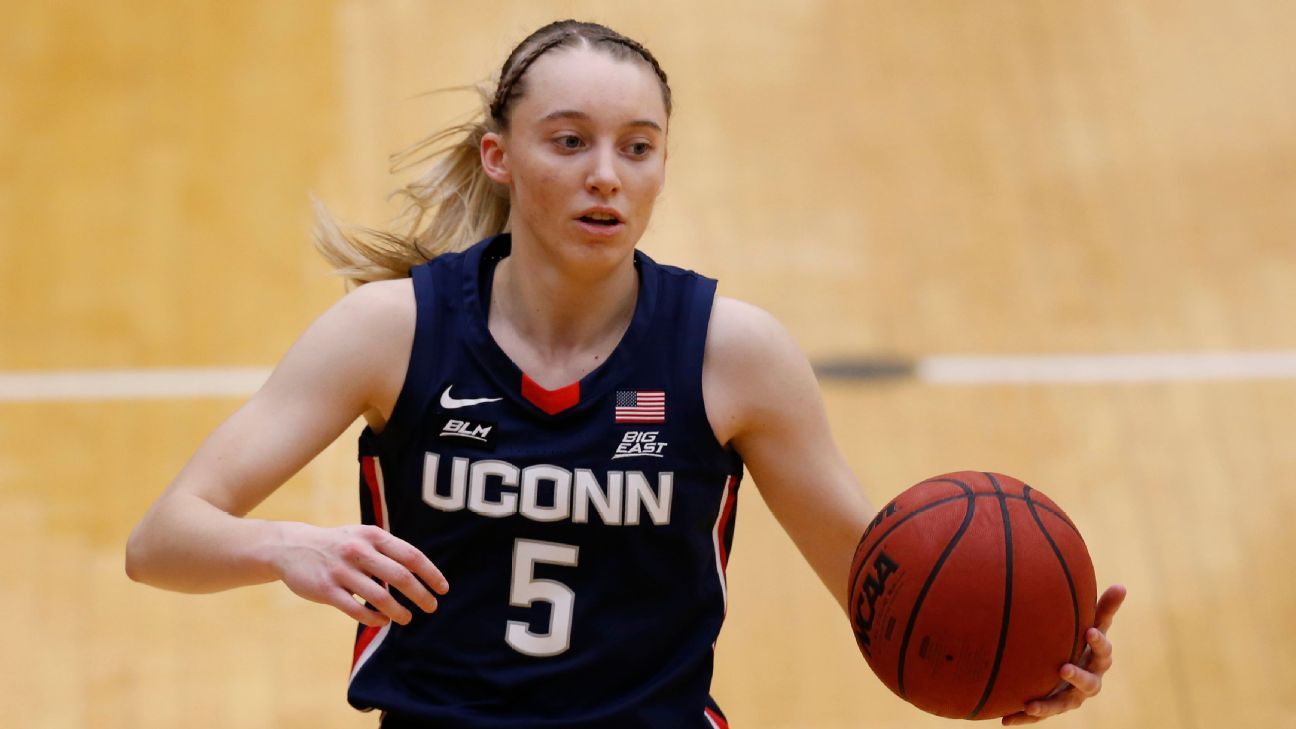 UConn women’s basketball coach Geno Auriemma is known for his caustic motivational quips, but he was fresh out of them after Friday’s 87-58 victory at Marquette. Auriemma called the game “one of the best things we’ve done this year; I’m pretty proud of them.”

And he had extra praise for freshman guard Paige Bueckers, saying, “She’s being Paige. She’s being about as good a player as there is in the country right now.”

Bueckers is believed to be the first freshman in UConn history to record back-to-back games of 30 points or more. After scoring 32 in Wednesday’s victory over St. John’s, Bueckers had 30 against Marquette for the No. 3 Huskies. She’s the only UConn freshman to do it in the last 20 years, and one of five overall from UConn in that stretch to have back-to-back games of 30 points or more, joining Napheesa Collier, Katie Lou Samuelson, Maya Moore and Tiffany Hayes.

“Paige spent the earlier part of the season just trying to feel things out,” Auriemma said. “Lately, she’s been more kind of directing what we’re doing. And instead of kind of following a little bit, I think she’s pushing and leading. This is what we see every day in practice. And I’ve been seeing it since September.”

Then Auriemma joked, “When she shoots and it doesn’t go in, she gets yelled at. Like, ‘What’s your problem?’ We think they’re all going in.”

The 5-foot-11 Bueckers is somewhat slight of build, and said she knows opponents see that and try to be extra physical with her. When UConn faces No. 2 South Carolina on Monday, the Gamecocks will do their best to slow her down.

“I do have that skinny build, and people are gonna want to try to push me around and knock me off of my game,” Bueckers said. “So I try to take pride in knowing they’re going to be physical with me, so I just have to stay grounded.”

Bueckers is one of seven freshmen on the UConn roster, including Saylor Poffenbarger, a 2021 recruit who joined the team in January and scored her first points Friday with a 3-pointer against Marquette. Along with Bueckers, freshman Nika Mühl started Friday and finished with eight points, seven rebounds, nine assists and five steals. Auriemma said he’s seeing great effort out of his rookie class, led by Bueckers.

“The energy that the freshman have is pretty high-level,” Auriemma said. “It’s unusual at times to get freshmen to understand how hard they have to compete. But they know how hard they have to compete. They have a way about them that allows them to play through things. They have real short memories. They just go out and try to make the next play.”

Washington State pulls off the stunning upset over No. 5 UCLA 67-63.

But UConn isn’t the only school that is seeing a surge from its freshmen; there are many across the country. Iowa guard Caitlyn Clark had her fifth game with 30 or more points on Thursday, and she’s second in the Big Ten in scoring at 25.6 PPG.

Joining Bueckers with big nights on Friday were freshmen Charlisse Leger-Walker of Washington State and Cameron Brink of No. 6 Stanford. Leger-Walker, a guard from New Zealand, had 28 points to lead the Cougars to a 67-63 upset of No. 5 UCLA, the highest-ranked opponent Washington State has ever beaten. Leger-Walker is averaging 18.6 points, third in the Pac-12 in scoring.

Brink, a 6-4 forward, is one of many weapons on a deep Stanford team, but she was an essential player in the Cardinal’s 62-54 victory over Colorado, avenging a loss in Boulder in January. In Stanford’s first home game at Maples Pavilion since November because of COVID-19 restrictions, Brink had 13 points, eight rebounds and six blocked shots.