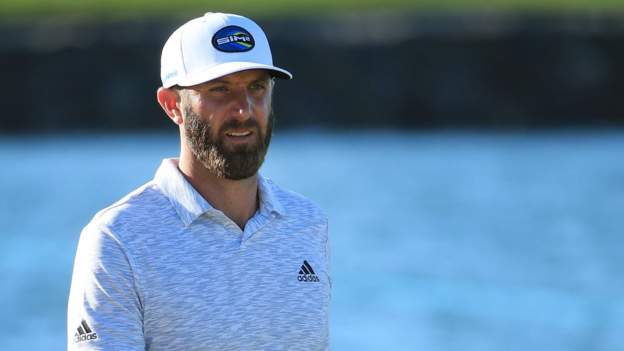 
World number one Dustin Johnson takes a two-shot lead into the final round of the Saudi International after posting a four-under-par 66 on Saturday.

Johnson, 34, produced consecutive birdies on the 17th and 18th holes to go 13 under and move clear of France’s Victor Perez who shot a bogey-free 66.

Englishmen Tyrell Hatton and Andy Sullivan are in a group of four who sit in joint third, all on 10 under.

Scotsman Stephen Gallacher shot two over and dropped from first to 14th.

“It’s always good to win no matter when it is. It’s a really good field. I’d definitely be very pleased,” said Johnson, who won the inaugural Saudi International in 2019.

The Masters Champion picked up four birdies in his opening 10 holes but then dropped his first shots of the tournament on the par-four 13th after finding the water, before atoning for the double bogey with his late birdies.

Sergio Garcia shot 64, the lowest round of the day, enough to lift the Spaniard into a group of seven on nine under, alongside the likes of England’s David Horsey, who equalled the course record of 61 on day one.

American Bryson DeChambeau is among those on seven under after a 68 in round three.

Players have defended their participation in the Saudi International following criticism from human rights groups who say the country is using sport to bury its human rights record.