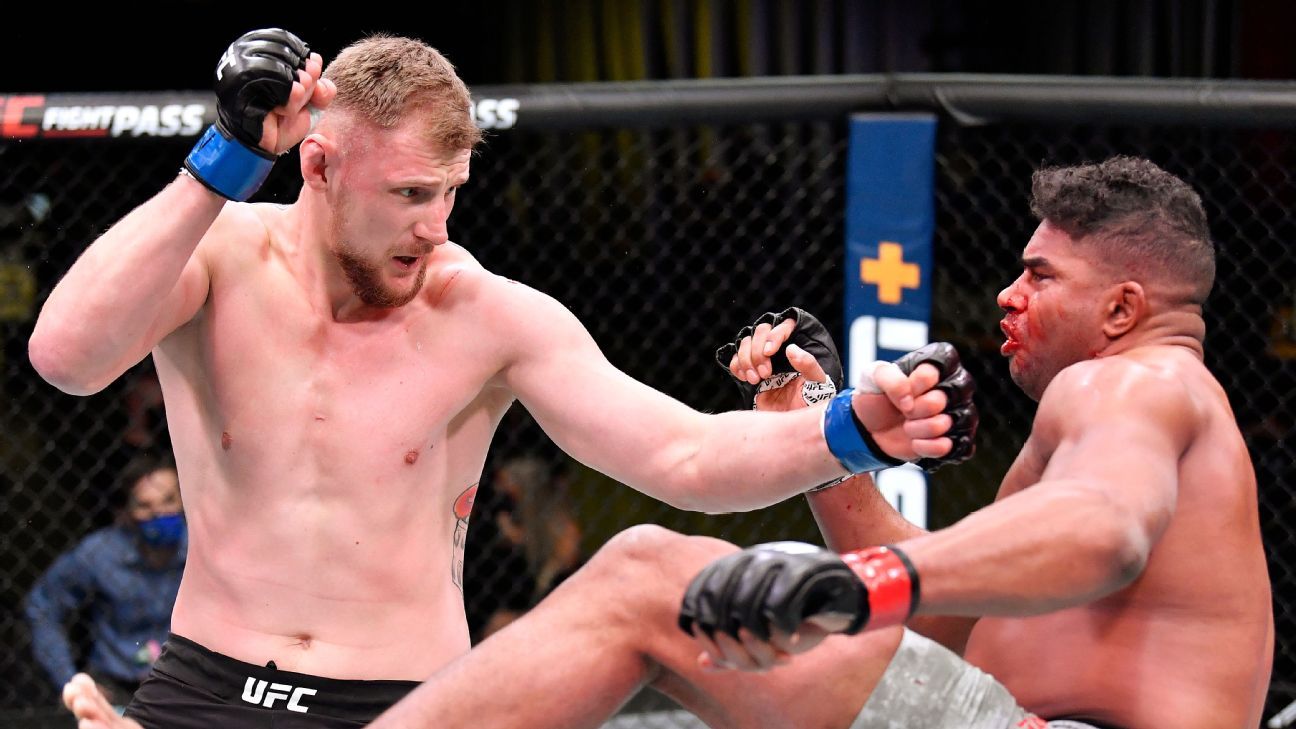 
Alexander Volkov has been on the cusp of ascending into the heavyweight elite for several years. He has been missing only that one big, signature finish.

He got it Saturday night.

Volkov took out legend Alistair Overeem via TKO at 2 minutes, 6 seconds of the second round in the main event of UFC Fight Night in Las Vegas. After bloodying Overeem with hard combinations, Volkov landed a walk-off left hook that floored Overeem for good. Referee Jason Herzog jumped in and called off the bout.

The victory was one-sided and perhaps Volkov’s best performance in the UFC, and it should elevate him into the upper echelon of the heavyweight division. ESPN had Overeem ranked No. 6 in the world at heavyweight with Volkov right below him at No. 7.

Overeem had success in the first with several hard overhand lefts. But waiting to counter Volkov was a miscue. Volkov came forward landing hard, straight punching combinations with Overeem shelling up along the cage. Though Overeem was blocking, Volkov’s shots were hard and getting through. Overeem was cut late in the first round.

In the second round, Volkov pressured Overeem against the cage again and landed hard jab-cross combinations. The technique was simple but very effective. Volkov’s heavy hands bloodied Overeem even more.

When the two separated, Overeem’s face was almost entirely red. Volkov then landed a perfectly placed left hook to send Overeem to the canvas.

“I felt like I can finish him in the second or third round,” Volkov said. “I saw his face. He had a lot of cuts and blood on his face. I was waiting for a good punch. I did it.”

The bout was held in front of no fans with COVID-19 protocols in place at the UFC Apex, a venue across the street from the UFC’s corporate campus. It was the first UFC event of the year in the United States after the first three took place in Abu Dhabi.

Volkov (33-8) has won nine of his past 11 fights. He was coming off a second-round TKO over Walt Harris in October and is on a two-fight winning streak.

Volkov, 32, is the former M-1 Global heavyweight champion and has been a perennial contender in the UFC. Before Saturday, he had failed in previous attempts to beat contenders Curtis Blaydes and Derrick Lewis.

Overeem (47-19, 1 NC) had won two straight and four of his past five coming in, hoping for one last run at the UFC heavyweight title. The Dutch striker is one of the most accomplished fighters in MMA heavyweight history. He’s a former Strikeforce and Dream heavyweight champion and one of only two fighters to win titles in MMA and K-1 kickboxing.