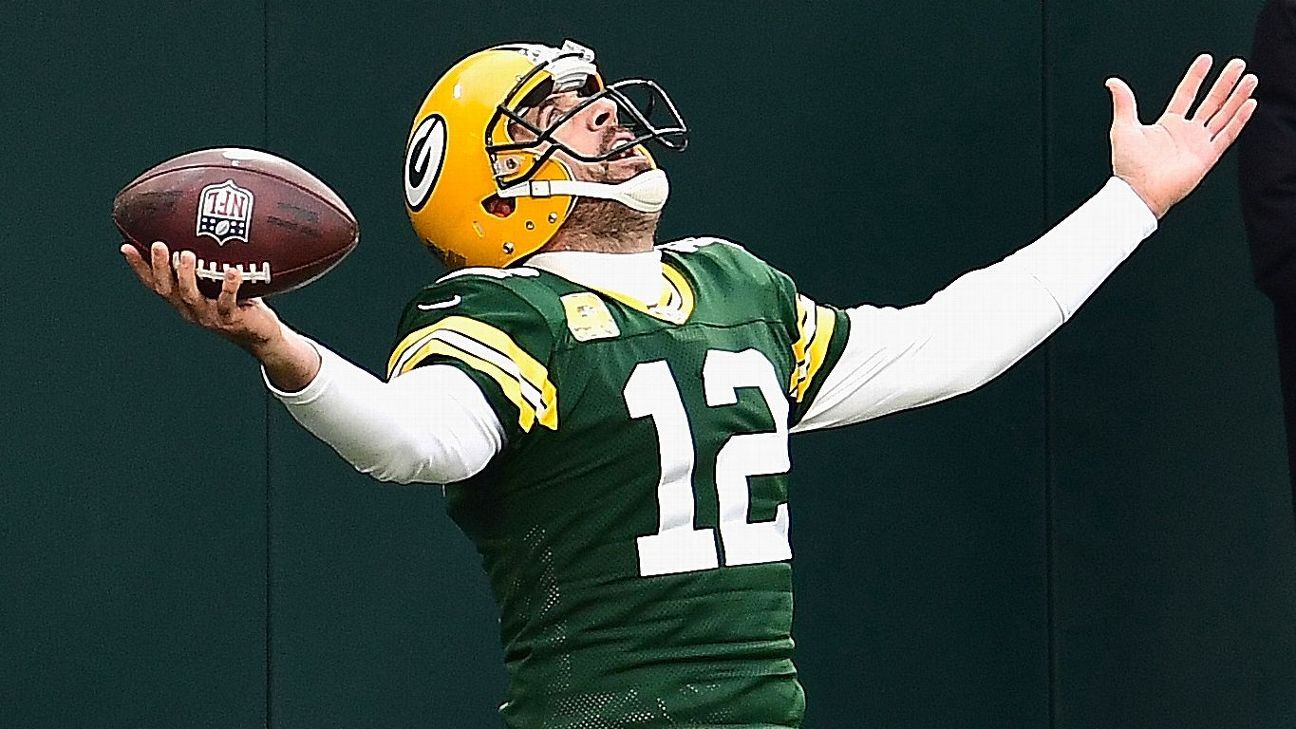 “It’s an honor to win this award for the third time,” Rodgers said in a prepared video acceptance speech. “2020 was definitely a crazy year filled with lots of change, growth, some amazing memorable moments, 180 straight days of having my nose hairs scraped, playing for very little fans or no [fans] the entire season. I got engaged, and I played some of the best football of my career. “

For Rodgers, it all started with an old film clip and one throw in training camp that told Rodgers he was back on track.

As the 2020 NFL season progressed, he revealed the two things that turned his 16th season into his third MVP award: a route he called a “read-stop” to Marquez Valdes-Scantling in training camp combined with a 2010 clip of his throwing motion.

Forty-eight touchdowns and five interceptions later, Rodgers led the Packers to a 13-3 record.

Rodgers became the third player in NFL history to lead the league in passing touchdowns while throwing the fewest interceptions, according to Elias, joining Tom Brady in 2010 and Johnny Unitas in 1958. Rodgers set a career high with an 84.4 Total QBR, the third-highest mark in a single season since ESPN began the metric 15 years ago.

He joined Brett Favre, Jim Brown, Brady and Unitas as three-time winners — all second most behind Peyton Manning’s five MVPs.

And it all started for Rodgers in August.

First, it was the throw to Valdes-Scantling, something they had been working on virtually all offseason as a key part of Green Bay coach Matt LaFleur’s offense that never got going in their first season together, 2019.

“That, to me, gave me a lot of confidence that the things I was thinking about and working on and visualizing could come to fruition,” Rodgers said in December, when he first revealed one of his secrets to this season. “Now you never know once the live bullets start going how you’re going to play, but I think as far as training camp goes, that was an important day for me. And a lot of things changed for me as far as my balance, my rhythm, my timing going forward.”

Rodgers also made reference to the film clip from the team’s Super Bowl season 10 years ago; but it wasn’t until after the NFC Championship Game loss to the visiting Tampa Bay Buccaneers that he finally revealed what he saw.

“The key that I saw was just the rhythm in my hitch,” Rodgers said last month during an appearance on “The Pat McAfee Show.” “I was realizing the thing that I was working on back then so much was the sinking into the hitch at the top of my drop. And that was one area that I think that was lacking based on my injury and some of the adjustments I had to make fundamentally to deal with a knee and a leg that just wasn’t as strong as it used to be.

“And that’s part of the reason why I really got back into squatting, was ’cause I wanted to build that thing up so I could put a ton of weight and pressure into that knee and those legs, because the deeper I was sinking into my hitches, the more on time I was throwing the ball. And I really just saw how much of an emphasis I was doing that in 2010, 2009, 2011, and what that was allowing me to do was I was throwing the ball on time, and all these games I was watching, my timing was very, very good.”

Henry won with 32 out of the 50 votes, easily eclipsing Rodgers and Mahomes, who each got five votes.

Henry turned in the NFL’s fifth-highest single-season rushing total with 2,027 yards. He also rushed for 17 touchdowns, becoming the sixth player in NFL history to lead the league outright in rushing yards and touchdowns in back-to-back seasons.

Henry is just the fourth running back to win offensive player of the year since 2010 and the first since Todd Gurley in 2017.

Donald won defensive player of the year for the third time in four years, also taking home the award following the 2017 and 2018 seasons. He joined Lawrence Taylor and J.J. Watt as the only players to earn the honor three times since it was first presented in 1971.

Donald led all players with 54 pressures this season, according to ESPN Stats & Information research. He also led the league for the third straight season in pass rush win rate as an interior defensive linemen (24.2%), despite being double-teamed on 65.7% of his pass rushes (third-highest rate in league).

Herbert and Young both were clear winners in the rookie voting. Herbert got 41 votes, while Minnesota Vikings wide receiver Justin Jefferson was runner-up for the offensive award with nine votes. Young received 42.5 votes, and Carolina Panthers safety Jeremy Chinn was second on defense with 4.5.

Herbert was the sixth overall pick in the 2020 NFL draft and threw for 4,336 yards and 31 touchdowns — a single-season rookie record — in 15 games.

“Thank you to the Chargers organization, the Spanos Family, Tom Telesco and [former] coach Anthony Lynn for taking a chance on a kid from Eugene, Oregon,” Herbert said in a recorded video message. “Without them, none of this is possible. While it’s an incredible honor just to be in the conversation for this award, I know it’s not possible without my teammates.”

Young was the second overall pick in the draft and posted 7.5 sacks, four forced fumbles and three fumble recoveries, something only 2003 defensive rookie of the year Terrell Suggs has done as a rookie over the past 20 seasons.

“It definitely wasn’t the rookie season I expected, just with the pandemic and everything going on,” Young said.

Also on Saturday, Kevin Stefanski, who led the Cleveland Browns to their first winning season since 2007, first playoff appearance since 2002 and first postseason win since 1994, won coach of the year.

Washington quarterback Alex Smith, who suffered a broken fibula and tibia followed by 17 surgeries because of infections that nearly cost him his right leg, was named comeback player of the year.

Smith went 5-1 as a starter this season to help Washington make the playoffs.

“Two years ago, I was sitting in a wheelchair wondering, ‘Had the life I had known changed forever?'” Smith said in a recorded acceptance speech. “Anger, pity, self-doubt, why me? These were feelings I had at certain points throughout my career, but this time, it wasn’t about football. It was bigger. It was about me being a father to play with my children, a husband to go on walks with my wife and, despite my new limitations, me getting my life back.

“My goal was football, not because I thought it was a reality, but because I knew my life would be better because of it. … It took 728 days, 728 of small victories and major setbacks, of countless hours of physical therapy and just as many sleepless nights.”