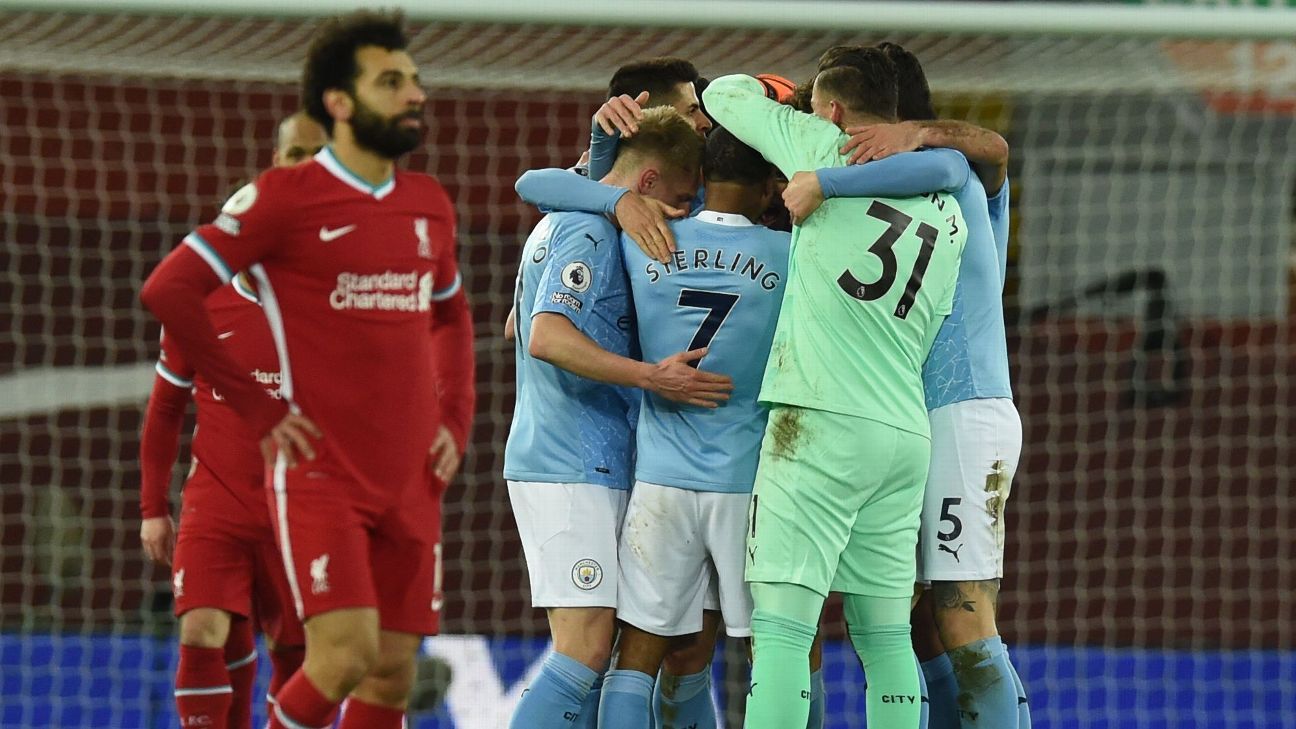 
LIVERPOOL, England — The Premier League trophy still sits on display in Liverpool’s club museum at Anfield, but they can start to take off the red ribbons and label it for a return to previous owner after Manchester City’s rampant 4-1 victory on Sunday made this season’s title race a formality and ended the defending champions’ hopes of retaining their crown.

To suggest that City’s win signalled a changing of the guard would be over-playing things somewhat, considering that Pep Guardiola’s team had won back-to-back titles prior to Liverpool’s first in 30 years last season.

For City, they will believe their victory — a first at Anfield since 2003 and for Guardiola as a manager — was merely a sign of normal service being resumed. This, though, was much more; it was a statement to the rest of the Premier League that they are, by some distance, the best team in the country.

“We have done brilliantly, so I can’t deny how happy we are,” Guardiola said. “To come here and finally win is very important. It is an important win, but in February, nobody is champions. I cannot predict the future, but all I can predict is work and work. Tomorrow, we look to the next game.”

Guardiola is right to be pragmatic, but it would be foolish to understate the manner of his team’s latest victory, because they tore Liverpool apart.

Meanwhile, an outstanding performance by Phil Foden, who made City’s second goal and superbly scored the fourth, highlighted just why the 20-year-old is regarded as the jewel of the club’s youth academy. Raheem Sterling, Ilkay Gundogan and Bernardo Silva were also unstoppable in midfield.

Having lost their last two home games, against Burnley and Brighton, Liverpool’s confidence going into this fixture was clearly deflated, but they ended it not only having been beaten again, but with their opponents making them look ordinary.

Less than a year after Jurgen Klopp’s team were hailed as one of the best — if not the best — teams of the Premier League era, their defence of the title has crumbled after just half a season and the objective now is simply to secure qualification for the Champions League.

Liverpool are 10 points behind leaders City, having played one game more than Guardiola’s men, so they can forget about the title. Keeping West Ham, Everton and Chelsea at bay in the battle for fourth is the priority and that is not a foregone conclusion for a team that lacks energy and ideas and will be without their best defender, Virgil van Dijk, until next season.

“It’s very difficult to explain that we lost 4-1,” Klopp said. “We scored our goal and in that moment, the game can go in two directions, but Alisson made two massive mistakes, gave two goals and then there was a genius situation from Phil Foden.

“But we just have to carry on,” Klopp continued. “It’s not the best moment of our lives and we will try everything [for the top four]. There are enough games to secure that, but we have to win them.”

City have no such concerns. Manchester United might still harbour faint hopes of challenging for the title, but this result moved their neighbours five points clear of Ole Gunnar Solskjaer’s team and City still have a game in hand, so there is little hope for the chasing pack.

Guardiola’s team are simply playing too well to be caught, despite the ongoing absence of Kevin De Bruyne and Sergio Aguero.

They have won 14 consecutive games in all competitions and could even afford to miss another penalty before sealing this latest victory. Gundogan’s first-half miss from the spot was the third penalty City have missed against Liverpool in their last four league games, but it didn’t matter in the end.

It was City’s control of the ball, movement in the attacking third and determination to target Alexander-Arnold and Robertson that made them so devastating. Liverpool had no response and looked one-paced and predictable, even though Mohamed Salah gave them hope of a victory by scoring from the penalty spot on 63 minutes to cancel out Gundogan’s opener, scored just after half-time.

Salah’s goal was Liverpool’s first in the league at Anfield for 411 minutes, which tells you everything about their form slump over the past two months. Klopp’s men could not build momentum after equalising, though, and City quickly regained the upper hand.

John Stones had a goal ruled out for offside, but two minutes later Gundogan made it 2-1 after Alisson’s clearance had fallen to Foden, who dribbled into the box before teeing up the German to net from close range.

Sterling quickly made it 3-1, heading in Bernardo’s cross at the far post after another Alisson mistake, before Foden, in front of the watching England manager Gareth Southgate, struck an unstoppable fourth on 83 minutes.

The celebrations on the City bench were testament to the importance of Foden’s goal and the victory that it confirmed. This was a game that could have halted their form surge, six days before a tricky home clash with Tottenham, but instead they breezed through and consigned Liverpool to the role of outgoing champions.