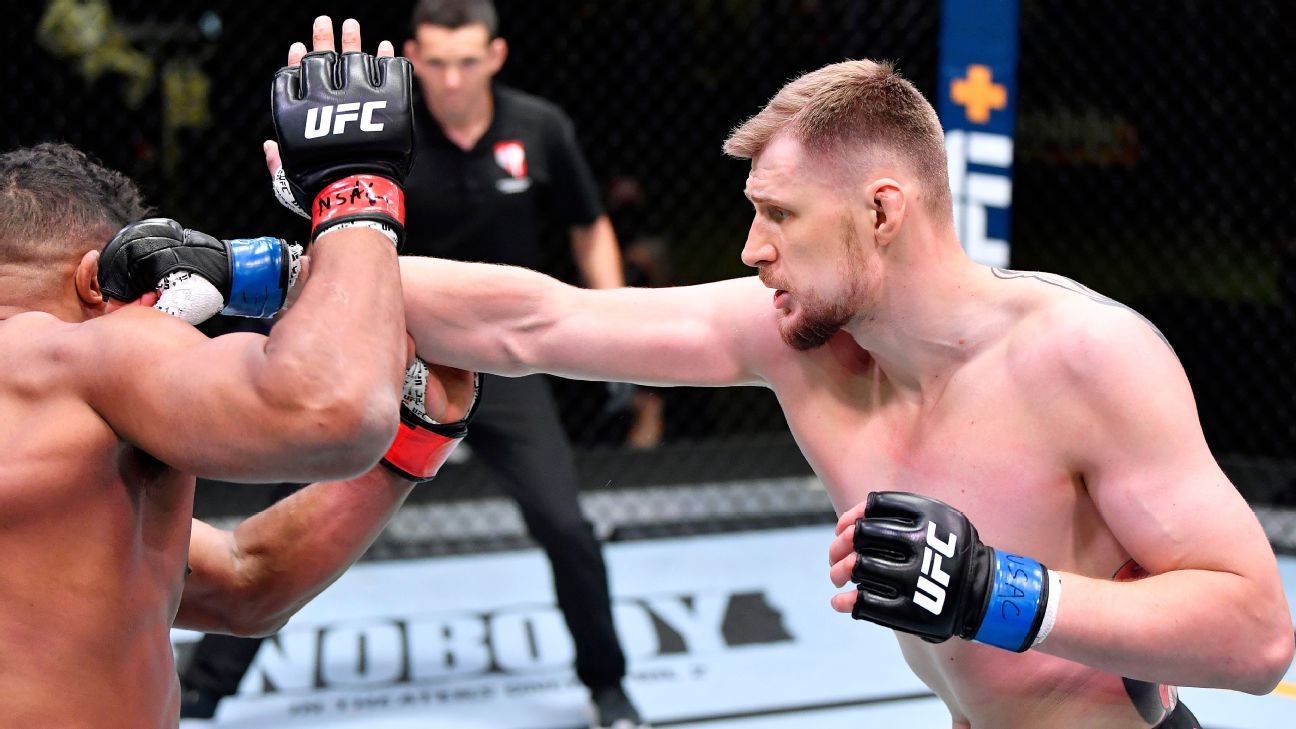 
Alexander Volkov has had some impressive performances throughout his MMA career. His knockouts of Stefan Struve and Fabricio Werdum come to mind. His most recent win over Walt Harris, as well. Of course, his Bellator run was pretty great, too.

That was a masterful performance against a legend, Alistair Overeem, who has looked pretty darn good in his own right recently. What impressed me most about Volkov’s second-round TKO victory on Saturday night was that he kept it simple. Sometimes simple is best. As Dominick Cruz pointed out during the fight broadcast, his 1-2 was on point throughout. He found the openings in Overeem’s guard and continued to tee off.

All fights from UFC Fight Night: Overeem vs. Volkov will be available to watch on ESPN+.

That’s not to suggest what he did wasn’t impressive. On the contrary, it just means he fought a smart, tactical fight. Nothing flashy, nothing fancy. It was beautiful to watch.

This is a heavyweight who as recently as November 2019 needed to go the distance in a three-round fight to beat unranked Greg Hardy, and then followed up that performance with an uninspired loss to Curtis Blaydes last June. Not a great stretch, not that long ago.

But, since then, he won via TKO against Harris in October and has now followed that up with this incredible win over Overeem.

The difference? Well, since that Blaydes loss, Volkov has gained about 20 pounds. The good kind of 20 pounds, too. Big difference. He’s stronger than ever, and it shows in his strikes.

Volkov told Daniel Cormier after the fight that he isn’t willing to say this is the best version of him because he thinks he can get better. That’s a scary thought, but I believe him. Remember, he’s only 32, which is young for a heavyweight. Overeem is 40.

The questions now are, just how much better can he get, and of course, who should he fight next?

The first answer remains to be seen. The second, well, I think it’s a no-brainer: Volkov versus the winner of Jairzinho Rozenstruik vs. Ciryl Gane has to be the call, right? That fight happens in three weeks, so the timing is perfect, and either winner versus Volkov produces a really interesting matchup.

It’s tough to see a legend like Overeem get beat up like that, especially just minutes after another legend, Frankie Edgar, suffered a similar heartbreaking fate, but that’s the fight game. I don’t think this marks the end of Overeem’s run — nor Edgar’s, for that matter — but the end is no doubt near. And in Overeem’s case, Volkov just expedited it with one heck of a performance. — Ariel Helwani

Dariush needs to be considered in any UFC top-tier matchmaking

Dustin Poirier is in the driver’s seat for a UFC lightweight title shot. Charles Oliveira, Michael Chandler and Justin Gaethje are all in that conversation. Then there’s Conor McGregor, the most popular fighter in UFC history, and former champion Rafael dos Anjos. The 155-pound division is the best in the UFC — there’s no doubt about it.

And now it’s time to add Beneil Dariush to the conversation. Dariush has won six straight. Only Oliveira has a longer divisional winning streak. Dariush looked very good against an underrated Diego Ferreira, emerging victorious via split decision Saturday. Before the Ferreira fight, Dariush had finished four opponents in a row.

Dariush is exciting. He can grapple and strike. He has power in his hands. He’s opportunistic with submissions. Throw Dariush in there with any one of those elite guys at lightweight, and there will be fireworks. He has done enough now to get a huge fight. Don’t wait. Oliveira arguably should have gotten a major contender fight long before he beat Tony Ferguson in December. Dariush is the next man up to break into that upper echelon at 155 pounds. — Marc Raimondi

Sandhagen should not have had to audition for a title shot

After his stunning knockout of Frankie Edgar, Cory Sandhagen predicts he’ll knockout the winner of Petr Yan vs. Aljamain Sterling.

Cory Sandhagen is No. 3 in the ESPN bantamweight rankings, and with No. 1 Petr Yan set to defend his championship against No. 2 Aljamain Sterling on March 6, Sandhagen was positioned to be next in line even before Saturday night. He has had just one loss since early 2017, and he had proved his worth in October by knocking out Marlon Moraes, who a year earlier had competed for the belt.

But this is the UFC, where a weight division’s hierarchy sometimes takes a backseat in the booking of title fights. Matchups that the promotion’s brass believes will attract the most paying customers tend to find their way onto the schedule. And with former champion TJ Dillashaw back from performance-enhancing drug suspension and looking for a fight — a big fight — who knows which direction the matchmakers will look?

Well, Sandhagen put on a performance that drew all of the attention to himself. It wasn’t just that he defeated former lightweight champion Frankie Edgar, or even that he did it in the first round. Both of those things had been done before. But the 28-year-old created a moment to remember. Flying knee. Edgar in a slow-motion fall, face-first and stiffened. A legend unconscious. Twenty-eight seconds.

Sandhagen then aided his cause by delivering a blistering callout of the Yan-Sterling winner, concluding with this: “The winner of those two gets knocked out by me in July.” Maybe those self-assured words will prove to be what gets him the title fight. But, really, his stunning half minute in the Octagon spoke for itself. The UFC wouldn’t dare pass over this guy in favor of a PED cheat. Sandhagen has next. He has to. — Jeff Wagenheim

What’s next for Saturday’s headliners?

What Should be Next: Winner of Jairzinho Rozenstruik vs. Ciryl Gane on Feb. 27

That fight between Rozenstruik and Gane is a five-round main event on Feb. 27. Those two will receive media attention leading up to that main event, and the winner should have some steam coming out of it. Volkov deserves that type of fight — and like I said, regardless of whether Rozenstruik or Gane is willing to admit it, a win over each other won’t quite be enough to earn the title shot. And that’s where Volkov comes in.

What Should be Next: Retirement

Does Overeem have to retire? Maybe not. He’d won four of five going into Saturday, and the only loss during that stretch was a last-second KO loss to Rozenstruik in a five-rounder he’d looked good in up to the finish.

But the question of, “Why continue?” has to be a real one for Overeem right now. He has admitted the end is near. He has repeatedly said he just wanted one final run at the title. That run more or less ended on Saturday. Never say never, and strange things happen in this sport all the time, but trying to envision a path for Overeem to get to the title is nearly impossible. There are so many contenders ahead of him at this point, and so many difficult fights he’d need to win to even enter the conversation.

There really is no competitive reason for this man to continue. He has basically done it all. He’s a legend of the game. He can walk away with his head high. There’s not even an argument for him to come back and try to leave on a win, because who cares? What does one more win for Overeem do at this point? Hat’s off, Alistair. Absolutely remarkable career.

What Should be Next: Winner of Petr Yan vs. Aljamain Sterling on March 6

Yeah, man — you win a fight like that, against a competitor like Edgar, you get a title shot. And I know Sandhagen was a big favorite in this fight, but he just knocked out Edgar in 28 seconds. Spectacularly.

I don’t care that he was a big favorite. And I don’t care that he just lost to Sterling last June. Sandhagen is now 7-1 in the UFC, and all but one of the opponents he has faced in the Octagon has had significantly more experience than him at the time they fought.

He learned from the Sterling loss. He’s one of the most unorthodox and most difficult opponents to prepare for. He is very clearly the next No. 1 contender from a rankings perspective — and competitively, there is no doubt in my mind this guy is capable of beating Yan or Sterling on any given night. The UFC needs to figure out what to do with TJ Dillashaw, who is eligible to return, but in my opinion, Sandhagen is ahead of him for the title shot.

What Should be Next: Dominick Cruz

I’m assuming there will be calls for Edgar to retire after a loss like this, and certainly, that is a viable option. This was a scary knockout, and Edgar is approaching his 40th birthday. If he can’t win a championship, I’m not sure what he is fighting for. And one can argue that a 135-pound title is now out of his reach.

At the same time, one can argue it’s not. He went into Saturday as the fourth-ranked bantamweight in the UFC. He just lost to the No. 2 bantamweight in the UFC. It’s not as if he’s going to plummet down the rankings. Cruz is scheduled to fight on March 6, against Casey Kenney. If Cruz wins, he’ll still need at least two more victories before he’s in title contention himself.

Cruz vs. Edgar would be a heck of a fight for nostalgic MMA fans who have been watching these guys for the past 10 years plus. I’ll say win or lose for Cruz in March, I’d love to see Cruz vs. Edgar. — Brett Okamoto