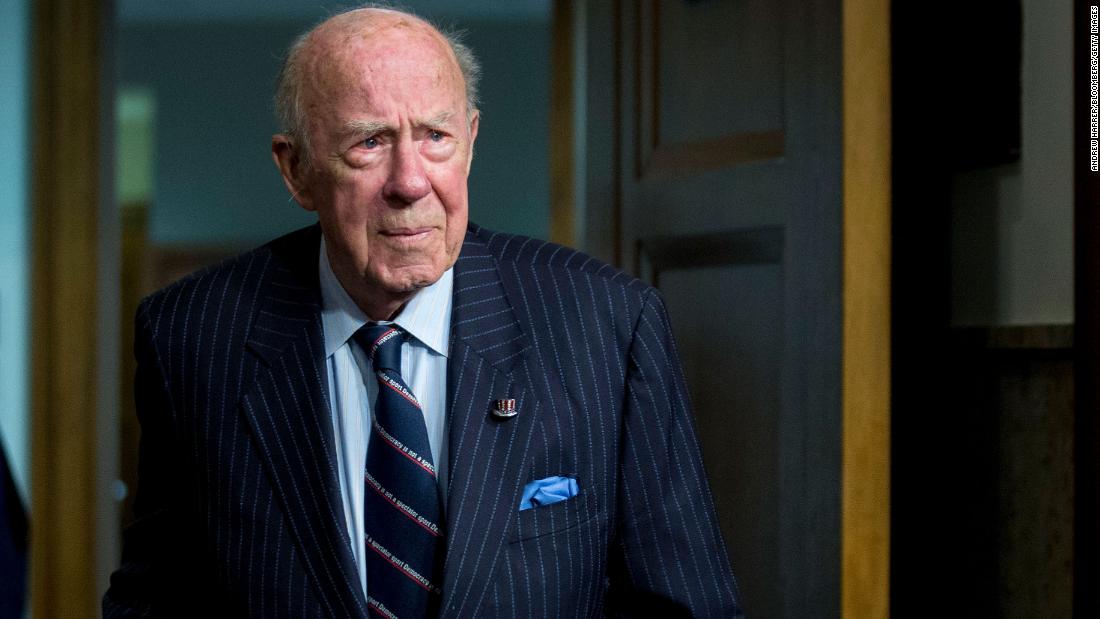 His work in presidential administrations extended back to President Dwight D. Eisenhower, when Shultz worked as a senior staff economist on his Council of Economic Advisers during the 1950s.

“Our colleague was a great American statesman and a true patriot in every sense of the word. He will be remembered in history as a man who made the world a better place,” former Secretary of State and Director of the Hoover Institution Condoleezza Rice said in a statement.

Shultz, who was awarded the Presidential Medal of Freedom in 1989, had been working as a Thomas W. and Susan B. Ford Distinguished Fellow at the Hoover Institution before his death, according to the statement, which said he worked at “Stanford nearly every day until his passing.”

He died at home in California. The cause of death was not given.

President Joe Biden hailed Shultz as a “gentleman of honor and ideas” in a statement Sunday evening.

“I regret that, as president, I will not be able to benefit from his wisdom, as have so many of my predecessors,” Biden said.

“And, while he and I sometimes argued the opposite sides of issues when I was a young senator, I was proud to often find common ground on issues vital to the security and prosperity of the American people,” the President added.

Secretary of State Antony Blinken called Shultz a “legend” and a “visionary” in a statement remembering him Sunday, noting that he “urged serious action on the climate crisis at a time when too few leaders took that position.”

“Every Secretary of State who came after George Shultz has studied him — his work, his judgment, his intellect. I know I have,” Blinken added.

“Our state is fortunate that Secretary Shultz headed west later in his career, bringing his wisdom and insight to advising Governor (Arnold) Schwarzenegger, roles at the Hoover Institution and more,” Newsom said in a statement.

House Speaker Nancy Pelosi, a longtime friend of Shultz’s, said in a statement Sunday that with his passing, “the world has lost a revered statesman and brilliant public servant.” The late secretary, she said, had “dedicated his life to promoting a more peaceful and secure future.”

During his nearly seven years at the State Department, Shultz “inherited a number of foreign policy challenges, including war in Lebanon, delicate negotiations with the People’s Republic of China and the Government on Taiwan, and a ratcheting up of Cold War tensions with the Soviet Union,” his official State Department biography said.

The department said his “positive responses to the overtures of Gorbachev and his Foreign Minister, Eduard Shevardnadze, and through his own initiatives, Shultz helped to draft and sign landmark arms control treaties and other agreements that helped to diminish US-Soviet antagonism.”

During his time as secretary, Shultz was especially concerned with the global threat of nuclear weapons, according to the Hoover Institution, which said the diplomat once told Stanford students that “in an age of nuclear weapons, maintaining collective security is no easy task.”

“We must both defend freedom and preserve peace. We must seek to advance those moral values to which this nation and its allies are deeply committed. And we must do so in a nuclear age in which a global war would thoroughly destroy those values,” he said.

Shultz also took on challenges in the Middle East, having brokered an agreement between Israel and Lebanon in which Israel agreed to start withdrawing troops, according to his State Department biography, which noted the late diplomat was, however, “unable to forge a lasting resolution to the Middle East conflict.”

Shultz made headlines during the 2016 election when both he and former Secretary of State Henry Kissinger declined to endorse either major party candidate.

“We are not making any endorsement in the current presidential election,” they wrote in a joint statement. “We are dedicated to fostering a bipartisan foreign policy and we will devote ourselves to this effort now and after the election.”

Shultz also unsuccessfully lobbied the Trump administration to stay in the Paris climate agreement, co-writing a 2017 op-ed that argued the business case for the international accord.

“This is as close as big business gets to a consensus position,” the op-ed read, arguing that “our companies are best served by a stable and predictable international framework that commits all nations to climate-change mitigation.”

This story has been updated with additional details.