After Man City’s huge win at Liverpool, is a domestic treble next for Guardiola & Co. this season? 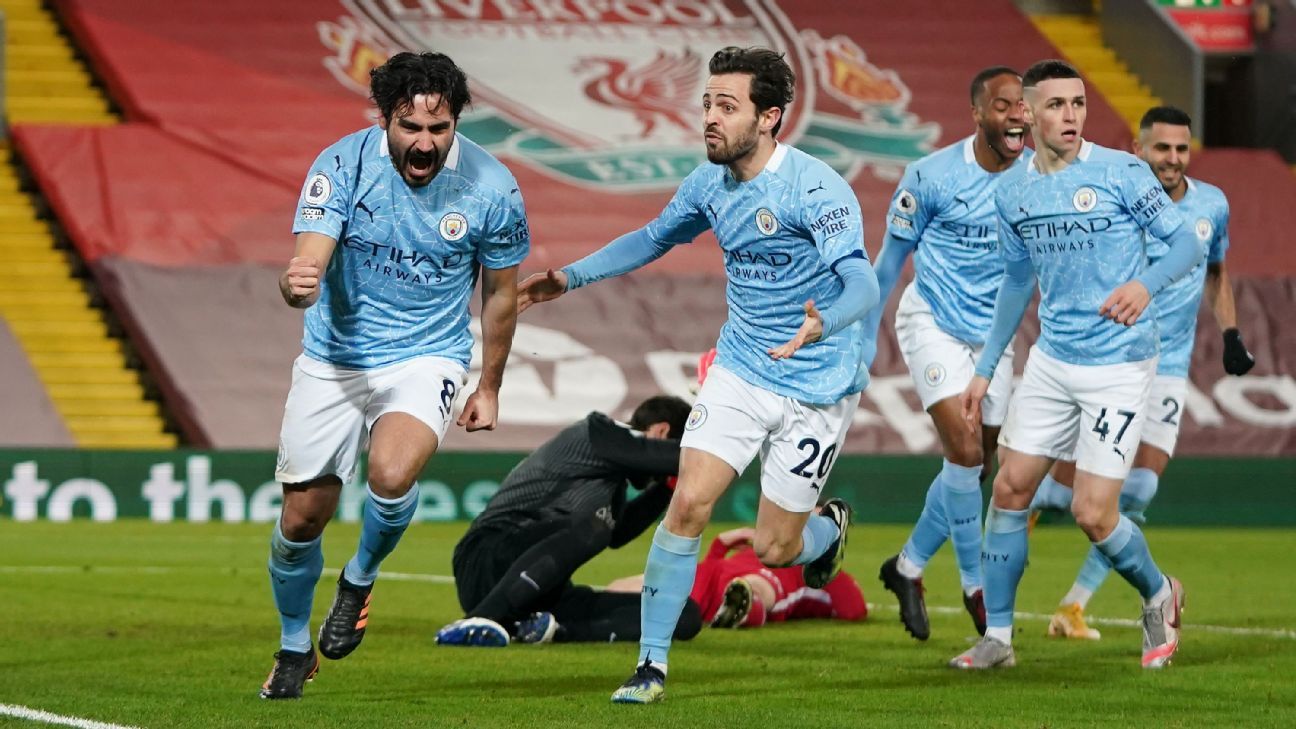 
There is an inescapable sense of deja vu about Manchester City right now and, if it proves to be correct, they will end the season having achieved another domestic treble.

Sunday’s 4-1 victory at Liverpool in the Premier League sent City five points clear at the top of table, with a game in hand on all of their rivals, and delivered a chilling warning to the chasing pack that Pep Guardiola’s side are threatening to disappear over the horizon. If they win their game in hand against Everton at Goodison Park on Feb. 17, the rest will be playing for the dubious distinction of finishing second.

But as City prepare to travel to Wales to face Championship promotion contenders Swansea City in the FA Cup fifth round on Wednesday (stream LIVE on ESPN+ at 12:20 p.m. ET in the U.S.), it is not just the Premier League trophy that could be added to the growing honours list at the Etihad Stadium.

City are already in the Carabao Cup final; they will face Tottenham at Wembley on April 25 as strong favourites to win the competition for the fourth year in a row. And with a lower-league outfit standing between them and a place in the FA Cup quarterfinals, that achievement of sweeping the board of major domestic honours in 2019 may yet be repeated just two years later by Guardiola’s latest outstanding team.

Of course, every cup competition carries an element of jeopardy for even the biggest clubs, as Bayern Munich and Real Madrid have discovered to their cost in domestic cups this season with defeats against Holstein Kiel and Alcoyano, respectively. But City have developed an aura of invincibility in the FA Cup and Carabao Cup in recent seasons, which makes it almost impossible to bet against them emerging victorious again in both competitions this time around.

Guardiola’s team has not been eliminated from the Carabao Cup since a fourth-round defeat against Jose Mourinho’s Manchester United in October 2016, while last season’s FA Cup semifinal defeat against Arsenal was their only defeat in that competition since February 2018. City have become a cup juggernaut in England, and none of the top clubs still standing in the FA Cup — United, Everton, Spurs, Leicester and Chelsea — will hold any fears for Guardiola or his players.

Two years ago, City’s biggest scare en route to winning both cups was a quarterfinal at Swansea, when the home side led 2-0 until the 69th minute. Three goals in the final 21 minutes turned the tie on its head for City and they never looked back from that point on, beating Brighton & Hove Albion in the semifinal before equalling the all-time biggest FA Cup Final winning margin with a 6-0 win against Watford at Wembley.

Will it be any different this time, and can anybody stop City from another domestic treble?


The manner of Sunday’s victory at Liverpool emphasised City’s status as, by some distance, the best team in the country right now. They are on a run of 14 straight wins in all competitions, and they are unbeaten in 21 games. Back in 2019, City won 18 and drew one of their final 19 domestic games, so their form is showing a familiar pattern of dominance. But while the statistics offer compelling evidence of their surge towards silverware, it is also worth looking at the depth of Guardiola’s squad for another key factor to support the theory that they can pull off another treble.

Sunday’s 4-1 win at Liverpool — the first time City have scored four at Anfield since 1937 — was achieved without the injured Kevin De Bruyne and Sergio Aguero, who has yet to overcome the effects of COVID-19. It was also secured with the likes of Aymeric Laporte, Kyle Walker, Fernandinho, Ferran Torres and Benjamin Mendy consigned to the bench as unused substitutes. Gabriel Jesus, usually the man to fill in for Aguero, played for just 18 minutes as a second-half substitute.

No other Premier League team has such a depth of experience beyond the starting XI and, in the weeks ahead, Guardiola will be able to rotate his squad and ensure ongoing freshness while City’s rivals struggle to keep pace with the unique demands of a season that has been shortened and congested as a consequence of the pandemic. That said, Guardiola will believe he has little need to change a winning team right now because his players are performing at such impressive levels.

Phil Foden’s display at Anfield quite rightly claimed the headlines, as the 20-year-old stole the show with his stunning late goal. But it’s also worth noting that no player has scored more league goals since the start of December than Ilkay Gundogan — the midfielder’s two at Anfield made it nine since Dec. 1 — and Mohamed Salah’s second-half penalty for Liverpool was the first Premier League goal conceded by City goalkeeper Ederson Moraes in 831 minutes. Only Edwin van der Sar and Petr Cech have recorded lengthier shutouts in Premier League history.

Unlike in 2019, when their toe-to-toe title battle with Liverpool kept them at the front and centre of the spotlight, City have flown under the radar for much of this season, having made their worst start for over 10 years. But the end result might just be the same — more success and more history — because they are simply so much better than everyone else.