Paige Bueckers takes over to deliver No. 2 UConn to win over No. 1 South Carolina in OT 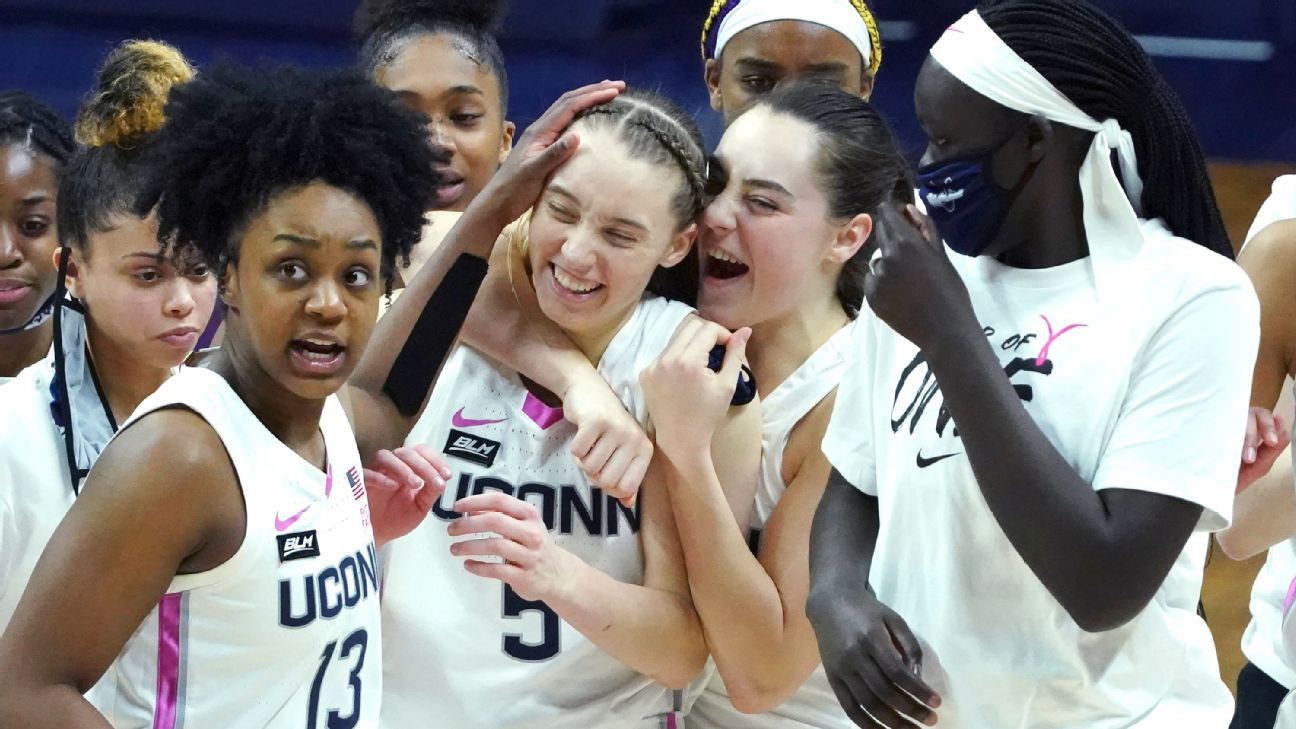 UConn women’s basketball coach Geno Auriemma likes to make analogies to other sports, which is how famed running back Jim Brown came up when Auriemma was talking about freshman sensation Paige Bueckers.

Bueckers had her third consecutive game of 30 points or more — something no other UConn player has ever done — as her 31 points lifted the No. 2 Huskies over No. 1 South Carolina 63-59 in overtime on Monday in Storrs, Connecticut. The 5-foot-11 guard scored the Huskies’ final 13 points, including all nine in the extra period, and played all 45 minutes. She made 14 of 26 shots from the field and had 4 rebounds, 5 assists and 6 steals.

“She’s very slow, and I say that with a high degree of appreciation,” Auriemma said. “She takes her time … she’s like when Jim Brown used to run. When she gets the ball, she’s like, ‘Should I go to that hole, that hole, that one … what’s the best decision for me right now?’ She waits until the absolute last minute, and nothing rushes her. So you can’t make her play faster than she wants to play.

“When you’re as good a shooter as she is … she really just has a lot of confidence in her ability. If she can get one off, she thinks it’s going in. I marvel sometimes at how hard she has to work because of the defensive attention that she gets every night. She’s just good.”

This game didn’t become a matchup of the top two ranked teams until Monday afternoon, when the Associated Press poll came out. Eleven-time national champion UConn has been in many of these games since ascending to national status in the 1990s. Even though the Huskies are 14-1, this isn’t a powerhouse team like many UConns in the past; even Auriemma would say that.

But it does have a superstar freshman who expertly scores off screens and steps forward in the biggest moments like a longtime veteran. Bueckers, who was the No. 1 recruit from the class of 2020, is leading the Huskies in scoring (21.1 PPG), assists (5.6 APG) and steals (2.6 SPG). She is shooting 56.9 percent from the field, 55.6 from 3-point range.

UConn has had a treasure trove of past superstars who also had remarkable freshmen seasons, including Diana Taurasi, Maya Moore and Breanna Stewart in the past 20 years, all of whom went on to be the MVP in the WNBA. None of them, though, were playing on a team with six other freshmen, as Bueckers is. It means it’s her team in a way it wasn’t for those other superstars as freshmen. She is getting an enormous spotlight and so far is excelling even beyond expectations.

Yet if the Gamecocks had hit one of the four shots they had at the basket at the end of regulation— Destanni Henderson’s jumper was short, then Victaria Saxton missed a putback, followed by Aliyah Boston’s two missed putback attempts — Bueckers wouldn’t have been the story of the night.

The Gamecocks will rue their missed layups, which ruined their normally lethal transition game, missed free throws (8 of 15) and turnovers (21). They kept the Huskies 24.1 points below their season average of 87.1 coming into the game, held them to just 2 of 15 from behind the arc and outrebounded them 52-39.

South Carolina ended the 2019-20 season ranked No. 1 and started this one in the same place, before losing to NC State on Dec. 3. The Gamecocks replacement in the top spot, Stanford, dropped down after an overtime loss at Colorado on Jan. 17, and Louisville took over at No. 1. When NC State beat Louisville last Monday, South Carolina elevated to No. 1 again in this week’s poll.

But it will be a short stay, because the Gamecocks’ mistakes and Bueckers’ big shots Monday did them in. The second of the Huskies’ 3-pointers came from Bueckers with 13 seconds left, hitting the rim, bouncing high in the air and then falling through the net.

“It felt good when it left my hand,” said Bueckers, who missed her other five 3-point attempts. “But, yeah, I would say that was a really nice bounce.”

It was that kind of night for her, but it’s already become a regular thing just 14 games into her college career (she missed one game with an ankle sprain). Bueckers also had a 3-pointer with 28 seconds left against Tennessee on Jan. 21 that was the dagger shot of that 67-61 victory.

“It’s still crazy to me,” Bueckers said of how here UConn career has started. “Just the blessings that I’ve been given, just the opportunities I’ve received. It’s all just so crazy to me that I’m here playing at my dream school in huge games like this with an amazing team and coaching staff. Every day, every second, every minute, I’m super grateful to be here.”