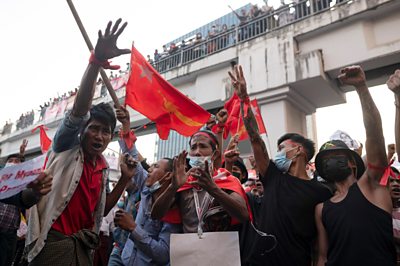 
On Monday, tens of thousands of people across Myanmar took part in protests for a third day.

It’s been a week since since the army seized power and members of the National League of Democracy – which won the general election in November – have been detained, including their leader, Aung Sang Suu Kyi.

In a speech on television, the leader of the coup, General Min Aung Hlaing, argued that civilian leaders had failed to hold a proper election and promised fresh elections in a year’s time.