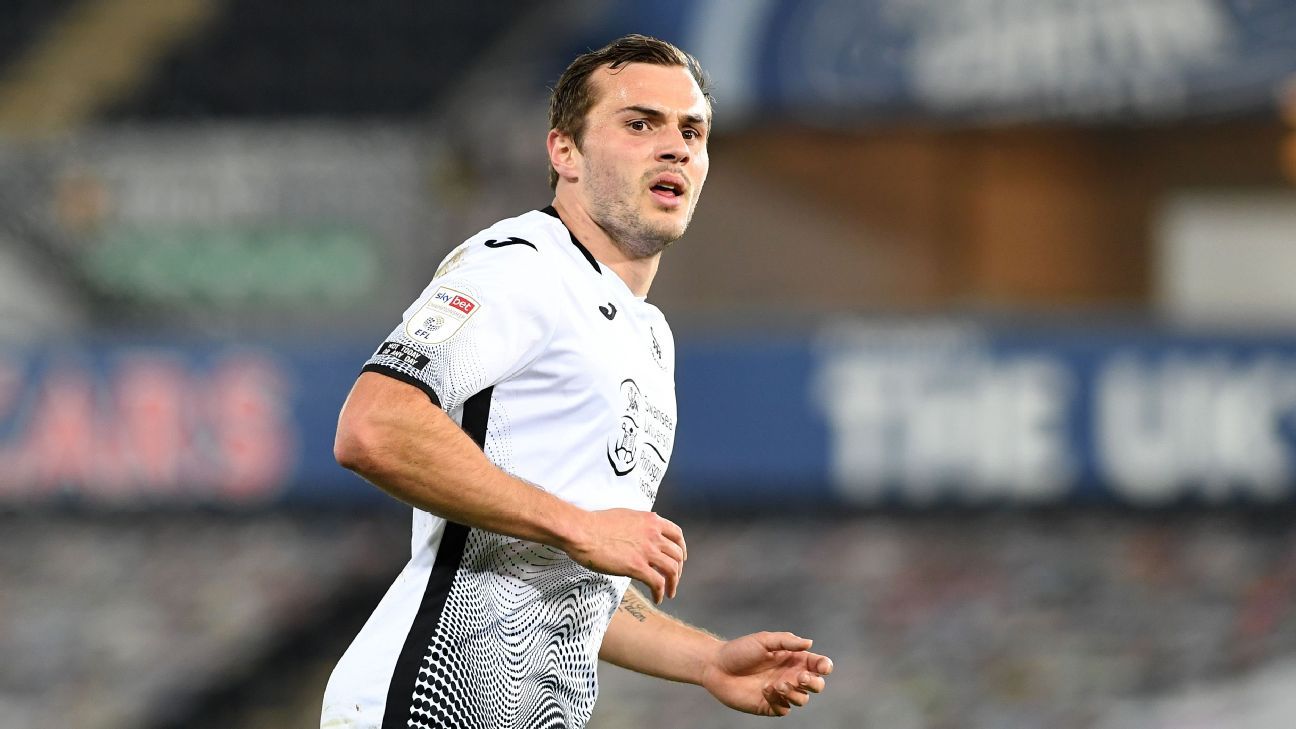 
These days, the career path for young American players seems straightforward: Get your butt to Europe as early and as quickly as possible, and then progress from there. It’s an approach that, in the past six months alone, has seen the likes of Bryan Reynolds (FC Dallas to Roma), Mark McKenzie (Philadelphia Union to Genk), Brenden Aaronson (Philadelphia to FC Salzburg), and Daryl Dike (Orlando City to Barnsley), each make moves abroad before their 22nd birthdays.

The recent exodus continues an ever-growing trend for American stars, with the likes of Christian Pulisic, Weston McKennie, Tyler Adams and Giovani Reyna having all previously crossed the Atlantic as youngsters.

All of which makes the paths taken by Paul Arriola and Jordan Morris feel anachronistic by comparison. Both recently completed loan moves to English Championship high-flyers Swansea City — and could line up against Manchester City this Wednesday in the Carabao Cup (12:30 p.m. ET, ESPN+) — but did so at the relatively advanced age of 26. Not that it’s too late by any means.

“My goal was always to grow as a player, and that continues to be my goal,” said Arriola. “How can I push myself? How can I take myself to the next level?”

Granted, each career carries with it its own momentum. For some, the path is clear early on and resembles a beautifully paved road. Others can get stuck in blind alleys or turn down opportunities to move abroad, the path not taken haunting them at the end of their playing days. There is also a school of thought that starting out abroad and then returning to MLS is akin to forever turning one’s back on foreign opportunities. Yet that is what Arriola did, beginning his career with Liga MX side Club Tijuana, where he spent four years.

While Arriola made himself useful for Xolos, he never quite rose to the ranks of being indispensable. So when D.C. United came calling in 2017 with a $3 million transfer fee, he jumped at the chance, eschewing other opportunities overseas, and became a consistent presence for both the Black-and-Red and the United States men’s national team. All the while, the California native never closed the door on future opportunities abroad.

“My thoughts were I can use MLS as a trampoline bounce, and then go further if I was successful,” he said. “I found some stability [with DCU], and I was able to establish myself. I continued to want that same type of career where you’re a constant impact player, you’re always involved in games.”

As much as it’s become a cliche that there are myriad paths to a successful pro career, Morris seemed to violate even more tenets of how best to navigate that path. He turned down a homegrown deal with the Seattle Sounders when he was 18 in order to go the much-maligned college route and attend Stanford University. His reasoning was simple — with the likes of Clint Dempsey, Obafemi Martins, and Eddie Johnson on the team’s books, playing time would be hard to come by. Going to a high-level program like Stanford would still test him.

“Going [to Stanford], I felt that my path was just going to be: play however many years there, hopefully, try to win a national championship and then come back to the Sounders because European teams aren’t scouting college kids,” he said.

A scrimmage against the U.S. men’s national team ahead of the 2014 World Cup changed everything. Morris impressed then-U.S. manager Jurgen Klinsmann so much that he was called up to the senior team later that year, becoming the first college player in 15 years to play for the USMNT. Then in 2015, in his first international start, the forward scored in a friendly against rivals Mexico. When Morris decided to turn professional in early 2016 following his junior year at Stanford, he trained with and received an offer from Bundesliga side Werder Bremen. Seattle was also trying to land the forward, but it was clear what most observers thought he should do: Head to Germany. Morris disagreed, joining the hometown Sounders instead.

That decision was panned in some circles: then-U.S. international Jermaine Jones said at the time that Morris took “the easy way.” But Morris felt that being near home would help him adapt to the professional game, and time has shown the move clearly paid off with a pair of MLS Cups to his name. When Morris tore his ACL in 2018, being close to family aided his recovery. And like Arriola, Morris never felt like he was completely giving up on a European move.

“I felt confident that that option would be there,” he said. “But again, at the time, and even now, if I played my whole career in Seattle, I think I would have been really, really happy and fulfilled and felt that I developed really well as a player.”

ESPN highlights the biggest stories around United States stars plying their trade overseas, bringing inside information to their successes and struggles, sitting down with some of the national team’s top players, and scouting the next generation of Americans breaking through across Europe.

Could either player have developed quicker if they had pounced on overseas opportunities earlier in their careers? It’s impossible to say. One or both might have seen their stock skyrocket, but plenty of American careers have dried up in Europe as well. They certainly head to Europe now as more established, mature players.

Timing was a factor as well in terms of making a move now. Morris said he had been feeling the itch in recent years to test himself overseas. With MLS not scheduled to start until April 3, Arriola spoke of not wanting to wait a few months for his next competitive match, especially as he continues to return to full strength following an ACL injury of his own. With a busy international calendar ahead, testing themselves and staying sharp will be paramount. And now they’ll have each other to lean on as well, on a club in the thick of the Premier League promotion race.

“Paul and I are really close, [and have been] for a while now with the national team,” said Morris. “He’s one of my good friends, so it’s pretty surreal actually, that we ended up in the in the same spot.”

Especially given the paths they took.— Jeff Carlisle

A few minutes with … Reggie Cannon

The 20-year-old recently caught up with ESPN’s Tom Hamilton to discuss his decision to move to Europe, life in Portugal and what it is like at Boavista so far.

Reggie Cannon explains the pressures of playing in a stepping stone league to Europe’s top clubs.

Stock watch: Assessing the ups and downs of Americans abroad

John Brooks, Wolfsburg — On the rise

: Brooks has quietly been one of the top-performing Americans in Europe this season, commanding a Wolfsburg defence that has conceded just 19 goals in 19 Bundesliga games, the second-best mark in Germany’s top flight. In fact, Wolfsburg have not conceded a goal in five consecutive games over all competitions, with Brooks playing every minute during that span. The 28-year-old was reportedly available for transfers last summer, sources tell ESPN, but it would seem Wolfsburg are quite happy that they have held onto the American.

According to one German journalist, Brooks has formed an “ideal partnership” with newcomer Maxence Lacroix due to Brooks’ experience and Lacroix’s speed. If Brooks’ can replicate his recent club form with the national team, it would be a huge boon for the USMNT, as inconsistency has defined his international career so far.

: Thomas Tuchel confirmed after Chelsea’s win over Sheffield United on Sunday that Pulisic was omitted from the squad because of “family issues,” but the 22-year-old’s involvement under the new Blues boss has been limited to 84 minutes in four games.

Sources tell ESPN’s James Olley that the United States international’s diminished game time could be explained by a couple of reasons: the club’s medical staff are concerned that the United States international is at risk of suffering another hamstring injury, and Tuchel is keen to evaluate the squad at his disposal, already having a good understanding of what Pulisic offers after their time together at Borussia Dortmund.

Jordan Siebatcheu, Young Boys (on loan from Rennes) — On the rise

: If Siebatcheu is an unfamiliar name to you, it’s perhaps because he has never played for the United States at any level. The Washington D.C.-born forward, who on loan at Swiss giants Young Boys from Ligue 1’s Rennes, bagged a hat-trick last week to take his tally for the season to seven goals in 17 games for Swiss Super League leaders. While things didn’t work out for him initially at Rennes, sources tell ESPN that the French club remains quite positive about his future, expecting him to return and fight for a starting place next season.

The former France Under-21 international remains eligible for the United States and, in an interview with American Soccer Now last year, hinted he would be open to representing the Stars and Stripes. Given the USMNT’s uncertainty at striker, don’t be surprised if the in-form Siebatcheu receives a call-up from Gregg Berhalter soon.

: After surprisingly cracking Barca’s first-team out of preseason at the tender age of 19, De la Fuente has faded into the background a bit in recent months. The winger has managed just 26 minutes for Barca so far this campaign and thus has been turning out for Barca B recently to get playing time.

With Ronald Koeman adamant that youngsters need to play and gain experience, sources tell ESPN that if Barca can keep players fit, the plan now is for him to train with the first team in the week, join up with the B team on Friday or Saturday and then play for them at the weekends. Breaking into a star-studded Barca team was always going to be a tall task for the youngster, and next season Barca will have to decide whether it is best for his development to stay around the first-team again or go out on loan and get minutes.