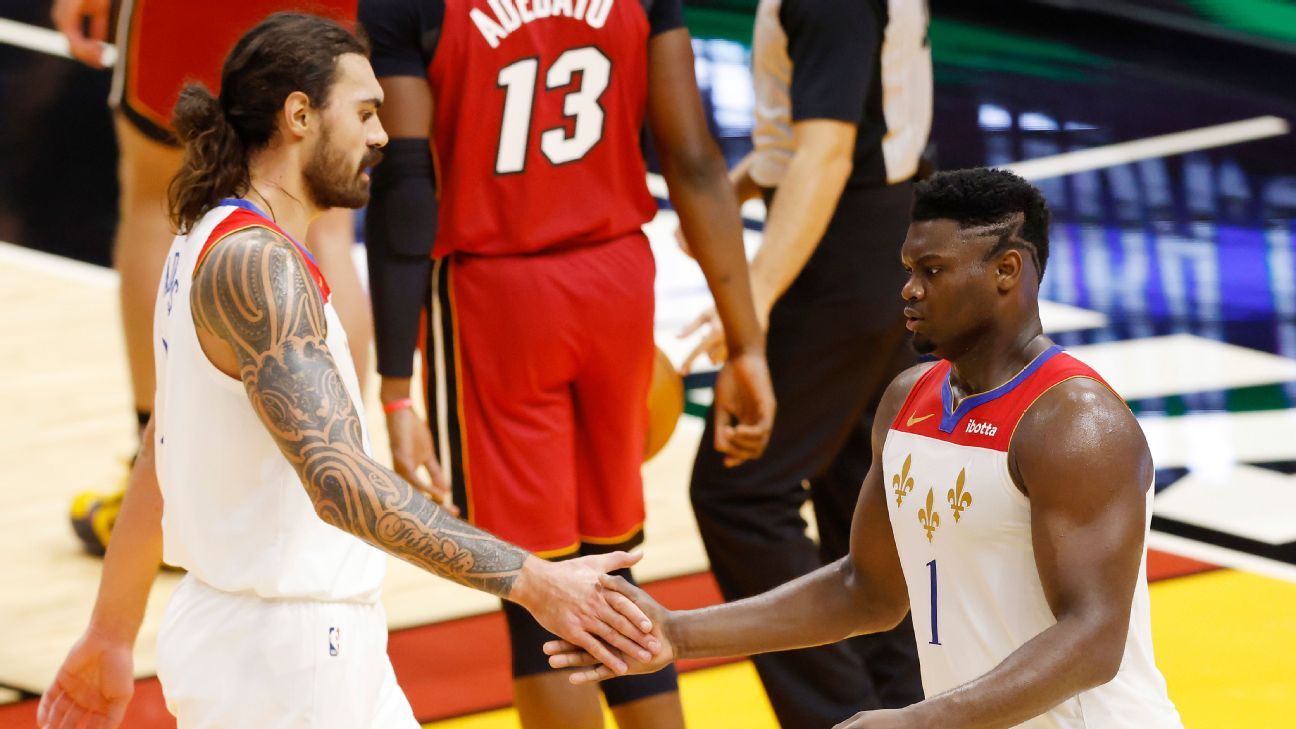 THE ONLY THING standing between Zion Williamson and the rim was Steven Adams.

It was the fourth quarter of Williamson’s 10th career NBA game, and the No. 1 overall pick had just caught the ball at the elbow. Adams waited just above the restricted circle, ready for contact. Someone was going to lose this heavyweight matchup.

Williamson took one dribble, met Adams in the middle of the lane and then buried his left shoulder into the center’s chest before stopping to pivot. The force drove Adams backward 8 feet to the baseline, clearing Williamson’s path to turn around and scoop in an underhand layup.

Few players can use brute force to have their way with Adams, who was voted the toughest player in the league by general managers in each of the past four seasons. But Williamson entered the NBA as one of the most hyped prospects ever by taking explosive playmaking to unprecedented levels during his lone college season.

“The dude’s explosive as hell,” Adams told ESPN. “He’s like 300 pounds or something, too. But he moves so quick.”

Nine months after their first collision, Adams and Williamson officially joined forces. A four-team trade that shipped out star guard Jrue Holiday also brought the New Zealand big man to New Orleans via the Oklahoma City Thunder. Together, the 6-foot-11, 265-pound Adams and 6-foot-6, 284-pound Williamson form potentially the strongest duo in the entire NBA — one that consistently unleashes pain on opponents and teammates, but one that is still finding its place in the modern game.

THE POWER BEHIND the Pelicans’ 549-pound frontcourt shows up in two key ways: screens and boards.

For years, Eric Bledsoe, a two-time NBA All-Defensive Team selection, had to deal with trying to get around Adams’ screens. He’s much happier now that he has Adams on his side. But in training camp this year, Bledsoe caught the wrong end of a screen from Williamson.

“That was pretty brutal,” Bledsoe said. “It sucked. It sucked. I think I was out for about three days.”

As a reserve guard, Sindarius Thornwell has the unenviable duty of having to go against the Pelicans’ starters in practice. That means he’s consistently on the other end of tough picks by both Williamson and Adams.

“They are probably two of the most physical guys in the league,” Thornwell said. “It ain’t fun going against them, though, when you get hit by one of those screens.”

Opponents, teammates, even team staff — no one is ever truly safe from the wrath of these picks. Prior to Williamson’s debut last season, the Pelicans had him playing 3-on-3 and 4-on-4 games against staffers, coaches and players out of the rotation in order to ramp his conditioning up to get ready to play in a real game. Multiple sources told ESPN that after one such session, a Pelicans’ staffer was sent to a local hospital to get checked out for a possible concussion because he ran directly into a Williamson screen, eating a faceful of arm in the process. (The staffer was OK).

“That would be pretty annoying,” Adams said with a chuckle.

Just as impressive has been Williamson’s and Adams’ ability to gobble up boards, especially on the offensive end. After middling rebounding numbers a season ago, the Pelicans find themselves near the top of the NBA: fourth in offensive rebounding rate (29.8%), sixth in defensive rebounding rate (75.1%) and fourth overall (52.3%). When Williamson and Adams are on the floor together, the numbers become even more ridiculous — jumping to 33.4%, 76.3% and 55.4%, respectively.

For some opponents, the counter is to send five guys crashing the class to offset Williamson and Adams. For others, the task is simple: Prepare for battle.

Most NBA starting lineups feature only one intimidating force up front. Adams-Williamson’s best challengers likely come from Indiana (Domantas Sabonis and Myles Turner), Los Angeles (Marc Gasol and Anthony Davis) and Milwaukee (Giannis Antetokounmpo and Brook Lopez), yet none of those duos quite combine for the same levels of size, explosion and power.

“Man, Steven is strong,” Williamson said on the first day of training camp. “Like, I thought I was strong, but, you know, like seeing it up close, like, on the same team now, it’s crazy.”

Now the issue for New Orleans is turning all of that force into a strength.

THE PELICANS ARE having a rough season. They come into Tuesday’s game ranked 12th in the Western Conference with trade talks surrounding many of their veterans. As New Orleans’ chances of moving up into the play-in race slip, the likelihood that this roster looks different next year only increases.

Yet Williamson is locked in as the franchise centerpiece, and Adams signed a two-year extension following the trade. Making this enormous duo work is a priority — one the team was optimistic about heading into the season.

“Find me a 4 and 5 together anywhere in the league that’s as physical as those two guys,” Pelicans coach Stan Van Gundy told reporters in training camp.

“When we made that trade, I said, ‘Look, the one thing I know for sure: You might come in here and shoot the ball great. You might find a way to beat us. You’re not punking the New Orleans Pelicans ever with those two guys next to each other.”

The inconsistent Pelicans have in fact been punked at times on their way to a 10-12 record, though their starting frontcourt provides some reason for optimism. New Orleans’ minus-1.0 overall net rating improves to plus-5.6 with Williamson and Adams on the court. The duo helps provide sturdier defense, more efficient offense and an overall spark.

Whenever Adams dives on the floor, he’s the favorite to come out of the scrum with possession. Once he gets his hands on the ball, it’s hard to pry it loose from his grip — one reason he’s tied for the team lead with 23 recoveries this season.

Williamson showed off his strength in his first summer league game when he ripped the ball away from New York Knicks forward Kevin Knox II and slammed it home. The Pelicans still use a clip of him snatching the ball away from two-time MVP Antetokounmpo in one of their fourth-quarter hype videos played at the Smoothie King Center.

His most recent feat of strength: bending rims.

In Friday night’s game against the Indiana Pacers, Williamson needed just one dribble to explode to the lane with Pacers center Goga Bitadze waiting at the rim. Bitadze got a piece of the ball — and possibly Williamson, too — but Williamson still grabbed the rim with such force trying to flush the slam that he temporarily shut the game down.

“Once the refs told us what the delay was, I don’t think anybody was surprised,” Pelicans guard Lonzo Ball said afterward. “At the end of the day, you know, he can break a rim anytime.”

But bruising picks and reliable rebounds can only get you so far. New Orleans is still looking for ways to unlock one underrated part of the partnership: Adams’ passing.

“When you give [Adams] the ball at the elbow and let him run dribble handoff and make the high-low feed to [Williamson] and work that in both directions,” said New Orleans executive vice president of basketball operations David Griffin, “our thought was that their skill sets could work together.”

That’s one case for the Pelicans bouncing back in a league now dominated by 3-point shooting and switchability. This isn’t a bully-ball pairing camping out on the blocks and clogging the lane.

“The comparison shouldn’t be the two bigs, say traditional, like the average team back in the day,” Adams said. “It’s still a bit different from that … even when [Williamson is] on the perimeter and stuff, he still has a natural gravity to him.”

The ceiling for this duo is still a mystery, especially given Williamson’s potential to play center himself. But there’s one thing Adams is certain of.

“Oh I still think he’s stronger,” Adams said with a laugh. “[Williamson] is definitely more impressive than me, yeah.”