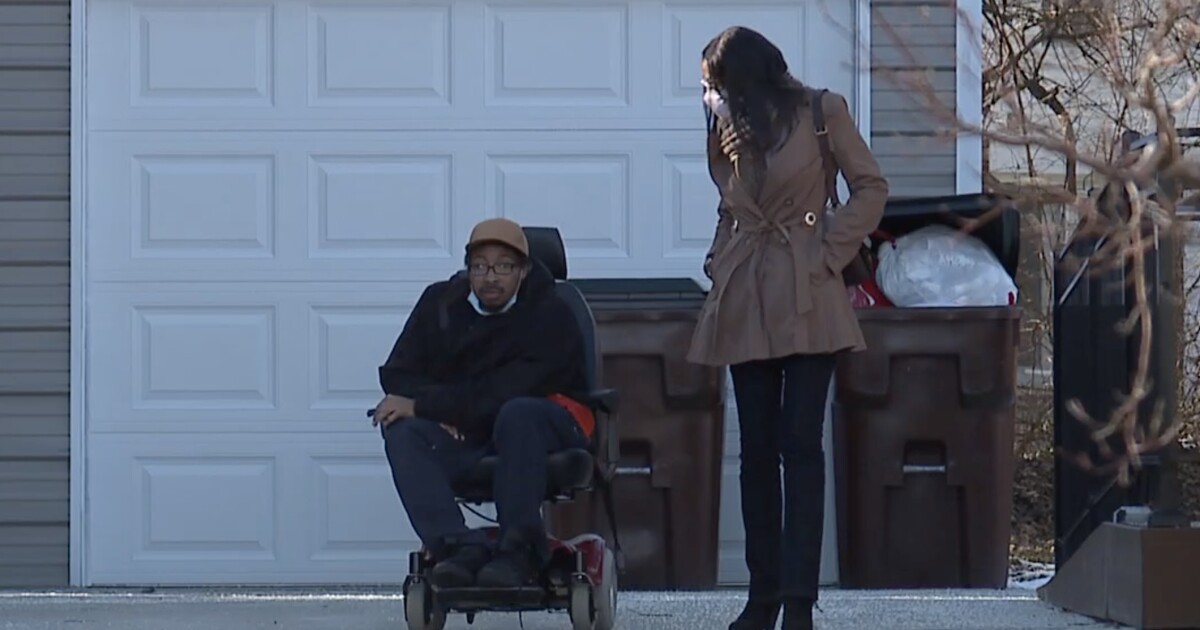 
On Sunday, WCPO reported on Gregory Washington, his mother Andrea and a broken wheelchair. By Sunday night, the Greater Cincinnati community responded in droves, reaching out to the station asking for ways to help.

“It’s like, what can we do immediately?” said Rev. Dr. Johannan Tate, pastor at Jerriel Missionary Baptist Church in the West End. “We want to solve this issue immediately.”

Andrea said Sunday night she really hoped Medicaid would step up to the plate and work with her on fixing Gregory’s chair. Medicaid did respond to WCPO’s request for comment and said customer service would reach out to Andrew.

But community members said that wasn’t good enough — they wanted to help get Gregory a new chair and get it for him fast:

“Boy, bells just went off and I thought, ‘Oh my gosh, now I know what we can do to help somebody,'” said Bob Sears, who lives in Hidden Valley Lake in Indiana.

“I reached out because that was just, it spoke to me I couldn’t let it go,” said Kristen Hess-Winters, owner of InFocus Real Estate Group in Clermont County.

“I got emails and calls from all staff and volunteers, everybody was like ‘Oh my God, we got to reach this family,'” said Rob Seideman, executive director of May We Help, a nonprofit organization aimed at helping differently abled folks obtain devices and tools they need — even if it has to be specially designed.

Repair companies said the fix for his other chair — which still isn’t truly sufficient and lacks the support Gregory needs to help him stay upright — would run the family more than $600. Gregory wouldn’t complain about his loaner chair, but did say the posture it forces on him does hurt, after one month of use.

“It’s admirable that mom and dad really wanted to solve it through the Medicaid system, but in instances such as these, I just believe that there needs to be a more immediate response,” said Tate.

He said he and a group of pastors are ready with money for the chair, and anything else the family needs.

Hess-Winters said the real estate agents at her company contribute to a community fund every time they close a sale, for needs just like this one.

“We get it, this isn’t just this joystick,” she said. “The expense and the time that she has to give to his care can be overwhelming and this is just a small portion of something that people in the community can help her with.”

Sears, a retiree, is ready to load up his old chair and drop it off for the family at any moment.

“Having experienced stage four Parkinson’s, I related in a big way,” he said. “Let her know that this gift was from God, and it would make me feel just wonderful for him to have this chair.”

For Seideman and his team of volunteers, inventors and physical therapists, this is another family May We Help is specially suited to serve. The team takes donated equipment and customizes it for people, to fit the unique individual needs of its future owner.

“That’s what we do every day, all day long, and even if Medicaid were to eventually come through, then he could give the chair back and we can give it to another family that would benefit,” said Seideman.

On Sunday night, Andrea said she’d speak with her family about the outpouring of support and requests for links to donate or provide help, but she didn’t intend to receive help this way: She just wanted to warn families like hers about their struggle with Medicaid.

After a full day of emails, calls and messages pouring in from viewers, Andrea said she’s very thankful. She plans to tell Gregory about the community rallying behind him later in the evening.

“Very confident and have a very good feeling that everything is going to work out just fine,” she said.

Unpaid rent is piling up. Landlords can’t hold on forever