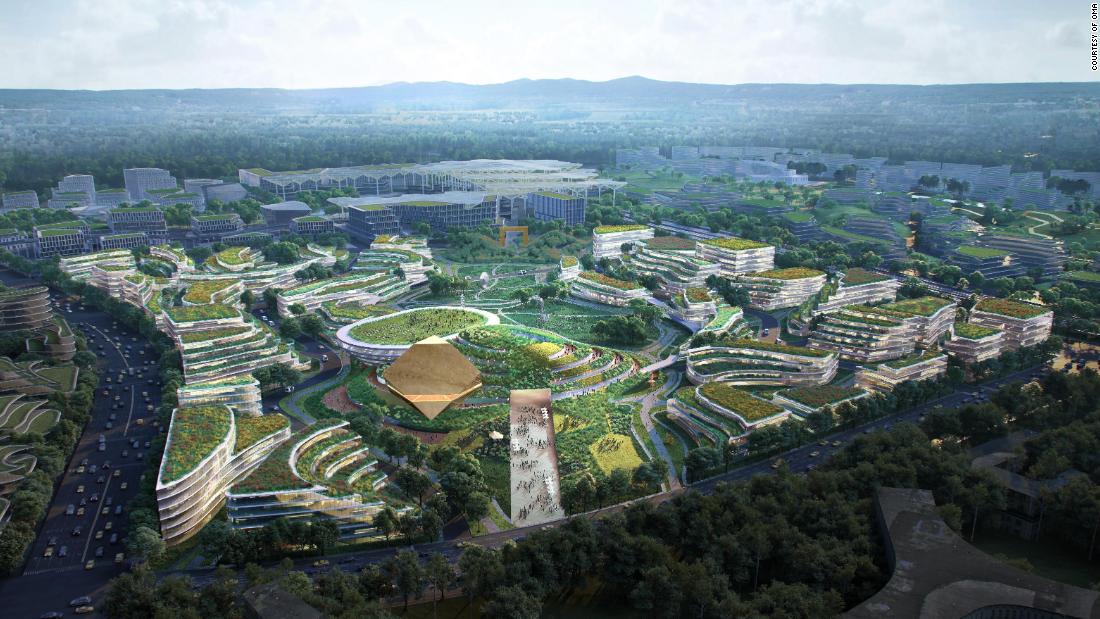 A new “future city” is set to spring up in southwest China, featuring an urban design intended to combine industry and technology with the pastoral beauty of the countryside.

The 4.6-square-kilometer (1.8-square-mile) site outside Chengdu, the capital of Sichuan province, will be home to multiple new universities, laboratories and offices, according to the architectural firms behind the project, Office for Metropolitan Architecture (OMA) and Gerkan, Marg & Partners (GMP).

Known as Chengdu Future Science and Technology City, the project was unveiled last week via a series of digital renderings. The development is being built in a rural area close to the forthcoming Tianfu International Airport, which is set to open later this year and will make Chengdu only the third Chinese city, after Beijing and Shanghai, to be served by two international airports.

OMA’s design for the educational park features curvilnear buildings with green terraces that complement the topography of the hilly landscape. Credit: Courtesy of OMA

OMA, which designed Beijing’s eye-catching CCTV Headquarters nearly a decade ago, is responsible for a 460,000 square meter (nearly 5-million-square-foot) section of the new city, home to various educational facilities, known as the International Educational Park (IEP). GMP, meanwhile, will lead the design of a series of public spaces and transport facilities in an area dubbed the Transit Oriented Development (TOD).

The two architecture firms were appointed based on separate entries to an international design competition.

Digital renderings of the educational park show a sprawl of buildings with greenery on their roofs, curving in layers like the topography of terraced rice paddies. The buildings, which include university buildings, dorms, national laboratories and offices, mimic the hilly landscape to form a valley, with a 80,000-square-foot building nestled at its center.

The campus was based on the natural surroundings rather than the needs of car traffic, said OMA partner Chris van Duijn, who leads the firm’s Asia projects.

“Masterplans in China are typically based on infrastructure and quantities … the local topography (is) often ignored,” said Van Duijn over email. “The result is that many masterplans throughout China look very much the same and opportunities to develop cities with local characteristics are missed.”

GMP’s plans for its transit hub include overhauling an existing subway station and building a sculptural rotating viewing platform called the Eye of the Future.

A crop of new cities

Chengdu’s new outpost is among a number of “future city” projects currently under construction in China. Rapid urbanization in the country has led to population caps in major metropolises like Beijing and Shanghai, while the Chinese government projects that around 1 billion people will be living in its cities by 2035.
To manage the overflow, officials are funneling money into new satellite cities like Xiongan, which is being built just over 60 miles from Beijing and is expected to be home to 2.5 million people. And last June, plans were unveiled for the car-free “Net City” in Shenzhen, which will be roughly the size of Monaco and is being built by tech conglomerate Tencent.

The forthcoming Future Science and Technology City is not the only large-scale urban development being built in Chengdu. Also under construction in the Tianfu New Area, where the city’s new airport is located, is the so-called “Unicorn Island,” a technology hub designed by Zaha Hadid Architects.

The Eye of the Future is a hexagonal rotating viewing platform. Credit: ATCHAIN

Van Duijn said OMA anticipates that the first parts of its new project will be completed by the end of 2021, with the wider site finishing within another two years.

“Despite decades of urbanization in China, the repertoire of urban planning is still very limited. It seems we have only two conditions: it is either a city or it is a rural area. But as cities have expanded … people are also becoming interested in alternatives,” he said.

“The project is not a typical urban project nor a landscape preservation project, but we hope to provide multiple ways in which city and countryside can both coexist and provide another type of urbanized development.”

Trump impeachment: Senate says trial is constitutional and can go ahead