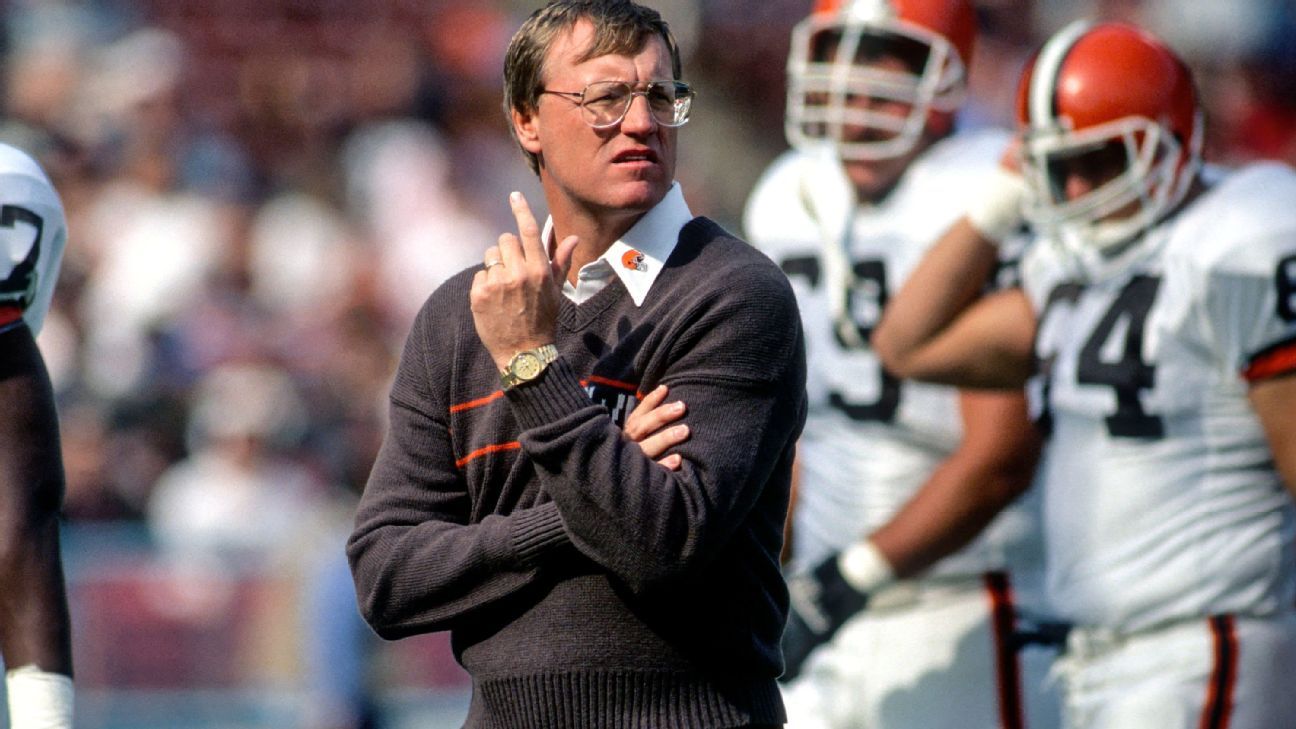 “I think we all just assumed that the gleam was the shine off the Super Bowl trophy,” the former Cleveland Pro Bowl defensive tackle under Schottenheimer said Tuesday. “But it was something that just said, we’re working together, there’s something waiting at the end of this, that we’re just absolutely driving for — that gleam.”

Schottenheimer never did win a Super Bowl. But the gleam was never just about a trophy anyway. It was about the journey — the wins and the losses — and the relationships forged along the way.

Monday, Schottenheimer died at the age of 77 after suffering from Alzheimer’s disease since 2014. He was moved to a hospice on Jan. 30. Schottenheimer remains the eighth-winningest coach in NFL history, which included a magical 44-27 run with the Browns from 1984 to 1988.

As his former Cleveland players remembered Schottenheimer this week, they kept coming back to another gleam.

“In our 20s, we didn’t understand the emotion and the tears that came out of his eyes while he was talking to us,” former Browns quarterback Bernie Kosar told ESPN Cleveland 850 AM on Tuesday. “But that genuine emotion that he was able to transfer over to me as a player, that competitiveness that me and him had towards a common goal. … it’s just really still glowing and burning within my belly today, that love and fire, and that love of competition, that love of practice, that love of competing that Marty Schottenheimer built within all of us.”

Golic too remembered that gleam well.

“You could see the emotion in him,” Golic said. “I remember being in the locker room after games and he’d get going and his eyes would well up with tears. And I remember one time leaning over to [former Browns linebacker] Clay [Matthews] and saying, ‘Did we win or lose?’ He would cry either way. He would cry joy. You would see tears in his eyes for joy. You would see it for failure. But it wasn’t like, feel bad for us. It was this feeling that we as a team worked hard, did our best and came up short. And I loved that.”

Schottenheimer suffered excruciating losses in the playoffs throughout his career, including, notoriously for Cleveland, “The Drive” and “The Fumble” in consecutive AFC Championship Game defeats at the hands of John Elway and the Denver Broncos. Yet Schottenheimer kept coming back. And while he coached them, so did the Browns.

“I never won a Super Bowl — I would have loved to — but it’s not something that’s dragging me down,” Golic said. “I played because I loved the game And I really got that same feeling from Marty. He wanted to win for everybody, but he enjoyed coaching and loved what he was doing.”

That even included the practices, which were always intense and physical.

• Johnson believes in science of cannabis
• Pats proud to be last SB repeat
• What do 49ers do with their 40 FAs?
• Would Jets regret trading Darnold?
• Would Dallas take a QB with No. 10?

“He helped us develop into better players by demanding that we practice how we played,” former Browns running back Kevin Mack said. “We were pretty close to game speed. And it made games easier for us once we got out there.”

But Schottenheimer also knew how to motivate his players, challenging them while subtly building them up at the same time.

Before his rookie season in 1985, Mack recalled being nervous before a preseason scrimmage in Buffalo.

“I was terrified,” Mack said. “But right before the scrimmage started, he just came over and was like, ‘I can see you’re a little uptight. Rest assured, you belong here. You’re better than probably 80-90% of the guys on the field. Just go out and have fun.’

“I don’t even know how he knew I was nervous. But with him saying that, that really struck home with me. My Little League coaches and high schools had always told me to have fun. Marty saying that helped me relax.”

Mack went on to have a big performance in the scrimmage, then rushed for more than 1,000 yards that season, as the Browns made the playoffs, igniting their run through the end of the decade.

“He was a great coach,” Mack said. “Always looking to get the best out of his players.”

Many of those players returned to Cleveland for a 30-year reunion of the 1986 team, which came one overtime away from advancing to that elusive first Browns Super Bowl.

Schottenheimer was already battling Alzheimer’s, but still made the trip, as well.

As the team was introduced onto the field, Schottenheimer and Kosar were the final two to walk to the 50-yard line.

“For him to look over at me and to tell me thank you and say how much he loved me with all the emotions and memories that me and him had on that field, in that moment…” Kosar said. “That gleam of his eyes, still then, even with this tragic, sad disease … had already taken effect on him and his body — yet he still had that beautiful gleam in eyes.

“And that’s what I’d like to just keep remembering — that gleam in Marty Schottenheimer’s eyes.”

Covid: WHO backs Oxford vaccine 'even if variants present'