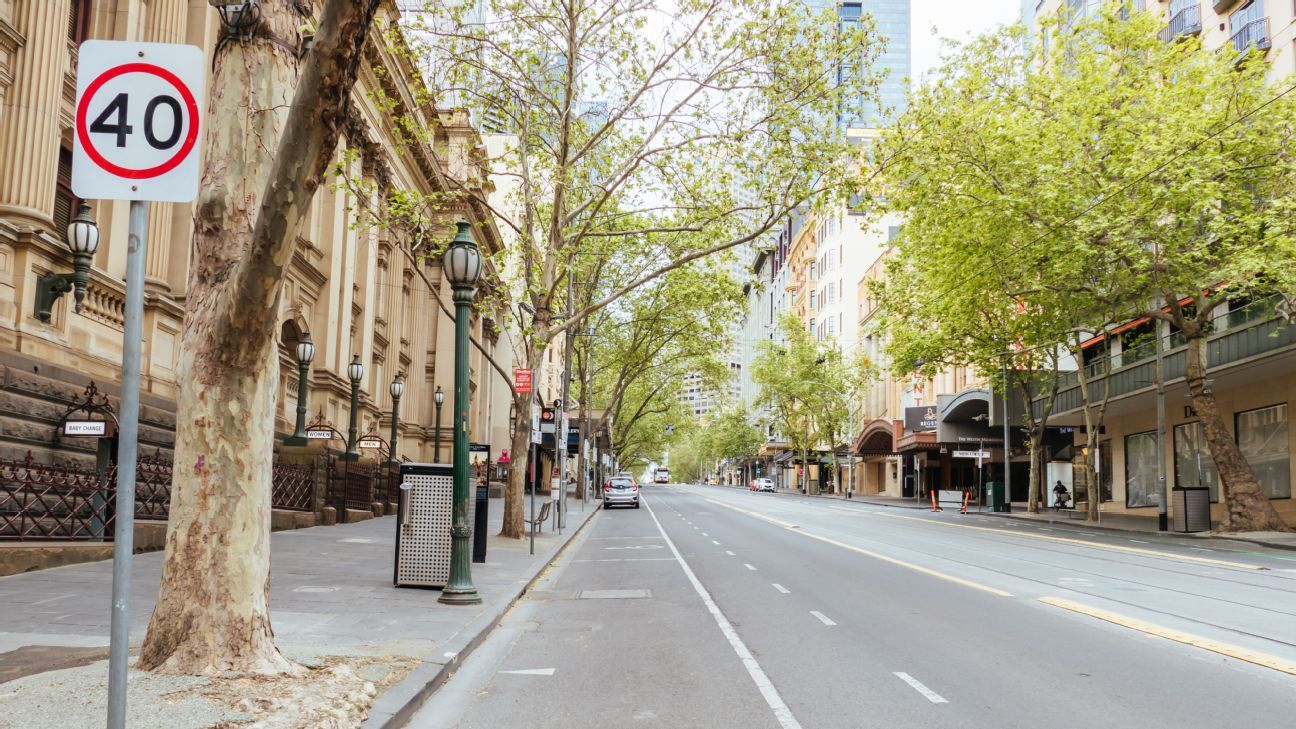 
MELBOURNE, Australia — A little over 12 months ago, Novak Djokovic had been crowned Australian Open champion for the eighth time, American upstart Sofia Kenin secured a maiden Slam win, millions of dollars had been raised for Australia’s bushfire relief fund and the tennis season was just getting underway. And then the COVID-19 pandemic took the reins.

What started as a peculiar topic of conversation around the Australian Open water coolers quickly became one of slight concern with the virus starting to spread faster than many had anticipated.

Three weeks after the world’s best tennis players descended on Melbourne, one of the city’s other showpiece international events, the Australian Formula One Grand Prix, was spectacularly canceled on the morning of Friday practice, leaving fans, organizers, teams and drivers at a loss.

The coronavirus had spread to Australia, as it had to many other parts of the world. In Italy, morgues were overflowing, emergency rooms were filled to capacity and there were worrying shortages of masks and other personal protective equipment.

Sport wasn’t immune. The NBA season was suspended, soccer players in Europe were testing positive for the virus, throwing leagues into chaos, and Australia’s own winter sporting codes lasted just one week before being brought to a halt.

Australia’s federal government closed its international borders soon after, allowing only returning citizens and those with a valid reason to travel to Australia into the country. A “hotel quarantine” program was implemented by the states, whereby returning travelers were put up in hotels for a mandatory 14 days, unable to leave their room until the two weeks had passed.

Australia had a decent grip on the virus, while many other nations around the world struggled. In March, Australia was contending with around 300 daily cases, but the widely successful quarantine program had that down to single figures by May.

But in mid-June, an outbreak stemmed from a hotel manager catching it off a returned traveler, and cases spread rapidly from there, with numbers rising from single figures per day, to dozens, to hundreds.

On July 21, 721 cases were recorded in Australia — almost every single one in the state of Victoria. It became the flash point for the state — and the nation’s — response to the crisis.

Victoria’s state government initially tried locking down close-quarters social housing, where a concentration of cases were found. Then came postcode lockdowns, but eventually it was announced that a metro-area “hard lockdown” was the way to go to end the spread in Melbourne.

Masks were made mandatory when leaving one’s house, while people could leave only for “four essential reasons” — care, shopping for groceries and medicine, an hour of exercise, and to go to (essential) work.

A curfew was then put in place between the hours of 8 p.m. and 6 a.m. Residents couldn’t travel beyond a 5-kilometer “bubble” around their place of residence. Visiting friends and even family (outside of one’s own household) was forbidden, with harsh fines handed to those breaking the rules. It was, at the time, one of the world’s harshest lockdowns.

Initially it was thought the hard lockdown would last for two weeks — a “life cycle” of the virus. But two quickly became four, which quickly became “indefinite.” The city centre was a ghost town, during the day and at night. Restaurants were closed, except for delivery and takeout. Non-essential retail shops were closed, forced to move online. Gyms, swimming pools, golf courses and tennis courts were shut down. Melbourne’s iconic trams, buses and trains — though still running — were empty. Streets were deserted.

The mood was not much different from how millions of others around the world have reacted to the pandemic. People who were extremely upbeat were shadows of themselves on Zoom calls or social media, while frustrations ran rampant underneath news stories detailing case numbers, government responses and the social side effects of the lockdown. As the situation expanded from weeks to months beyond what was initially promised by the government, apathy began to set in — Melburnians missed their families, their friends — a “normal” life. Confined to their homes for 23 hours a day, every day, it was energy-sapping and mentally exhausting.

Sport had abandoned Melbourne. Its Australian-rules football teams, its rugby and soccer teams were all forced out of the state. Stadiums lay dormant. It was eerie. Victoria faced an uphill battle that had been lost many times over in many parts of the world.

It wasn’t without vocal opposition to people’s freedoms being taken away, but a vast majority of Victorians set aside personal liberties for the greater good. The government offered financial assistance to businesses and workers who were forced to shut as a result of the lockdowns.

The people dug in, and a parochial sense of belonging to Melbourne emerged. Restaurants offered delivery packs with vacuum-sealed goodies designed to emulate the experience of eating out. Small businesses offered same-day delivery on items, and delivered goods themselves to stay afloat. Home workout routines did the rounds on social media and gym equipment sold out across the state.

The people also rode the wave of emotions that came with every daily COVID-19-related news conference, fronted by Premier Daniel Andrews. With a spike in numbers, the anguish, sadness and anger came out, and it was hard not to feel the negativity.

To put it into perspective, on the same day (July 21) that Victoria (and Australia) recorded 721 cases, France recorded 584.

In Victoria, things started to get better, slowly. The tough measures were working despite fierce opposition from some parts of the media, the state’s political opposition party and the federal government. It was the collective efforts of 5 million Victorians that ensured that case numbers went from being on an almost exponential trajectory in July, to consecutive days of “zero new cases, zero deaths” by mid-October.

When Victoria tentatively reopened hospitality and non-essential retail in late October, the state had recorded zero new cases twice in that week.

Melbourne had put the coronavirus in check and on its way to having what the Premier described as a “COVID-normal summer.”

And thus begun the city’s rebirth. Melburnians were allowed back at restaurants, at the pubs and cafes, in limited numbers and for limited times. Ordering food at restaurants was widely done by QR code, masks were worn to tables and then could be set aside, and everyone had to check in wherever they went, in order to help the local contact tracers in case of an outbreak.

But the Band-Aid wasn’t ripped off in one go. The state government lifted its restrictions in segments; while restaurants reopened, having visitors to one’s house was still restricted to just two adults per day, as modeling had shown the virus was more likely to spread in the home where people were a lot more laid-back and in closer proximity.

On Nov. 24, the state recorded zero active cases of the virus for the first time since Feb. 29. And while cases have popped up every now and then since December, the city has enjoyed its “COVID-normal” summer, complete with concerts, music festivals, packed bars and clubs, and once again crowds at sporting events.

While some of the world’s best tennis players have complained about hotel quarantine, or the tough measures they’ve had to face since entering Australia, it’s little wonder Melburnians in particular haven’t offered much sympathy. They’ve done the work — put in the hard yards — and are now reaping the benefits.

The overwhelming sentiment has been that those who don’t want to adhere to the state’s grueling hotel quarantine measures in order to enjoy a “normal” Melbourne are welcome to remain where they are. After all, there are thousands of stranded Aussies pleading with governments to open up more quarantine rooms for citizens stranded overseas.

Australia’s death rate stands at roughly 1 in every 28,000 people. Fewer than 1,000 people have passed away from the coronavirus. The USA’s rate throughout the pandemic is around 1 in 870 people with more than 460,000 deaths.

Yes, people are wearing masks, hand sanitizing stations are at every corner and there is a 30,000-person cap on crowds per day, but the 2021 Australian Open isn’t vastly different than last year’s. There are lines for ice cream and food trucks. The sun is shining. Melbourne Park looks normal, a testament to the population adhering to the restrictions.

The atmosphere also feels normal, in a sense. Months ago, Melburnians might not have expected the tournament to go ahead at all. But what has eventuated is a safe, welcoming and familiar experience.