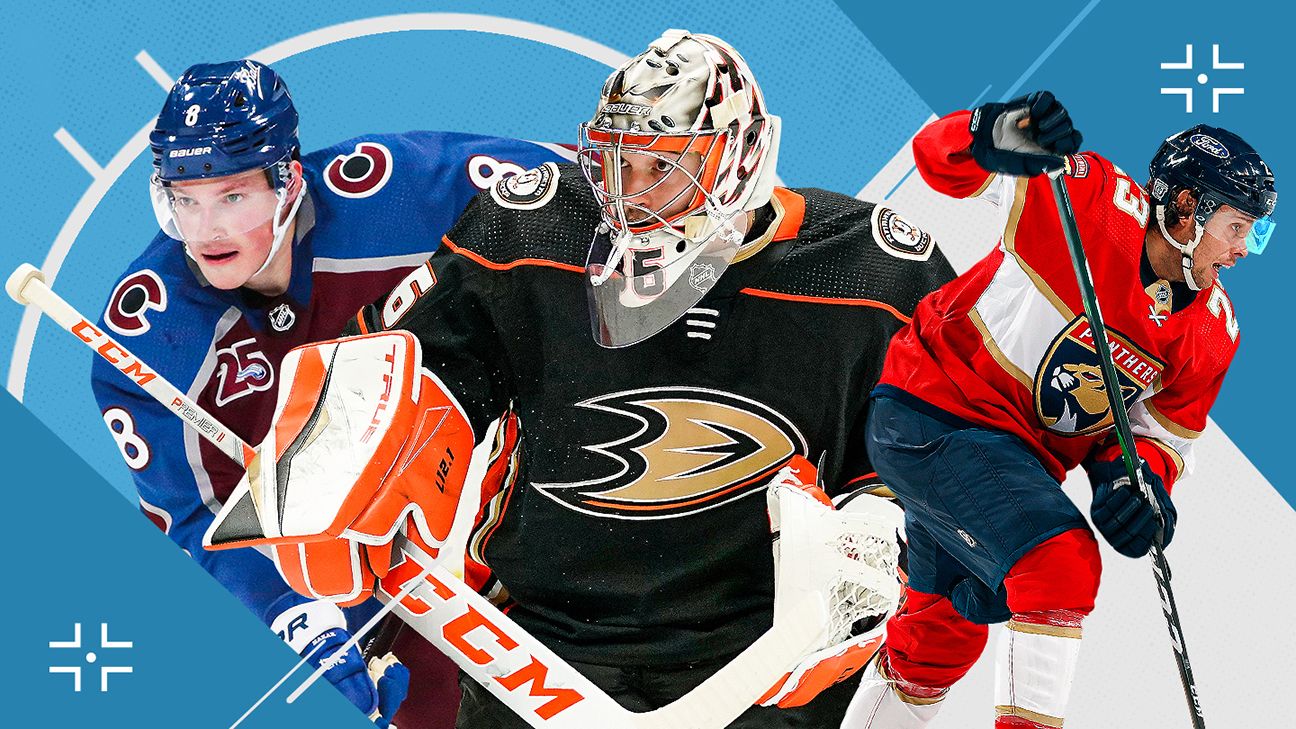 
We have reached the quarter mark of the 2021 NHL season — at least for the teams that haven’t had their schedules disrupted by COVID-19 yet.

But we’re also coming up on another big holiday. So in the spirit of Valentine’s Day, we identified something we love about every team in this week’s edition of the Power Rankings.

How we rank: The ESPN hockey editorial staff submits selections ranking teams 1 to 31 — taking into account game results, injuries and upcoming schedule — and those results are tabulated in the list featured here.

Note: Previous ranking for each team refers to our Week 3 edition, published on Feb. 2. Points percentages are through the games of Feb. 9.

Who is having a better start: Auston Matthews, who leads the NHL with 11 goals in 12 games, or Mitchell Marner, who has 21 points through 13? That’s a trick question; it doesn’t matter. It’s awesome to see the pair of 23-year-old stars shine together.

The Bruins’ culture is worth praising. Amid an external expectation that Boston was nearing regression — the end of an era for the veteran core — the Bruins are proving that it’s going to be hard for other teams to tear down what they’ve built.

There’s a lot to love about the Golden Knights’ start so far, but perhaps the best thing is the way they close out games. Despite opponents having a slight edge in the second period, Vegas has outscored teams 15-8 in the third period this season.

As hockey fans, we know that as much fun as everyone’s having with the Tompa Bay narrative — suggesting the city became winners when Tom Brady came to town — the Lightning were building a juggernaut the right way long before the quarterback arrived.

The Habs love themselves this season — and to be clear, there’s nothing wrong with that. But a loss to the lowly Senators last week kept their egos in check. “It keeps us humble,” Phillip Danault said. “It just shows us any team can beat us — any team that works harder.”

We’re obsessed with all the great Philly comebacks: Oskar Lindblom (beat cancer this summer), Nolan Patrick (missed all of last season with migraines), James van Riemsdyk (playoff scratch to being the team’s leading scorer) and Sean Couturier (two goals, one assist in first game back since costochondral separation).

While Philipp Grubauer is operating on a whole different level to start the season, let’s be honest: The man breaking ankles and stealing the spotlight for the Avs has been sophomore Cale Makar.

Cale Makar has been so damn good this season pic.twitter.com/MpiEJGYKz6

Robert Thomas is going to be out until at least March (broken thumb), which is a bummer. But it reminds us of why we admire the Blues: It’s their commitment to a next-man-up mentality. “This is what the team is built on,” Brayden Schenn said this week. “Depth.”

What we adore about the Capitals: As accomplished as they are, and as hefty as their expectations are for themselves, they’re always down to have fun. Like wearing a goofy Cobra Kai-themed headband that your coach ordered online, and totally embracing it.

Let’s appreciate that the Canes, under coach Rod Brind’Amour, are the manifestation of grit. Vincent Trocheck, acquired at the deadline last season, seems to be vibing well; he took a puck to the face on Saturday, then was credited with two goals afterward.

We adore Anton Khudobin — the affable and highly capable Stars goalie — as much as anyone, but it doesn’t mean he’s immune to the classic benching for oversleeping a practice. Glad it was only a one-game discipline.

Carter Verhaeghe was a cap squeeze out in Tampa Bay, giving him an opportunity to sign in Florida for a bigger opportunity. Verhaeghe has practically doubled his ice time this season, and has nearly as many goals (six) in his first 10 games as he had in 52 games last season (nine).

There’s something quite admirable about a coach standing up for his players, especially against perceived injustice. Find yourself somebody who talks about you like the way Paul Maurice talks about Blake Wheeler when the media comes questioning.

Paul Maurice responds to the criticism that Winnipeg Jets captain Blake Wheeler has received, saying he’s been in awe of Wheeler’s work ethic and character since he got here. pic.twitter.com/Tlx5KHuDuG

Love that the Blue Jackets are responsible for their fair share of juicy drama. The NHL admits it erroneously awarded a goal to a Columbus opponent, John Tortorella benches another star (Patrik Laine, whom the team just landed in a blockbuster trade) and Mikko Koivu suddenly retires … all in one week.

For the second straight season, the Penguins have had a young defenseman blossom before our very eyes. In 2019-20, it was John Marino. Now, it’s 21-year-old Pierre-Olivier Joseph making massive strides on the blue line.

As much as you hate the overreliance on the team’s superstar duo, you do love the fact that two of the best players in the world are being showcased every game. Connor McDavid and Leon Draisaitl were on the ice for the final 5:45 of Battle of Alberta, Round 1 on Saturday.

Love that it’s so easy to write off the Islanders after a middling start (like the one they’re having) and know very well they are going to look like a dangerous defensive juggernaut by spring, ready to make a playoff run. It’s like clockwork.

Conor Garland is an undersized winger who was passed over in his first draft year, made less than $800,000 last season, and still leads the Coyotes in scoring thanks to a tenacious work ethic. You love to see it.

The Wild will remain on a COVID pause this week, thanks to a cluster of cases. So let’s take a moment and recognize the hot start for Jordan Greenway. The 23-year-old has leveled up, and leads his team in points (10).

We’ll always love a team that works hard but doesn’t take itself too seriously, like the Devils. Lindy Ruff is a hero for recognizing defenseman P.K. Subban after New Jersey’s last game for his “first game without being minus.”

ICYMI: our coach is savage.pic.twitter.com/InKKphxlPu

Things aren’t always consistently smooth in Calgary, but we love a good redemption story. After a not-so-great 2019-20, Johnny Gaudreau is looking like Johnny Hockey again, scoring seven goals in his first 11 games.

• Who will be the top pick this summer? »
• Early top-32 prospect rankings »
• How COVID-19 will impact evaluations »

Here’s a thing we didn’t think we’d be saying about the Blackhawks: Their power play is good. Like maybe really good. Chicago is fourth in efficiency (31.6%), and has 18 power-play goals already.

Let’s gush about one particular Duck: John Gibson, who is often burdened by very little help. But to start the season, it felt like the 27-year-old goaltender was single-handedly keeping the team competitive.

The Sabres don’t know when they’ll play hockey again after a ninth player (plus coach Ralph Krueger) ended up on the COVID-19 protocol list. So it’s a good time to read this story by Chris Peters, on expectations vs. reality for top picks, like Rasmus Dahlin. Spoiler: He’s still on track to be great!

The Rangers had scored only 17 goals at 5-on-5 entering this week’s game against the Islanders. The silver lining? Rookie K’Andre Miller has been on the ice for nine of them.

You have to love how passionate Canucks fans are. Sure, Vancouver is a little leaky on D, but the fan angst is at a level where it feels the Canucks will never, ever defend well in their existence as a team, ever again.

The Kings have shown some promise, but they’ve been derailed by injuries, so it’s hard to see their true potential. Even still, Cal Petersen has had a gem of a start; the 26-year-old sure looks like Los Angeles’ goaltender of the future.

Brutal honesty: There’s not a whole lot to love about the Detroit Red Wings this season, besides not being quite as bad as last season. But they do have a sick uniform set.

Even if the Senators feel like the only Canadian Division team without a chance at making the playoffs, they’re still worth watching every night. Watching rookie Tim Stutzle shine is one of the reasons to do so.