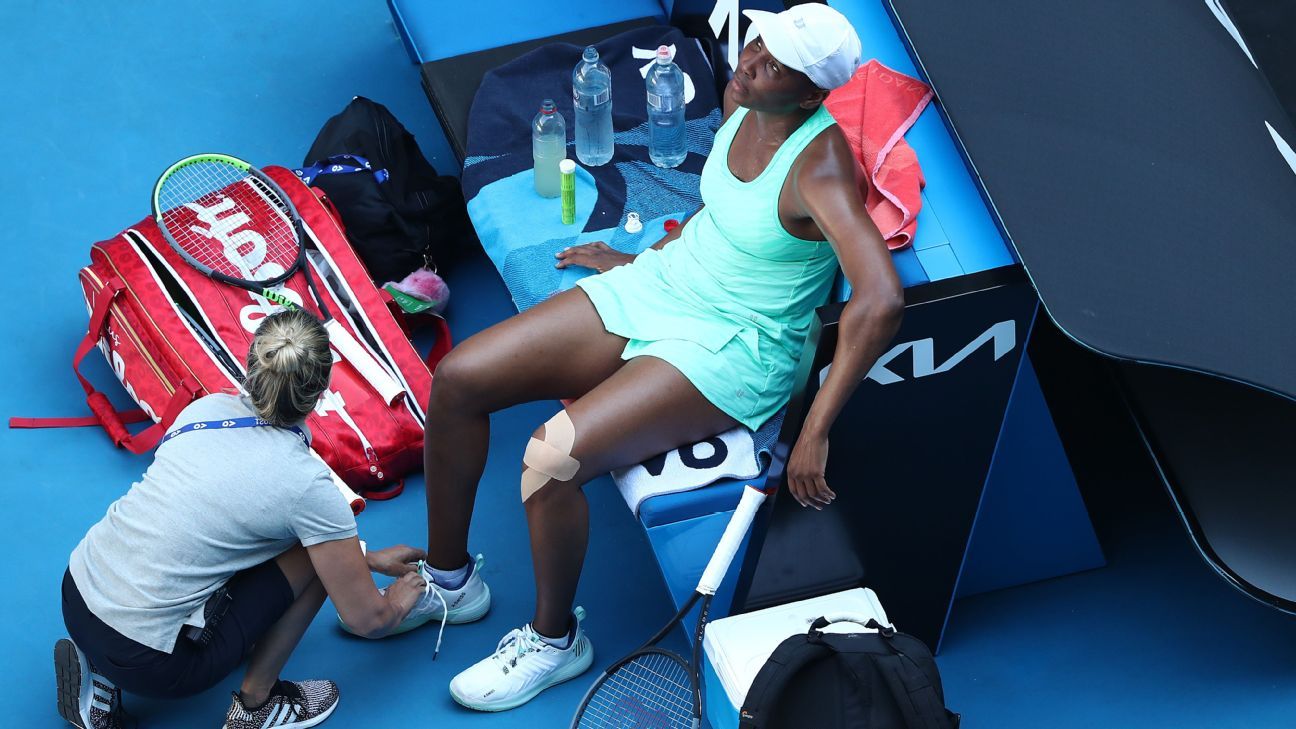 
When asked earlier this week about her legendary journey in professional tennis that has spanned over 25 years, Venus Williams took a moment and reflected on what was most important to her.

“I’m trying to get better every day,” she said Monday after her first-round victory at the Australian Open. “I think that no matter what happens to you in life, you always hold your head up high, you give a hundred million percent. That’s what I do every single day. That’s something that I can be proud of.”

Her words seemed to foreshadow what would come next.

Trailing 5-1 and serving to stay in the first set of her second-round match against Sara Errani on Wednesday, Williams rolled her right ankle while approaching the net for a return. She yelled out in agony and hobbled her way around the court as she tried to manage the pain. The tournament’s medical staff was called and she fought back tears as they examined the injury and gave her the treatment options. Already dealing with a nagging left knee injury heading into the Slam, medical staff taped up the ankle and reinforced tape she already had on her left knee during back-to-back medical timeouts lasting over 15 minutes.

Back in the second round at a major for the first time since 2019, she was determined to continue playing. Venus struggled to put weight on her right leg as she made her way back onto the court, limping to the baseline. Errani quickly closed out the game for the set.

As Williams made her way to her chair yet again, commentators on the world broadcast feed said there was no way Williams would be able to play another set and her retirement from the match would be imminent. Williams sat down, briefly put her head in her hands, and then stood up and started practicing her service motion.

Venus Williams was not going to quit. Not like this.

Playing in her 350th career match at a major, she had retired from a match just once, at the 2011 Australian Open. She wasn’t going to let it happen again.

For the next 31 minutes, the 40-year-old limped across the court, nursing her ankle with every step, but never losing any of her trademark intensity. Venus was unable to push off for her serves, so they were weakened as she remained flat on the ground. She struggled to get to the ball, but kept fighting, even staving off two match points in the final moments.

Williams lost the match, 6-1, 6-0, but managed to provide the most inspirational moment of the 2021 tournament thus far, enamoring viewers around the world with her perseverance and grit — a hundred million percent effort.

There is no shortage of inspiring moments in sports, but Williams added another to the list. Some competitors had more on the line than Venus on Wednesday, like Tiger Woods playing through a torn ACL and double stress fracture en route to a 2008 US Open victory, or Kerri Strug battling through an ankle injury to clinch a gold medal in vault at the 1996 Olympics. Others have had tough obstacles to overcome, like Alex Smith rebounding from a gruesome, near-deadly leg injury to become the Washington Football Team’s starting quarterback this season.

On Wednesday, Williams showed yet again why she is one of tennis’ greatest competitors and most committed players.

It is something she has done many times during her career. Diagnosed with Sjögren’s syndrome in 2011, three years after her last major singles title, many expected her to walk away from the sport. Instead, she made sweeping changes to her diet and dedicated herself even more to health and wellness. She then had one of the best years of her career in 2017, playing in two major finals and a semifinal.

Overshadowed at times by younger sister Serena and seeing lackluster results since that 2017 stretch, Williams has the second-most major titles on tour among active players (seven), but is largely overlooked these days. Her world ranking has fallen to No. 81, leaving her unseeded in Slams and often needing wild cards for entry at smaller tournaments. Speculation about her retirement seems to follow and grow after each loss, but when she is asked about her future, she explains that her passion for the sport remains strong.

“I love this game,” she said after a first-round exit at the US Open in August. “I’m good at what I do. It’s easy to stay motivated and excited about doing something so amazing. Not many people get to do this.”

She declined to speak to the media Wednesday night, instead opting for medical treatment. But to her peers on the tour, many of whom grew up idolizing her, Venus continues to be a constant source of inspiration as a result.

“I feel like whenever I see [Venus], it’s really amazing just to watch how much she loves tennis,” three-time major champion Naomi Osaka said after her first-round match Monday. “I see her smiling so much nowadays, so it’s really nice to see. She just has this aura of loving the sport and this infectious energy. I hope that I can learn a lot from her.”

McDonald’s is bringing back Hi-C