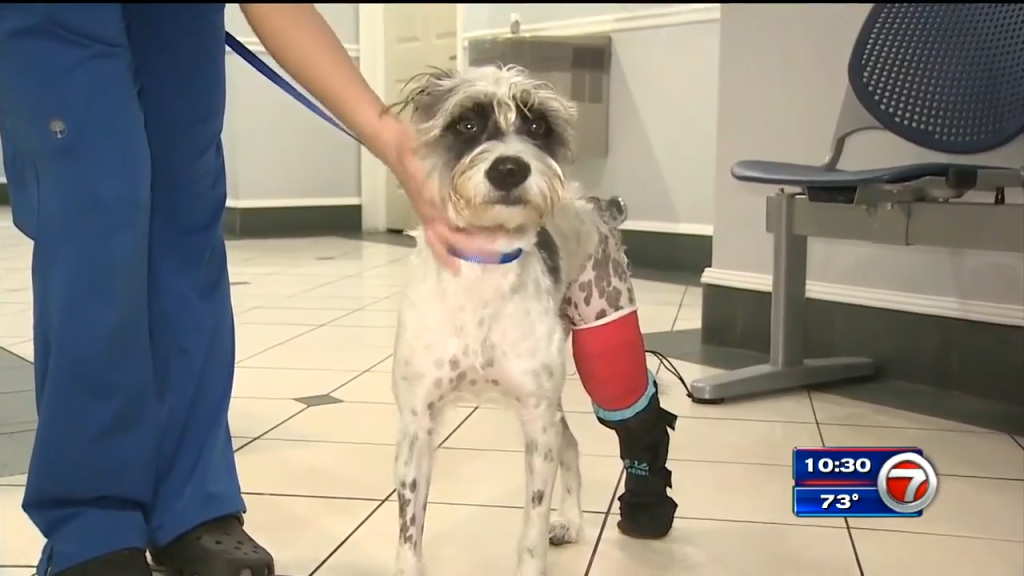 
SOUTHWEST MIAMI-DADE, FLA. (WSVN) – A dog is recovering from surgery at a Southwest Miami-Dade animal hospital after being bitten in the leg by a shark, and the dog’s owner said she needs help to pay for her pet’s medical bills.

Ana Maña, the 2-year-old dog’s owner, said the attack happened so fast, she remembers playing in the water one second before the shark bit her dog and let go.

“I really thought she was going to die right there in my arms,” Maña said. “There was a lot of blood in the water. It was like a trail of blood.”

Maña said the bite happened Monday when she and her dog, Boobie, were playing fetch in the water near Virginia Key. Then, a bull shark grabbed her dog and tore through her leg.

“She was screaming in so much pain,” Maña said.

Angelica Mousset, Maña’s friend, was with her when she saw the shark strike.

“I thought we had lost the dog at that moment,” Mousset said. “I grabbed a towel as soon as I could — like, first instinct: towel, wrap her. I grabbed the towel as fast as I could, and I wrapped her up.”

They then rushed Boobie to Miami Veterinary Specialists in Southwest Miami-Dade, where she underwent surgery.

“They had to rebuild her leg because the shark did get through the joint,” Maña said. “It opened up the knee joint. Her muscles are torn apart, her tendons, her arteries, everything was just chewed by the shark.”

Boobie has since been stitched up and will begin her long road to recovery, but Maña said she needs help paying the thousands of dollars it took to save her canine partner. Doctors said she will need at least $15,000 to cover medical costs and physical therapy.

Maña said the coronavirus pandemic took a toll on her finances. As a waitress, she does not believe she can foot the bill.

“We were nine, 10 months without a job, and I’m barely catching up,” Maña said. “Hard to say it. I’m not used to saying that I need help, but I guess I do. I guess I do need help.”

If you would like to help Maña pay for Boobie’s recovery, click here to be redirected to her GoFundMe page.

Copyright 2021 Sunbeam Television Corp. All rights reserved. This material may not be published, broadcast, rewritten or redistributed.