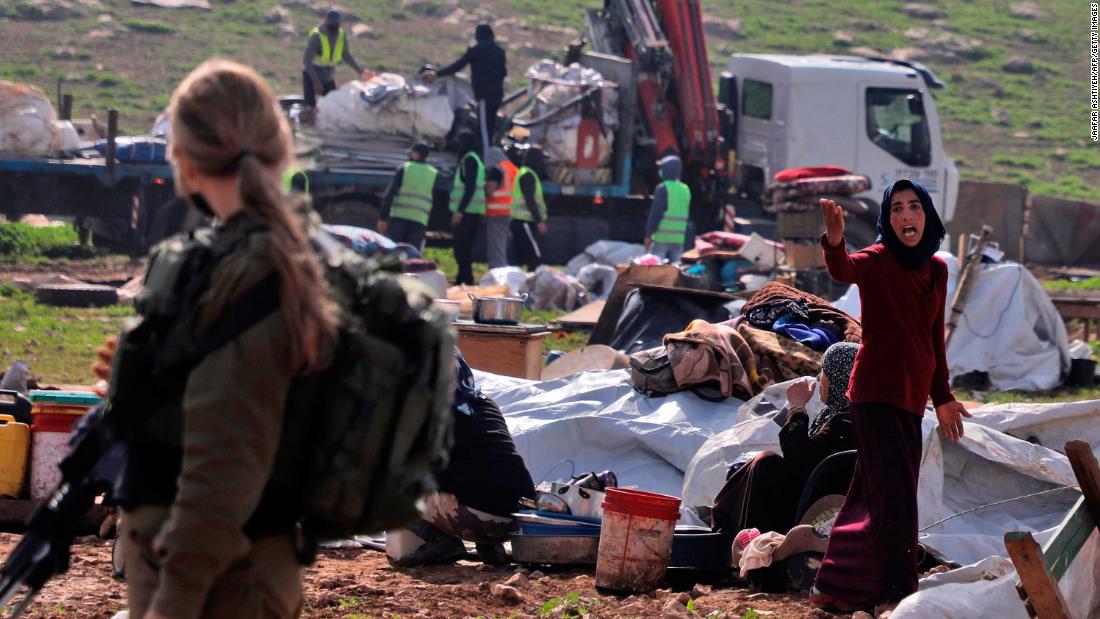 A couple of sofas sat around the embers of a fire inside the rectangular outline of what had once been a rudimentary home.

The large delegation of European ambassadors came in a convoy of SUVs that snaked along a dirt track through the nearby Jewish agricultural settlement of Ro’I, last week.

They parked a discreet distance from the Israeli troops who watched from the eastern edges of what had been a homestead. The diplomats picked their way through the twisted remains of corrugated metal roof panels, torn tents and a lonely fridge.

They’d driven out to drive home their dismay at Israel’s continued displacement of Arabs from West Bank land and more broadly on the ongoing expansion of Jewish settlements into the areas captured by Israel in 1967.

Aysha Abu Awaad walks bent double with great difficulty. She watched the arrival of the diplomats sitting on a cushion under an improvised awning, and flicked flies away from the face of one of her baby grandchildren who snoozed in a cot.

She says the last time the Israeli forces came “they told us that we should leave and that the land belongs to them and they need to train the army here.”

Israel has declared the area a “closed military zone.”

Military officials frequently make this declaration when they’re trying to clear areas of people they say are “squatters.”

Similarly, Palestinians, who’ve lived in parts of the south Hebron Hills for years, were forced out of the village of Jenbah when the area around it was declared a “training area,” part of a firing zone, last week.

As they left, Israeli armor were filmed by Israeli human rights group B’Tselem driving over crops and the roofs of homes built into caves.

Donald Trump’s administration broke with decades of US policy and said that Jewish settlements in the West Bank did not violate international law. This is out of step with the United Nations, the European Union, the United Kingdom, and most mainstream interpretations of the Fourth Geneva Convention which forbids land seizures and building in occupied territory.

President Joe Biden’s historically been a committed friend to Israel and backed the “two-state solution.” But he gave no hints as to whether he’d reverse the Trump view on settlements in his first foreign policy speech as president.

In Humsa, the EU delegate, Sven Kuehn von Burgsdorff, said: “We express our strong concern regarding the policy of demolishing residential structures of Bedouin communities who have been residing here for decades.

“And our concern is very simple. We are here to uphold international law, including international military law which forbids demolitions of residential structures in occupied territories. It’s contrary to the obligations [of Israel] under the 4th Geneva Convention evictions or forcible transfer likewise. Here we’re talking about 100 people, of whom 40 to 50 are children. We’re in the midst of a pandemic we are in the midst of winter-time. Where do these people go facing homelessness, facing winter?”

Mark Regev, a senior adviser to Prime Minister Benjamin Netanyahu, told CNN that the Israeli Supreme Court had ruled that the Bedouin here had no claim to the land and insisted that the court was entirely free from political influence, and the Palestinian leadership was using the Bedouin as pawns.

“The Israeli government was willing to go the extra mile here,” said Regev.

“We offered to relocate them, we offered to build them housing in another area. I think for political reasons the residents were not allowed to accept those proposals,” he said.

Regev also said that Israel was the recognized civil and military power in “Area C” of the West Bank, part of the land captured by Israel in 1967, under the Oslo accords of the 1990s.

The Oslo Accords were supposed to be a process of negotiated evolution leading to the end of Israel’s occupation and the birth of a peaceful Palestinian state alongside Israel. But, more than 25 years later, that’s a fading vision.

A group of Bedouin men sat on the ground outside a ring of delegates and press, muttering about how pointless the whole scene was.

“We don’t need water tanks or tents to be replaced. We need political support,” he shouted.

Decades of intermittent violence and logjams over the future of Palestinian refugees and their descendants claims’ to a UN-mandated “right of return,” the future of Jerusalem which both sides want as a capital, and the long-term status of the settlements, have not been cleared.

So, bitterness entrenches. And Israel’s expansion of the settlement project on the West Bank continues. Now, over 400,000 Israelis live in the West Bank — which was always opposed by the Obama-Biden administration, but embraced by Trump. And, with the fourth Israeli election in two years coming in March — many believe it’s a way for Netanyahu to solidify his conservative support.

In just the first 20 days of this year leading up to the Biden inauguration Israel announced plans to build another 3,352 settlement homes on the West Bank and in east Jerusalem.

Von Burgsdorff told CNN that he estimated that the EU, and bilateral donations, to the Palestinians by European nations was around $780 million a year.

With no faith that Israel and the Palestinians will move the peace process forward there’s a general acknowledgement by European diplomats that their money is being spent to keep Palestinians out of poverty and to dilute the influence of radical groups like Hamas, which rules Gaza, and is dedicated to the destruction of Israel.

“This is money that the Israelis would otherwise have to find since they do not take on the responsibility of ensuring the economic and social well-being of the 5 million Palestinians who have been living under occupation ever since 67,” von Burgsdorff said.

This has left the PA, as well as the Palestine Liberation Organization, which represents the Palestinians in negotiations with Israel, looking increasingly impotent in achieving independence.

Shtayyeh, who’ll be facing elections in May, led his own delegation to Humsa.

Since you’ve achieved so little perhaps it’s time to dissolve the PA and to give up? CNN asked him.

“We spent all our lives fighting for an independent Palestinian state that is sovereign viable and contiguous on the borders of ’67, with Jerusalem as its capital. We have achieved something. We didn’t achieve everything. The Palestinian Authority is not a gift from the Israelis to us. This is a culmination of our sacrifices so therefore we continue to give hope to our people,” he replied.

But that “hope” meant little to Aysha abu Awwad as the storm blew in and she was gently ushered into a tent donated by the Red Crescent while younger members of her clan struggled with tarpaulins and the rain began to beat down.

Abeer Salman contributed to this report.