When the Brooklyn Nets added James Harden to a roster that already included Kevin Durant and Kyrie Irving, the bookmakers in Las Vegas were quick to declare the NBA’s newest big three as the favorites to win the Eastern Conference, even though the Nets had started the season 7-6 and were in fifth place in the conference when Harden made his Nets debut.

League insiders, however, weren’t as sold on the Nets, who matched that 7-6 mark by posting the same record in their first 13 games after Harden’s arrival.

Along with the new-look Nets, the Milwaukee Bucks — who’ve had the best regular-season record in the NBA each of the past two seasons — received significant support as a potential Finals team. In ESPN’s conversations with 10 coaches, scouts and executives from across the league, there were as many as five teams other than the Nets that received some level of support for reaching the Finals, making this far from a one-team race.

Those six teams, Brooklyn included, break down into three tiers of East contenders, which could determine whether this Nets grand experiment ends in failure or results in the franchise’s first trip to the Finals since 2002.

The (flawed) teams to beat

Milwaukee still has the NBA’s two-time reigning MVP, Giannis Antetokounmpo, along with All-NBA forward Khris Middleton. And, after disappointing exits from the playoffs in each of the past two seasons, the Bucks added Jrue Holiday to help them take the next step.

“I think they’re really good,” an Eastern Conference exec said. “With Giannis, Middleton and Holiday, I think they have enough.”

In making the Holiday trade, however, the Bucks sacrificed the depth that had made them such a devastating force across the past two regular seasons — and the primary moves they did make with their second unit (signing D.J. Augustin and Bobby Portis) were to add offense-first players.

The team’s underlying stats reflect those changes. Milwaukee is first in the league in offensive rating; however, after leading the NBA in defensive rating in each of the past two seasons, the Bucks currently find themselves outside the top 10.

And, as people analyzed Milwaukee’s situation, several pointed to the team’s second unit as a concern, one that might be hard to address via trade, given that Milwaukee has less than $500,000 to spend below the NBA’s hard cap, according to ESPN’s Bobby Marks.

“Their bench needs to really step up and play better, but I’m not sure they can do it,” one Western Conference executive said.

Meanwhile, a troubling trend has emerged in Antetokounmpo’s struggles at the free throw line. He’s shooting 63.3%, fifth worst in the NBA among qualified players. He missed a potential tying free throw in the final second of Milwaukee’s season-opening loss to the Boston Celtics, raising questions about whether he can be a closer.

“Are you going to win with him shooting [63%] from the line?” asked an Eastern Conference scout. “That is a huge deal.”

“I just don’t know if Khris Middleton will be good enough to be the go-to guy down the stretch,” a West scout said. “Giannis clearly isn’t going to be it.”

Get access to exclusive original series, premium articles from our NBA insiders, the full 30 for 30 library and more. Sign up now to unlock everything ESPN+ has to offer.

With the trio of Durant, Harden and Irving, the Nets won’t have problems putting points on the board. The question remains, will they stop their opponents from doing so?

“I’ve seen James Harden defend,” the Western Conference executive said. “There have been times in the playoffs he’s really defended. Does he decide this is his chance? And can they get Kyrie to play defense, and [DeAndre] Jordan, and do they lock in and do it for two months? That’s the question. They’re not going to be able to sustain it.”

The loss of Jarrett Allen in the Harden trade has left Brooklyn particularly vulnerable at center. Jordan, a former two-time NBA All-Defensive Team selection, has been a liability on that end this season, ranking 60th out of 80 centers in ESPN’s defensive Real Plus-Minus. The two players backing him up, rookie Reggie Perry and the recently signed Norvel Pelle, have a combined 40 games of NBA experience.

The Nets gave up most of their tradable assets to acquire Harden, so their ability to address their needs at center via trade is limited. And, with so many more teams having the potential to be in the mix for a chance at the playoffs until the final days of the regular season because of the introduction of two extra teams qualifying for this year’s play-in games, some executives believe the buyout market won’t produce many options either.

Still, Brooklyn’s offensive firepower is undeniable — and might be unstoppable.

“I just think, at the end of the day, it’s going to require so much to stop those guys,” a Western Conference coach said. “I don’t know how teams will last for 48 minutes … you literally can’t double all three of those guys for 48 minutes.”

Lurking a level below

After missing nearly the first month of the season while strengthening his left knee, Kemba Walker made his season debut on Jan. 17. And while the Celtics dropped their first three games with Walker in the lineup, the point guard’s return has Boston being talked about as a contender again. With arguably the best collection of players to guard Brooklyn’s new big three in Marcus Smart, Jaylen Brown and Jayson Tatum, the Celtics had their fair share of backers to be a threat to win the East.

“I think Boston matches up better [against Brooklyn],” another Western Conference executive said. “They have those three guys [Tatum, Brown and Smart], they’ve got some different looks they can throw out there with their bigs. And the Nets can’t punish them [inside] anyway.”

Several people pointed to Walker, specifically, as the key to Boston’s season. Given the nagging issues with his left knee going back a full calendar year, there is skepticism he will maintain his health over the course of the next six months.

“Jaylen and Tatum are one hell of a pair,” another Eastern Conference scout said. “There’s very few I’d take over them. But I just don’t think they have the firepower to keep up with [the Nets]. I just have a lot of doubts. They need Kemba to be back to being peak Kemba. Otherwise, I don’t see it.” 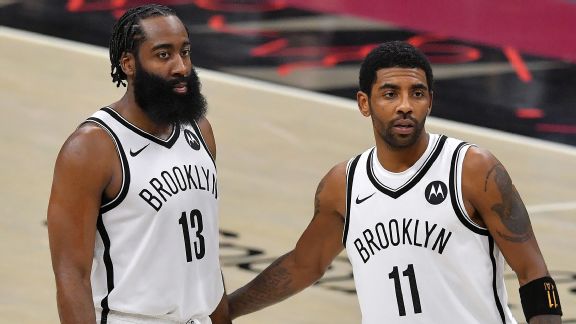 As with Brooklyn and Milwaukee, multiple people cited the Celtics’ depth as a potential issue preventing the team from reaching the Finals. The difference between Boston and those two other teams, however, is that the Celtics have avenues to address their issues. Boston has full control of all of its first-round picks going forward, in addition to the massive $28.5 million trade exception created in the offseason when Gordon Hayward joined the Charlotte Hornets as a free agent.

So while Boston has the makings of a contender as currently constructed, the moves the team makes over the next six weeks will go a long way toward determining how far the Celtics ultimately go.

For all the talk around Brooklyn, Milwaukee and Boston, it’s the Philadelphia 76ers who actually sit atop the East standings at the moment. Some league insiders see the 76ers as the team to beat in the East, largely because of how Philadelphia’s offseason changes have paid off.

“The biggest improvement for Philly, other than [hiring head coach] Doc [Rivers] and the respect he commands, is getting everyone back at their normal positions,” an Eastern Conference scout said. “Tobias [Harris] is at the 4, and now they’re not trying to play a 4 and two 5s at the same time.”

Rivers and new team president Daryl Morey ignored calls from outside the organization to break up the duo of Joel Embiid and Ben Simmons, instead choosing to remake the roster around them, shipping out Al Horford and Josh Richardson and bringing in Danny Green and Seth Curry.

Adding those two shooters to the starting lineup has opened the floor for Embiid, who is playing at an MVP level so far this season.

Gone are the days when Embiid was grumpy with the team’s offensive flow — which happened regularly last season — and in their place is a version of Embiid who is averaging career highs in points (29.1), field goal percentage (54.7) and 3-point percentage (37.7) and presents Philadelphia’s best option to attack Brooklyn’s biggest weakness.

“That’s where losing Allen hurts,” said the East scout, who pointed to Embiid’s interior game. “[Jordan] looks pretty cooked to me. I think [the 76ers] do have some bodies who will defend, [Matisse] Thybulle — guys they can throw at Harden defensively.”

However, questions remain about whether Embiid can maintain his level of play during the postseason, when the game slows down even further and being able to create one’s own shot becomes an even more critical skill.

And, if not Embiid, who will step up? Philadelphia traded for Jimmy Butler two seasons ago to fill that exact role, only to have Butler to leave in free agency a few months later. It’s a question teams are still waiting for the 76ers to answer.

“I’m just not confident in how that team is going to fit when the games get to that level,” the Western Conference executive said.

What about the reigning Eastern Conference champions, the Miami Heat? If the playoffs started today, Miami wouldn’t be invited — even with the NBA’s new play-in round extending to the 10th-place team in each conference.

And while multiple people were willing to give Miami a pass on its slow start due to several players — most notably Butler — missing significant time because of the NBA’s health and safety protocols, the question remains as to whether the Heat’s conference championship run was simply a matter of ideal circumstances.

“Last year was a fluke,” a West scout said. “I know everyone hates that word, but it’s true. The whole bubble was a perfect situation.”

Additionally, Miami losing Jae Crowder in free agency hurt in the eyes of several people. The Heat have struggled to replace him, with new addition Maurice Harkless shooting just 40% from the field and falling out of the starting lineup.

The Indiana Pacers, on the other hand, received near-universal praise for getting Caris LeVert and draft picks as part of the Harden trade, cashing in Victor Oladipo, who will be an unrestricted free agent after this season. The Pacers, whom the Heat knocked out of the playoffs in the first round last year, also were lauded for how they’ve started the season under new coach Nate Bjorkgren, with Myles Turner leading the NBA in blocked shots per game and Malcolm Brogdon and Domantas Sabonis both averaging more than 20 points. Ultimately, though, the majority of those polled saw the Pacers as having a ceiling as a very good, but not great, team.