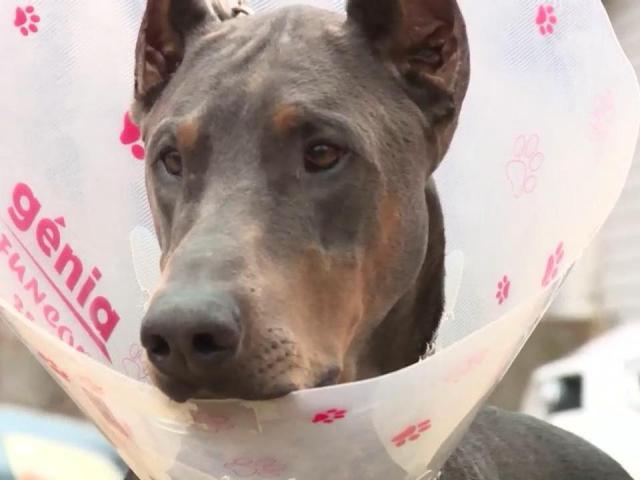 Roanoke Rapids, N.C. — A routine trip to the vet turned into heartbreak and a costly loss for a Roanoke Rapids dog owner.

Haley Plymale scheduled her 2-year-old blue Doberman, Hannibal, for a teeth cleaning, but he ended up in surgery. Plymale said he was mistakenly neutered at Creekside Animal Hospital.

“He is our first family pet. We love him to death. He’s a good-looking dog. I wanted a little piece of him to keep in the family forever,” said Plymale, adding that she had planned to breed puppies to keep and sell.

On Tuesday, when she took him to his appointment, she was not allowed inside the building as a COVID-19 precaution. Instead, she drove up and handed Hannibal over to a staff member.

“About an hour and a half after I dropped him off, the vet herself called me. I could tell she was really upset,” said Plymale.

She said the clinic’s owner, Dr. Cynthia Elias, told her one of the vet techs had made a mistake, and Hannibal had been neutered.

“She said this had never happened to her before. She sounded like she was in tears,” said Plymale.

Plymale said she thinks that the staff may have confused her dog with another Doberman, but she said the outside drop-off was also to blame.

“I think, had I been able to go inside the office with them and sit in a room and sign all the paperwork in there, and had the vet tech come to me and say, ‘Oh, he’s here for a neuter.’ I could have said, ‘No, you have the wrong dog,'” she added.

Clinic staff members said Thursday that Elias was the only person who could speak about the incident and that she was out of town.

On its website, the clinic describes itself as a “full-service, modern” hospital with a “highly trained staff.”

Plymale said while the vet did not charge for any of the procedures, it’s not enough.

Now, she wants compensation for what she lost, and she’s consulted with an attorney about seeking damages from the clinic.

“I spent a lot of time and money on this dog, and breeding him is something I really wanted. It was a goal of mine,” she added.